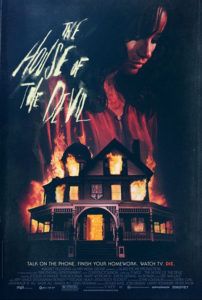 Consider The House of the Devil a detailed exercise in homage, rigidly adhering to decades-old cinematic archetypes. From the intentional grain that appears onscreen to the overly simplistic plot, from the dated décor and soundtrack to the poster design, everything about it feels born in the horror movie renaissance of the 1980s. If someone told you this was a long-lost flick from twenty-some years ago getting its rerelease into theaters, you’d have no choice but to believe them, since the filmmakers went to great extremes to devise and shoot a movie wholly rooted in its period of choice.

First-time director Ti West shows promise constructing an atmosphere of ‘80s horror, in that he has enough control over the cinematic apparatus to flawlessly replicate and employ B-movie tropes. The whole production is almost worthy of Grindhouse-like distribution. The only trouble is, his effective imitation contains no irony, nothing to signify that it’s a satire. In fact, it’s unclear if West even intends his film to be satirical—perhaps his intent was simpler, and he just resolved to make a clever simulacrum. That the audience isn’t sure either way is both problematic and a testament to West’s incredibly thorough (re)production.

One of those supposedly “based on true events” stories, this one concerns a common 1970s suspicion that satanic cults murdered people all the time and the government covered it up. But it also plays on the fear that babysitters make easy targets for sickos, setting up the story in complete Halloween mode. Quiet college student Samantha (Jocelin Donahue) hopes to get away from her flaky roommate by moving into a house for rent, but she’s struggling with money. A “Babysitter Needed” flier posted on the campus job board provides the answers to her problems. The job pays $100 for four hours of work. And here is where the dumb college kid comes out and says it’s too good to be true, but then proceeds anyway.

Her friend Megan (Greta Gerwig) drops her off at the creepy old country house in the middle of nowhere. Brooding shots of a nearby cemetery and a slowly mounting lunar eclipse let us know to be afraid. When they arrive, the man who hires her, Mr. Ulman (Tom Noonan), confesses something: She won’t actually be babysitting, rather watching over his elderly mother-in-law while he and his wife go out to see the lunar eclipse. When Samantha says she’s not interested now, he quadruples her money and promises to make it as “painless as possible.” Everyone in the audience laughs. Samantha doesn’t get the joke. Questions ensue: “Are you a teacher?” “No… Not exactly.” “Are you an astronomer?” “No… Not exactly.” The only thing Mr. Ulman knows is that “There’s a number for pizza on the frigerator.” He mentions it three times. Do you think he wants her to order pizza? (Note: If you’re making a low-budget movie and need a creepy character, get Tom Noonan to play him.)

Wandering about alone in the big dark house, with Night of the Living Dead the only thing on TV, Samantha gets a little unnerved. The senile mother-in-law keeps to herself; there are creaking wood floor sounds here and there, but mother is nowhere to be seen. All throughout the movie, Samantha keeps saying to herself “get a grip” when she’s scared. And for a while, we think it might all be just in her head. Until we see the shocking fate of Megan after she drops Samantha off. Until Samantha becomes drowsy when she eats that delivered pizza. Until the camera makes stark, unexpected pans glancing over bloody ritual leftovers. After all, it’s called The House of the Devil. But West doesn’t saturate his picture in bloodshed. He holds off until the last fifteen minutes before things go south, and when they go, it seems to end within a flash, before we have time to process what’s happened.

So what about the film has been stamped by ‘80s production values? The opening titles appear in a cheap ‘70s yellow. The electronic music and prominent use of The Fixx’s “One Thing Leads to Another” places the film around about 1983. Shoddy film stock. Post-Halloween scenario. Samantha’s feathery hair. A random, brief appearance by horror vixen Dee Wallace. It’s all very believable period flair inscribed into the filmmaking. West even takes it so far as to tell an unsatisfying story. Most ‘80s horror movies feel dated and tedious today, since we’ve been exposed to their schemes in a dozen rip-offs and retreads. West resolves to tell one of the stories that didn’t inspire, but was inspired by. Since he’s making an homage, is this an act of genius or just poor writing?

The audience remains involved by West’s minimalist approach until it’s revealed why Samantha was called there. Everything to follow is just horror embellishment, blood for blood’s sake, not very scary and at times throw-your-hands-in-the-air stupid. What’s worse is that because the plot seems to assert itself as a piece of conscious derivation, and because it’s vague if West intended this pseudo-tribute to be genuine or mocking, the only possible level at which audiences can enjoy the film is a technical one. And though we can look upon the result with admiration for how well it imitates, that’s just not enough.