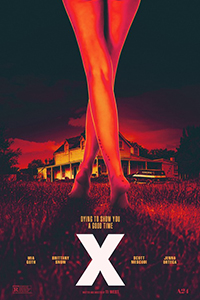 In Ti West’s X, an early scene finds an amateur film crew headed toward a rural Texas farm to shoot a skin flick called “The Farmer’s Daughters.” They approach an accident on the highway, where a commercial truck has pummeled a cow, leaving blood and viscera to be shoveled away by a road crew. The scene is a harbinger of things to come—the collision between the sexually liberated film unit and the repressed, God-fearing country, where they plan to shoot their adult film. The crash also remarks on the relationship between pornography and violence, how both induce a trancelike state from which a person cannot look away. Everyone has driven by a car wreck and found themselves compelled to slow down and gaze, mouth agape, at the live horror show. And many scholars have noted a similar effect in pornography’s all-encompassing display of fragmented bodies and ecstasy. West percolates these ideas under the surface of his latest and, thus far, greatest film, an inspired blend of Boogie Nights (1997) and The Texas Chain Saw Massacre (1974) that feels designed to trap its audience.

Setting out in 1979 to capitalize on the recent string of porn movies such as Debbie Does Dallas (1978) that have reached the curious mainstream, Wayne (Martin Henderson), an industrial district strip club owner, hopes to escape his meager Huston life. So he gathers some talent—two dancers, his girlfriend Maxine (Mia Goth) and Bobby-Lynne (Brittany Snow); an ex-Marine going by Jackson Hole (Scott “Kid Cudi” Mescudi); and two university film students, the director-cameraman RJ (Owen Campbell) and his quiet-but-inquisitive boom operator Lorraine (Jenna Ortega)—and heads to a rundown farm. Wayne has paid the elderly owner, Howard (Stephen Ure), to use a detached boarding house for the evening. Before long, they get down to business shooting their amateur production, with Howard none the wiser. But Howard’s creepy wife, Pearl, staring from an upstairs bedroom window like Ma Bates, takes notice (Goth also plays the old woman in a turn similar to Tilda Swinton’s dual roles in 2018’s Suspiria, which also feature Goth). All of this comes after X’s shocking prologue, where the local Sheriff (James Gaylyn), disturbed and almost speechless, examines the bloody aftermath—implanting a palpable sense of dread for the crew. 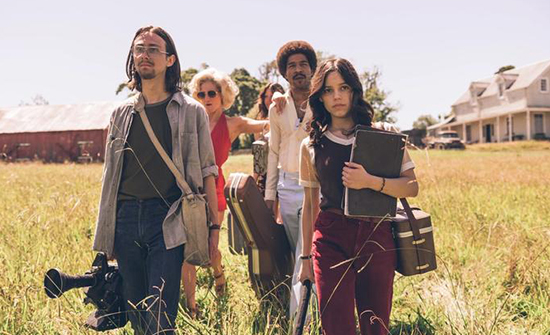 Slasher aficionados will recognize West’s familiar winks and nods to staples of the genre. Some of them are impossible to miss. The film’s young people in a van on a countryside road evoke the aforementioned Tobe Hooper classic, but not in the manner of most knockoffs. Take Netflix’s recent retconned sequel, Texas Chainsaw Massacre, which demonstrates only that its filmmakers have no grasp of what made the original so unforgettable. With X, West shows not only that he’s savvy and mindful of the genre’s history and aesthetic, but he’s able to replicate the mood without feeling overly derivative. There’s a fine line between a compelling homage and a tedious exercise in stylistic replication, and West achieves the former, even as he nods to Psycho (1960) and The Shining (1980). Elliot Rockett’s slick cinematography creates a lived-in quality. The patient editing by West and David Kashevaroff helps establish the characters and invest the audience while also savoring throwbacks such as wipe transitions and split-screen effects. Beneath the visuals, the haunting music by Tyler Bates and Chelsea Wolfe blends dread-filled tones with the sexualized moans of women, creating an aural fusion of desire and terror that plays into the film’s themes—not to mention our basest moviegoing appetites.

West also wrote X’s screenplay, and he avoids the same mistakes he made in The House of the Devil (2009) and The Innkeepers (2012), which rely too heavily on stylistic homage and self-awareness to be fully immersive. Although I’ve come to appreciate the charms of those films more since first reviewing them, West turns down the irony in X to allow his characters to live and breathe. The actors, too, resist winking at the camera or playing lifeless tropes. Goth, who has substantial horror cred, is rebellious and determined as Maxine, the resident final girl with “that X-factor,” as Wayne tells her. Henderson and Snow earn plenty of laughs as shamelessly horny entrepreneurs, as does Mescudi in his swaggering-veteran-turned-porn-star role. After appearing in 2022’s Scream, Ortega shows dimension as a reserved bystander who wants to get involved. Although these characters could have been played as caricatures, West and his actors bring more to them than surfaces, despite the familiar genre trappings.

When things get bloody—and boy howdy, do they get bloody—it’s not for the reasons you might expect. The old farmer and his wife, both under mostly convincing practical makeup, don’t have a side hustle producing cannibal chili or anything familiar like that. Instead, the old woman hopes to satiate her sexual desires. Her whole life, Pearl did everything her moral leaders told her to (evidenced by the omnipresent evangelical preacher on TV), and far too late, she realized her carnal desires were left unfulfilled. So now she kills young, attractive women whose beauty fuels her murderous and jealous anger. This leads to the film’s most unsettling scenes involving her sexuality—one with a sleeping woman, the other with her husband. However, West creates sympathy for a woman told that her feelings are taboo—especially at her age. X becomes a uniquely humanistic cautionary tale about the dangers of sexual repression, how vilifying sexual yearning and gratification, especially amid women, has consequences (see Newton’s Third Law). Then again, embracing sexuality doesn’t work out well for the victims in the end. 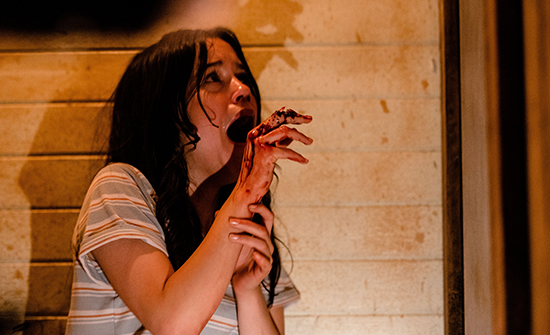 While its slasher elements prove cunning and entertaining, X’s protracted sex scenes, shot in a cheap yellowy style of the period, don’t embrace equal opportunity nudity. But when West shoots his female cast in ways that recall ’70s porn cheese, it results in comical, Boogie Nights-style scenes that feel more humorous than sexy. Though, there’s at least one desirous shot that captures Pearl’s gaze. By contrast, West presents male nudity as absurd, funny, awkward, and downright horrifying in one scene. West’s postmodern approach remains conscious about embracing the representational norms of early slashers—anything less, and it might have felt like a pulled punch—so his treatment of nudity feels like a knowing commentary rather than an exploitative choice. In that sense, West doesn’t restrain himself with X, especially not where violence and gore are concerned. The film boasts some of the most jarring and original onscreen deaths in recent memory, including a neck stabbing that tested this critic’s gag reflex. It also makes playful use of Chekov’s unloaded gun and an alligator (in a brilliantly squirm-inducing overhead shot).

After seeing countless slashers in recent years, many of which try to reproduce the glories of their betters with remakes, sequels, or today’s all-too-common requel, X feels like something fresh and alive. West draws from the classics, sure, but it’s evident he feels inspired by them rather than dependent on them. In this way, X belongs on a shortlist next to You’re Next (2011) and Strangers: Prey at Night (2018) as one of the most visually inspired slashers of the twenty-first century. Perhaps best of all, West has a perspective, even thematic agenda, which meditates on notions of sex and violence, liberation and repression, youth and old age—echoed by Goth’s dual roles. The collision of these extremes feeds into the film’s setting, making the 1970s more than just a superficial choice. What I loved about X is how much more West has on his mind than the typical slasher director. And while he gives the material substance, he doesn’t forget to deliver a visually inspired and frequently shocking experience. Most slashers perform on one or two of these fronts, seldom all of them, and rarely so well.