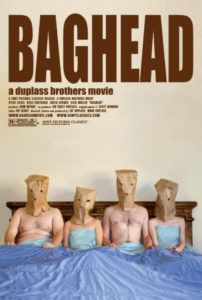 Making a movie is difficult. Aspiring filmmakers who’ve never tried it before think they can sit down with friends over a few drinks, or other substances, and crank out a screen story. After that, it’s just a matter of shooting. But the process of conceiving a good story requires more thought than saying, “We should make a movie.” It’s a painful and grueling—albeit fun—process, and I write that from my trifling experience of making merely a few embarrassing do-it-yourself short films. In 2008, Jay and Mark Duplass released a knowingly cheap and grainy effort with Baghead, a film that embraces the notion of a few friends getting together to make a movie, but also ponders whether such an approach doesn’t have a certain artistic hollowness. As an indie sleeper that never became a sleeper hit, the Duplass’ knowing and self-referential picture defies classification, effortlessly shifting tones from relationship comedy to slasher horror, while always nudging the audience to recognize the film’s self-awareness as an intentionally low-budget film-about-film.

While shooting their 2005 feature debut The Puffy Chair, a comedy that received generally favorable reviews, a conversation among the cast and crew sprang up, asking, “What’s the scariest thing you can think of?” When someone replied, “A guy with a bag on his head staring into your window,” someone else may have dismissed the idea with memories of Friday the 13th Part 2 from 1981. But the Duplass brothers took the idea and transformed it into a commentary on the process of low-budget filmmaking, an Éric Rohmer-esque examination of relationships, and an effective B-movie horror. Part of the mumblecore movement that includes directors Lynn Shelton and Joe Swanberg, the Duplass brothers once again demonstrate how the subgenre’s characteristics of natural performances and conversations about relationships harkens back to Rohmer and the French New Wave. They shoot fast and cheap, usually on digital, and are less concerned about formal technique than simply completing the shoot, resulting in an unpolished outcome.

Strangely, the relatively new mumblecore style also has a curious and unlikely link to the horror genre as well. Baghead remains one of the earliest examples, followed by Ti West’s The House of the Devil (2009) and The Innkeepers (2011), Adam Wingard’s You’re Next (2011) and The Guest (2014), and Patrick Brice’s Creep (2015), which stars Mark Duplass. Nevertheless, Baghead doesn’t quite fit into the sub-subgenre of these other “mumblegore” projects (as they’re often called). Many have argued the film isn’t scary at all, that it’s predictable horror elements have been added as a mere gimmick to draw audiences. I’d like to believe that the ever self-aware directors of Cyrus (2010) and Jeff, Who Lives at Home (2012) were smart enough to manipulate their audience into the film’s pleasant, funny moments of romantic awkwardness, as well as some effective uneasiness and jump-scares. Rather than trying to classify Baghead as one thing or another, let’s look at what it is. 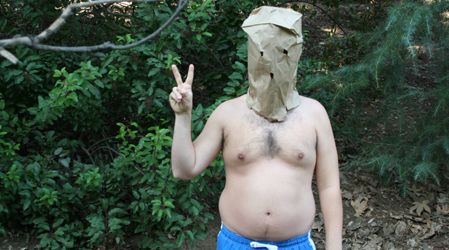 For starters, the film is shot without a score, and Jay Duplass’ wobbly camerawork looks like 1990s home video, albeit intentionally. Some shots are out of focus and others aren’t blocked well. Framing is not the concern of this film; ironically enough, it’s more about shooting quickly and sloppily to get the footage completed. And yet, this is done in part because a) Baghead is a very low-budget film and the finances require it, and b) this style of filmmaking is exactly what the Duplass’ intend to satirize. The story begins as our four characters sit at an indie film festival watching a black-and-white indie cliché called “We Came Naked”. During the post-show director interview, Matt (Ross Partridge) sits in the audience and watches excitedly, amazed the young filmmaker shot and completed the project for just $1,000. Matt wants to make a movie with his chubby best friend Chad (Steve Zissis). An opportunity presents itself, given both men have would-be dates on their arm—Chad courts the uninterested Michelle (Greta Gerwig), who’s carrying a torch for Matt; while Matt’s on-and-off ex-girlfriend Catherine (Elise Muller) still believes they’re soul-mates.

Matt suggests the four of them hole up for the weekend at his uncle’s cabin, where they’ll crank out a script to film starring (Who else?) themselves. Once there, their situation becomes instantly uncomfortable when Michelle endearingly remarks that Chad is the greatest because he’s like “a best friend and a brother,” and her affections for Matt become obvious to the jealous Catherine. There’s a wonderful display of the wounded crisscrossing of emotional and romantic conflicts between the four of them as they go swimming one afternoon. Matt and Michelle try to dunk each other, touching their swimsuited bodies under the water; Chad treads water halfway between them and the shore, where Catherine stands, exchanging glances of “Can you believe this?” with Chad. Writing on their proposed film goes slow, and ultimately stops after a few drinks. One morning, Michelle tells the others about a dream she had about a guy with a paper bag on his head, standing in the woods and looking at her as she threw up from the alcohol. Then again, was it a dream? Either way, Matt wants that idea to be their film, which in concept is very much like the film we’re watching.

Inevitably, the foursome continues to have their romantic ambitious squashed, which causes plenty of tension when they begin seeing a fifth person around the cabin—of course, it’s an eerie man in overalls and a bag over his head. By this time, however, the other four have tried to scare each other several times wearing a similar disguise. None of them are sure if the uninvited guest is part of an elaborate prank arranged by one of their own, or if the danger is real. It certainly feels real after the battery from Matt’s truck is stolen and various cords are cut, stranding them there. In typical horror movie tradition, Baghead also features plenty of false scares too. Fortunately, there are no cats hiding in the cupboard or failing flashlights, but the Duplass’ have a hilarious take on a familiar horror movie sequence where a couple is interrupted mid-coitus by the killer. Rather than interrupting a couple, the scene interrupts Matt as he masturbates following a sexually tense interaction with Michelle. And instead of the killer, it’s Chad and Catherine, both of whom realize the embarrassing implications of what they’ve done, as well as the palpability of the four’s strained friendships. 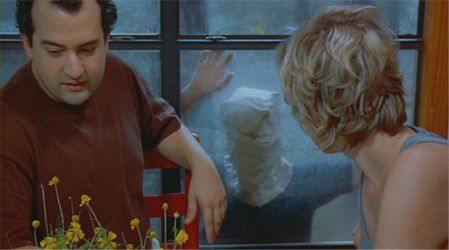 Fortunately, the Duplass’ characters aren’t the usual brand of stupid slasher horror teens who make all the wrong decisions once the film’s attacker shows up. They barricade the house, confront the attacker with a baseball bat, and finally try to walk together to safety. But they’re not dumb about it, and the naturalism of the actors makes the tense scenes more genuine. Zissis is particularly sympathetic, since he longs for Gerwig’s flighty character in a self-deprecating way. Partridge, whose character likes himself a little too much, gives Zissis some advice—telling him to be confident. “You will be mine,” Zissis later tells Gerwig’s character to her face. Meanwhile, Muller plays a nagging type, less dimensional or likable than the others. She appears older than the others and clings to them in a distant, holier-than-thou way. Overall, the cast presents a fascinating dynamic that resists pigeonholing any one character into a trope, even though they’ve written themselves into a formulaic story.

The Duplass’ are smart enough not to let Baghead devolve into a standard horror movie third act, regardless of the climactic scenes of the foursome running in the woods away from their pursuer. The film isn’t overly reliant on scares, so even if viewers guess the ending, there are plenty of rewards to be found in the characters alone. Sure enough, we discover Matt hired a friend to come dress up as a bag-headed killer, and all the while recorded the real-life reactions for a potential film. Chad had to be hit by an oncoming car to discover this, sadly, landing him in the hospital with a few broken bones. If you consider such a twist anticlimactic, you’re missing the point. Baghead was never about following a slasher blueprint, but about a brand of filmmakers making films just to make them. Many films made in this manner aren’t the smartest or most innovative films, yet they remain notable for ever getting made in the first place. Baghead is both an homage of such young filmmakers and a mild criticism of their lacking originality; it’s also a very clever film about relationships, with a few effective scares as well. However you categorize it—and I urge you not to—it’s not a film you’re likely to forget.