The Twin Cities Film Fest (TCFF) ran in a hybrid format from October 20 to October 29. This is the third and final dispatch of some initial impressions from my festival screenings. I will cover a few other films separately in full-length writeups. Also, check out Part 1 and Part 2. 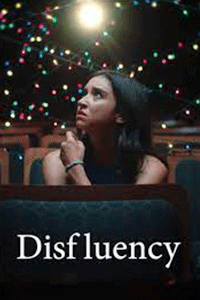 Disfluency
Director Anna Baumgarten’s Disfluency uses a linguistic term as a metaphor for our sometimes delayed response to trauma and how that can upset the course of our lives. The title refers to vocalized pauses such as “um” and “like” that so many of us involuntarily use as interrupters to our thought flow. “I’m sorry” is the term of choice for Jane (Libe Barer), a talented student who nonetheless just flunked her final undergraduate course—about disfluency, of course. After returning home to Michigan for the summer, Jane says “I’m sorry” as a reflex, and in turn, buries the reasons why she flunked. But with the help of some hometown friends and her sister Lacey, played by Libe’s real-life sibling Ariela Barer, Jane works up the confidence to tell people what happened.

Disfluency comes with a content warning that some viewers may find its themes difficult. Indeed, Jane confronts her repressed trauma with the suspicion that she may have been raped at a college party. Libe is particularly good in her scenes of teary recollection during an anxiety-ridden trip to the police station with her sister. And the off-screen relationship between the siblings helps give the sisters’ on-screen dynamic a naturalness—the best parts of the film are the scenes between them. However, the film’s dramaturgy and generic form resemble a production suited for a Lifetime Original movie or even a movie-of-the-week circa 1995. But that shouldn’t be held against it. Even if Disfluency feels maudlin and commonplace in its execution, the Barers sell every emotion in their performances, making the result undeniably effective. 3/4 Stars. 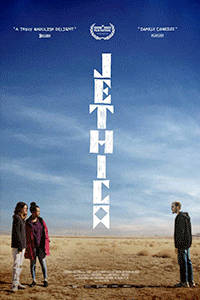 Jethica
A spooky little story that might fit better into an anthology TV series, Jethica runs 72 minutes and comes padded with long, ponderous scenes of the countryside and empty city streets. When it’s not filled with ambient scenery, the story follows a woman named Jessica (Ashley Denise Robinson), whose stalker, Kevin (Will Madden), has followed her across the country—he relentlessly calls her phone, leaving crazed messages in which he professes his love and personal sacrifice for her (“It’s fuckin’ Valentine’s Day every day for her, and she doesn’t appreciate it.”). His whiny-voiced lisp makes her name sound like “Jethica,” hence the mocking comic title. After Jessica runs into an old friend, Elena (Callie Hernandez), and explains her situation, they’re both confronted by Kevin at Elena’s grandmother’s home. But Jessica explains that it can’t be Kevin because she killed him. It’s Kevin’s ghost.

The screenplay, credited to four writers, establishes an apt metaphor for pathetic men so desperate for companionship and so terrified to be alone that they fixate on a woman. But the writing barely develops the characters and only thinly establishes the ghost rules. Still, Kevin’s appearance as a raving, dark-eyed specter has a haunting quality yet never quite manages to instill real menace. Moreover, in a curious framing device that goes nowhere, Elena recollects the whole story to a random hookup in the back seat of a car, which feels present if only to inject some sex into the proceedings. Director Pete Ohs creates a fine sense of deliberately paced mood and spare scenery, but Jethica feels like a basic concept that could have been fleshed out into something more substantial. 2.5/4 Stars. 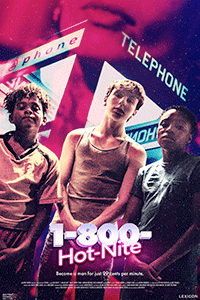 1-800-HOT-NITE
A phone sex hotline becomes a stand-in for a crisis call center in 1-800-HOT-NITE, a bad title for a movie that’s about more than the few phone calls made by the 13-year-old Tommy (Dallas Young) to a phone sex operator. Along with his two friends, Steve (Mylen Bradford) and O’Neill (Gerrison Machado), Tommy has a myriad of life-changing and scarring experiences one night in Los Angeles. When Tommy’s father is arrested for drugs, the boy avoids social services and escapes into the night, facing bullies, some radical white extremists, teenage girls, and his future in the process. When in doubt, he uses a stolen credit card to seek advice from Ava (Ali Richey), someone paid to talk dirty to random callers.

Although the movie is best when it follows the three boys’ bonding—such as a memorable scene where they declare “Fuck parents!” into the night—some of the detours feel forced into emotional breakthroughs. Most of all, the emotional significance of the central conceit—Tommy’s calls to Ava—prove unconvincing, even as they demonstrate that Tommy has no reliable adults in his life, and, therefore, must pay someone to fulfill that role. Elsewhere, a distracting anachronism reveals itself when the children use payphones to make the calls, suggesting we’re in pre-smartphone times. But when Tommy finds himself confronted by some conspiracy theory nutjobs, there’s talk of present-day “fake news” and cancel culture, making the movie’s setting unclear.

Writer-director Nick Richey yearns for something akin to Stand by Me (1986) that balances heavy themes of uncertainty, abandonment, and personal responsibility with the rambunctious energy of adolescent boys. But the material feels rather overdone in the wake of Stranger Things, Good Boys (2019), and many of the countless other boys-will-be-boys-type stories told in recent years. Even so, there’s some impressive nighttime cinematography by Nathan Presley that makes the movie stand out on a purely visual perspective, and many of the boys’ performances suggest they have promising futures. 2.5/4 Stars. 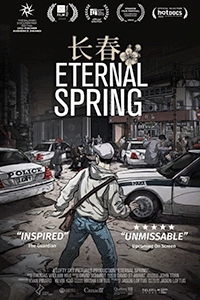 Eternal Spring
Canadian documentarian Jason Loftus takes a novel approach to his look at the engineers of the Falun Gong’s hijacking of Chinese state television in 2002. Loftus presents the Falun Gong as a religious movement rooted in “universal” ideals such as bodily health, serenity, and minimalist living—ironic, given the group’s far-right extremism in subsequent years. But in 2002, after China’s government banned the religion and persecuted its members, several of its members organized to break into the state TV signal in Changchun and broadcast a message about what the Falun Gong represents. However, the doc’s presentation of an underdog story about citizens who “dare to stand up to the party” omits some important information, even though it’s visually inspired.

The doc follows Chinese comic artist Daxiong, a member of Falun Gong, who interviews members of the hijacking party and draws from their accounts. Daxiong’s resulting art became the inspiration for the film’s animation, which crafts art “based on a shared memory”—an animation style that recreates the hijacking and looks like a generic Telltale video game. At the same time, the story unfolds like an Ocean’s caper, complete with team-member code names such as Guardian, Electrician, and Practitioner. The film shows the team creating their strategy and making schematics, and it builds to the suspenseful execution of their plan. In the aftermath, the story becomes a harrowing tale of religious persecution when the Falun Gong members and allies are arrested and tortured by state authorities, and many of them die in the process.

The film may be compelling and eye-poppingly inspired for what’s onscreen, but Eternal Spring is also quite troublesome for what it never mentions about the Falun Gong. The film would make a fine case study about the problem of accepting documentaries as unfiltered sources of non-fictional information. It conveniently avoids discussing how the Falun Gong have since founded the far-right Epoch Times media outlet, exploited Facebook advertising, spread anti-vaccination rhetoric, and fuelled Q-Anon misinformation since 2016. For that, Loftus’ biases as a filmmaker result in religious and political propaganda, with disturbing and deceptive tactics used throughout to sway his audience without prompting them to ask critical questions. 1.5/4 Stars.