The Twin Cities Film Fest (TCFF) runs in a hybrid format from October 20 to October 29. Order tickets or buy a streaming pass on the TCFF website, or check out the in-person screenings at the ShowPlace ICON Theatres at the West End in St. Louis Park, MN. I will review some films I cover in the dispatch separately in full-length writeups, but for now, here are some initial impressions of my first three screenings at the festival. 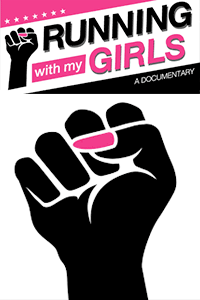 Running with My Girls
In Running with My Girls, documentary filmmaker Rebekah Henderson investigates how power, race, money, and privilege dominate American politics. In her first feature-length doc, Henderson points her camera at a grassroots cohort campaign in Denver, Colorado, headed by candidates Dr. Lisa Calderón for mayor, and Veronica Barela, Candi CdeBaca, and Shayla Richard for other leadership roles in the city. Tired of feeling unrepresented by elected leadership, these women of color resolve to take action and collaborate—even though none of them quite know what to expect from their respective campaigns, and even though they will face an uphill battle against discrimination and the political establishment.

Henderson’s four subjects, sometimes hailing from backgrounds that have required them to survive and endure, support each other through an eye-opening process. In most cases, they’re up against opponents who have no connection to the community, demonstrate problematic behavior, and have corporate interests—and so they have the money to buy advertising and run coordinated smear campaigns, thus controlling the message. In extreme cases, the women receive threats of death and rape from the opposition. And in all cases, Henderson’s subjects realize the extent to which politics is about money—money buys advertising, which buys votes, which grant power.

Although the filmmaking, graphics, and animated transitions look a bit rudimentary, they speak to the homespun quality of the film and its subjects outside the usual means of production. How fitting, since Henderson’s doc is about colleagues and friends—most of them removed from traditional political circles—who band together in the name of change. And, as every documentary is also about its making, Henderson—evidently close to the issues and her four subjects and their families—inserts herself into the doc by turning the camera on herself. She also serves as the narrator. Her perspective on Running with My Girls shifts from charting what it takes to run a successful campaign to looking at the bigger issue of American politics, sometimes with disgust. “I feel like I don’t have the stomach for this politics shit,” she remarks in a relatable moment.

The film is an inspiring look at determined women who help build, embolden, and represent their communities, even though sometimes it’s a losing battle. After one of her “girls” loses, Henderson breaks down and declares, “Politics sucks” It’s difficult to argue with her. Even so, CdeBaca observes after her win, “When we show up for ourselves, we have power.” That’s a simple but true message for marginalized communities around the United States aspiring to claim power and affect change. Running with My Girls is a natural underdog story for anyone not entirely exhausted by thinking about American politics at this point. 3/4 Stars 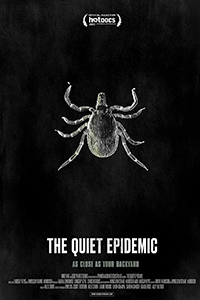 The Quiet Epidemic
There’s a subgenre of documentaries that might also be considered horror. Take Morgan Spurlock’s 2016 movie Rats, which works like an informative creature feature and certainly gave me the willies. For a certain kind of viewer, The Quiet Epidemic might be another gets-under-the-skin doc, albeit about ticks and the Lyme disease some of them carry. Fortunately, directors Lindsay Keys and Winslow Crane-Murdoch avoid dedicating much screentime to the parasitic arachnids and instead focus on a compelling human interest story rooted in medical science.

Central is Julia Bruzzese, a Brooklyn teenager who contracted Lyme disease at age 12 and has spent much of her life unable to walk as a result. Her father has taken her to countless doctors and specialists, many of whom misdiagnosed or dismissed the notion that she might be infected with Lyme disease. There’s also the late Dr. Neil Spector, who had Lyme but was misdiagnosed with heart issues. According to the doc, Julia and Dr. Spector are just two of the 500,000 cases of Lyme infections in America every year, “more than breast cancer and HIV combined,” says one talking head. This leads the filmmakers to investigate the medical establishment that downplays the significance of Lyme disease because of the unique way this tick bacteria works.

The Quiet Epidemic clearly breaks down the bacteria’s strange shape-shifting from a penetrative drill into a form that can imitate symptoms of other diseases. Because it’s not easily readable and because host reactions can vary wildly, the disease doesn’t behave like other bacterial infections. And so, the healthcare industry isn’t equipped to help people feel medically validated about their pain, loss of senses, brain fog, and worse symptoms that can accompany infection. All the while, the CDC and insurance companies have red-flagged Lyme disease because of its unpredictability, making treatment and coverage inconsistent. The filmmakers chart the historical reaction to the illness, acknowledging how new studies have proven that Lyme disease can survive initial antibiotic treatments, thus alerting the healthcare community and validating many victims.

The Quiet Epidemic is an unabashed message doc that uses talking head interviews, onscreen charts, documented evidence, and observational footage to make its convincing case. It should find a good home on Discovery+, Netflix, or a similar service. If its format isn’t groundbreaking, it at least effectively raises awareness about Lyme disease as a national issue—cases have appeared across the entire country, not just the northernmost states. Granted, I was already paranoid about and generally revolted by ticks, but this doc effectively accelerated my terror. 3/4 Stars. 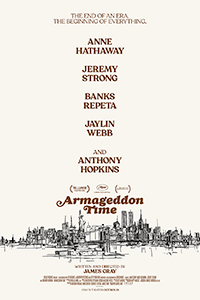 Armageddon Time
James Gray’s latest dramatic feature is a work of autofiction about a formative time in his young life. But it’s also about a period in American history when institutionalized racism would soon be emboldened by Reagan-era conservatism. One of the film’s final scenes shows the central Graff family watching Reagan win the election, ushering in an era perceived with doom over his policies and support from the religious right. As ever with Gray’s cinema, the writer-director weaves these themes effortlessly and symbolically into the narrative, which is focused on his 12-year-old counterpart, Paul, played in a natural and unaffected performance by newcomer Banks Repeta.

Gray looks at a Jewish family in Queens in 1980, openly based on his own—and, as in his films Little Odessa (1994) and The Immigrant (2013), the writer-director’s attention to the particulars of immigrant stories and ethnic communities is nuanced and wonderfully human. Paul, a daydreaming and artistic student with a penchant for getting into trouble, learns about his privilege compared to Johnny (Jaylin Webb), a Black student and close friend who doesn’t have the advantages of Paul’s family and receives prejudicial treatment in class. Gradually, Paul begins to recognize how he’s treated compared to Johnny by their harsh public school teacher, fellow students, and even his parents (Anne Hathaway and Jeremy Strong). But he doesn’t yet have the confidence or social clarity to stand up for his friend.

Much of Paul’s awakening is brought about by his ailing grandfather (Anthony Hopkins), who encourages Paul to follow his dream of becoming an artist. But he also wants Paul to have a good education and helps guide the boy into a prep school backed by the Trumps—leading to Paul’s initial encounter with Fred Trump (John Diehl), where the man asks, “What kind of name is [Graff]?” proves telling. Here, Paul witnesses the seeds of institutional racism, begins to see how the world works concerning power and race, and learns from his grandfather the most crucial lesson of all: “Fuck ’em.”

Filled with lived-in performances and a deep sense of Gray’s personal expression—complete with a touch of whimsy that recalls the cinematic fantasies of Federico Fellini and Pedro Almodóvar—Armageddon Time is a beautifully crafted and acted film. It’s measuredly paced and unfussily shot by cinematographer Darius Khondji, whose color palette for New York in autumn has a welcoming, nostalgic effect. The story can and has been mistaken as a simple coming-of-age yarn. Still, like most of Gray’s work, there’s more beneath the surface that reflects the sociopolitical implications for America in the decades to follow. 4/4 Stars.