Every year, the equally painstaking and pointless task of creating a year-end Top 10 List fills me with frustration and dissatisfaction. Frustration because I realize this list is fleeting, and my current estimation of the year’s films may change sooner than later, as one’s appreciation of art tends to change over time. Dissatisfaction because I’ve had to omit a number of outstanding films from my Top 10, including the difficult choice to exclude Eighth Grade, The Favourite, Roma, and Widows (to name a few) from the list—all of which were included in the Top 10 at some point during the listmaking process. In any case, this is my list. It is not perfect but it is mine. Share yours below. 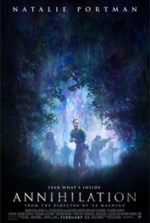 10. Annihilation
What I love about Alex Garland’s second go-round as writer-director isn’t merely that he put together a smart, thought-provoking entry into the science fiction genre. It isn’t just that Annihilation boasts an impressive female-led ensemble (starring the likes of Natalie Portman, Jennifer Jason Leigh, Gina Rodriguez, Tessa Thompson, and Tuva Novotny), which is rare for the genre. And it’s not only that the film contains unforgettable imagery that haunts the mind for long afterward. Of course, all of that is significant enough, but those details aren’t what made the film transcendent for me. It’s that Garland was able to make a film that argues on behalf of Nature and naturally-occurring evolutions, even if they’re extraterrestrial. It finds beauty in what human beings might consider the horrifying process of Nature running its course, despite our wishes. And it accepts, even finds a kind of strange harmony in, our destruction. How many films have ever embraced the sublime to such a degree? 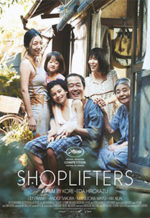 9. Shoplifters
Winner of the Palme d’Or at the 2018 Cannes Film Festival, Shoplifters is a subtle rumination on the nature and structure of families, made with sensitive observations by Japanese director Hirokazu Kore-eda. The story follows a group of misfits and outsiders who band together to form a makeshift family, though they barely make it together, relying on a combination of petty theft and thankless employment to survive. It all has an air of harshness and temporariness that nonetheless contains genuine love, despite their sometimes sordid and unsavory origins. But when compared to the biological family alternative, which, in the examples shown in the film, is a cruel and thankless option, the fleeting chosen family is deepened and more meaningful. There’s something incredibly touching about Kore-eda’s representation of how people have a way of finding what they need. And for anyone who has felt a part of their own personal family comprised of friends over blood relations, Shoplifters will resonate in profound ways. 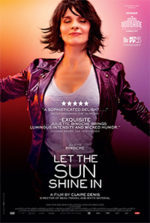 8. Let the Sunshine In
On the surface, Let the Sunshine In (Un Beau Soleil Intérieur) might seem like an airy romantic comedy in a decidedly French style—where a hapless, lovelorn character sleeps their way through several partners, looking for that perfect someone. But director Claire Denis and star Juliette Binoche transform the material into something at once breezy and deceptively simple, giving way to a somewhat tragic, almost comical portrait. Binoche plays Isabelle, an artist and divorcée whose emotional optimism and innocent desire for a human connection land her in a series of disastrous relationships. The story—inspired by Roland Barthes’ A Lover’s Discourse: Fragments, a collection of the author’s thoughts about love and relationships—follows Isabelle as she drifts from one failed relationship to another. The inherently episodic, intentionally unsatisfying plot is enhanced by Binoche’s outstanding performance, and how some of the most compelling aspects and tensions in her character are played under the surface. It’s a thoughtful, intimate film that seemed to grow in the days and weeks after I watched it. 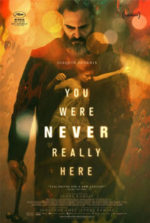 7. You Were Never Really Here
Scottish director Lynne Ramsay has made only four films—including Ratcatcher (1999), Morvern Callar (2002), We Need to Talk About Kevin (2011)—and You Were Never Really Here might be the best of them. Although its plot synopsis reads like a typical thriller of the post-Taken variety, Ramsay and her star Joaquin Phoenix create something primal, impressionistic, and volatile. Phoenix stars as Joe, a tough fixer who specializes in punishing sex crimes and kidnappers. He’s tasked with locating a senator’s daughter, who has been sold into a sex-trafficking ring. But Ramsay’s departures into Joe’s fractured headspace result in a complex character study, enhanced by the fragmented structure and Johnny Greenwood’s pulsive score. It’s a disturbing and sensitive picture that lingers in the mind long afterward and rewards repeated viewings. 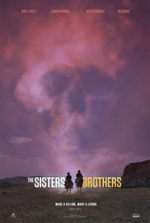 6. The Sisters Brothers
I loved The Sisters Brothers, one of 2018’s most underseen and underappreciated releases, and one of the best Westerns of the twenty-first century. Based on the 2011 novel by Patrick Dewitt, the film marks the first English-language feature from French auteur Jacques Audiard, director of A Prophet (2009) and Dheepan (2015). John C. Reilly and Joaquin Phoenix, cast to their strengths, play the titular hired guns—the former ready to settle down and have a more traditional life, the latter content with drinking and killing his time away. They’re tasked with locating a target, and before long they encounter Jake Gyllenhaal and Riz Ahmed and discover a chance at a different life. This affecting and often funny picaresque weaves its way through three-dimensional characters, revisionist Western tropes, and Audiard’s signature blend of violent realism and personal fantasy. Through it all, Audiard creates and his cast inhabits unforgettable images—shootouts in the night, burning horses, a swallowed spider, and gold illuminated in a river. 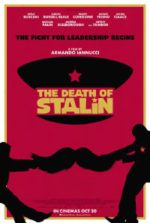 5. The Death of Stalin
Several films attempted to satirize or comment on the ridiculousness of politics, especially in the wake of Donald Trump, Adam McKay’s Vice and Michael Moore’s Fahrenheit 11/9 above all. Oddly enough, none felt so vital as The Death of Stalin, a brilliant comedy from Armando Iannucci, creator of The Thick of It (2005-2012), Veep (2012- ), and his previous film, In the Loop (2009). Set in the Soviet Union of 1953, the story follows Stalin’s inner circle as they scramble for power in the aftermath of their leader’s death. Based on actual events, albeit condensed for comic effect, it charts the blind faith maintained by politicians, and how that faith ultimately betrays the most devoted, while resulting in a wealth of horrors and atrocity in the name of towing the party line. Steve Buscemi, Simon Russell Beale, Paddy Considine, Rupert Friend, Jason Isaacs, Michael Palin, and Jeffrey Tambor deliver Iannucci’s clever and acerbic dialogue in what may be the most accurate depiction of today’s political climate. 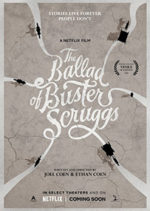 4. The Ballad of Buster Scruggs
Joel and Ethan Coen specialize in films that draw the viewer in with their humor and pure entertainment value, and then along the way, turn out to be profound ruminations on philosophy, identity, country, and film history. Released by Netflix, The Ballad of Buster Scruggs is another in a long line of Coen pastiches, assembling six stories of the Wild West that range from a cartoonishly violent musical to a supernatural journey into the spirit world. Similarly, the Coens embrace Western genre styles that extend from Gene Autry and Sergio Leone to modern examples from Kelly Reichart to Quentin Tarantino. By along the way, the Coens take us deeper into an overarching exploration of life, death, and the choices we make in-between. Each story, while referential, also has a familiar style used in the Coens’ other work, making the film an aesthetic and thematic compendium. Of the stories, everyone has their favorite, and mine remains “Meal Ticket”—an achingly cynical tale about how human beings will exploit each other for the smallest of advantages. 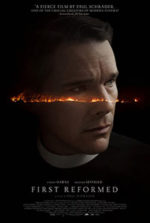 3. First Reformed
Paul Schrader investigates modern anxieties about environmental collapse, political corruption, questioned faith, and corporate influence on religion in First Reformed, resulting in a strange and thoughtful psychological examination. Ethan Hawke, giving perhaps the finest performance of his career, stars as Father Toller, a man who uses religion and a sudden interest in environmentalism as a buffer to keep himself from feeling. In true Schrader form, reminiscent of his characters from Travis Bickle to Yukio Mishima, Toller begins a diary that exposes and augments his inner torment. Schrader reflects this with an austere application of form, from long transcendental shots to his use of the boxy Academy aspect ratio. Most telling is the controversial ending that leaves the conclusion up to the viewer to interpret. However you see the final shots and what they say about Toller’s choices, Schrader decries extremism in extremist times, warning that too much passion about the issues of the day will distract you from what matters in our fleeting existence. It’s a searing, evocative film that, through its raw and rather punishing veneer, has a quite sensible lesson. 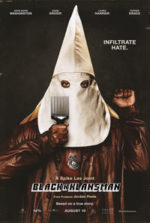 2. BlacKkKlansman
BlacKkKlansman is among Spike Lee’s best films, somewhere in the realm of Do the Right Thing (1989) and Bamboozled (2000). Like those earlier titles, Lee juggles a dizzying array of genres, themes, and motivations into an angry work of sociopolitical commentary and entertainment. John David Washington makes a star-making breakthrough in the true story of Ron Stallworth, a black detective in the Colorado Springs Police Department who, in 1972, infiltrated the Ku Klux Klan. But from the first images onward, it’s clear that Lee has more on his mind than simply a provocative detective story—although, it’s incredibly enjoyable on that level as well. Rather, the film has much to say about historical and contemporary America, as it connects a racist history to the racist present, drawing parallels between the heyday of the Ku Klux Klan to the 2017 Unite the Right rally in Charlottesville. In a year of great films about the black experience (see Blindspotting, Sorry to Bother You, Widows, etc.), BlacKkKlansman was the greatest.

1. Zama
I spent a lot of time with the films of Lucrecia Martel in 2018. After seeing Zama, I was transfixed, as well as compelled to watch Martel’s other three titles—La Ciénaga (2001), The Holy Girl (2004), and The Headless Woman (2008). Each is a social drama that dissects class in Argentina’s contemporary Salta region. But her latest, based on Antonio Di Benedetto’s novel from 1956, is something altogether uncanny and unique. It tells the story of Don Diego de Zama (Daniel Giménez Cacho, absolutely brilliant), an eighteenth-century Corregidor in the Spanish Empire. He’s a character outside of time, removed from his race and culture, and floating through life with pretensions and unsatisfied appetites. Martel follows his nine-year descent as he waits for Spanish bureaucracy to free him, which it never does. The experience, a blend of historical fiction and almost fantastically immersive subjectivity, must be viewed and even researched to be fully appreciated beyond its surface—and what a surface, composed of exquisite natural settings, punishing situations, and unforgettable imagery. It’s recommended that you read the novel, barely known in English-speaking countries, and watch Martel’s other films to grasp her style before tackling Zama. This is a film that requires the viewer to investigate, penetrate, and consider for countless hours, yet it continues to reward as the best, most enduring films do.