Having made the fortunate decision to first see The Hobbit: An Unexpected Journey projected in two dimensions at 24-frames-per-second, which have been cinematic standards for more than a century, I loved returning to Peter Jackson’s vision of Middle Earth. This was a minority opinion among critics, possibly because press pre-screenings featured Jackson’s new 48-frames-per-second presentation (also known as High Frame Rate, or HFR) in 3D. Although Jackson’s latest technological innovation interested me, I wanted to experience the film on its own, without 3D or some unfamiliar flourish dampening the experience. Since then, I’ve noticed how low the Rottentomatoes score was—in the 60% range—and read many reviews only to find the film was being judged more for its use of HFR than the quality of the filmmaking, with just a few critics able to see beyond the new format, and even fewer still enjoying it. As my original review of The Hobbit was based on a standard presentation, belated as it may be I will now offer my thoughts on 48fps. 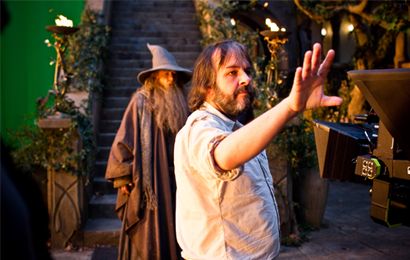 For the few who don’t know, as stated, cinema has been projected at 24fps since its inception. Jackson chose to shoot and in select theaters project The Hobbit at 48fps to create a sharper image. More frames-per-second means more information on the screen; the benefit being more detail, crisper resolution, and a deeper depth of field. The method also helps eliminate some of the blur associated with 3D projection, especially in fluid camera scenes. Jackson’s argument remains that HFR looks more realistic and repositions cinema into the real world. But then if we wanted the real world, we wouldn’t be going to the movies, would we? HFR creates a lifelike appearance through enhanced details, but there’s a limit on how much detail an audience needs, and also the kind of detail required to maintain the look and feel of cinema.

As the lights dimmed in my local AMC theater and the image onscreen shifted from standard to HFR, the format was instantly noticeable, and distracting. The first thing we see in The Hobbit is the MGM logo, which looked strange to me. My immediate suspicions were confirmed the next moment when the Warner Bros. logo appeared. Both looked pristine in their color quality and sharpness, but the film speed moved with an unnatural urgency, even if it takes the same amount of screen time as 24fps. With more frames per second, the camera picks up every little movement, every flicker of light, every millisecond of motion. Each movement or action has a series of microscopic steps; with HFR there are more steps on display, and so movements appear almost overemphatic compared to what the moviegoer’s eye is accustomed to. The effect looks like a home movie or even a production of The Metropolitan Opera live in high-def.

Whenever the camera moves or any motion whatsoever occurs, the format becomes readily apparent. Shorter cuts feel like jerky flashes on the screen, whereas longer tracking shots give more time to acclimate. Stationary shots allow one to absorb the enhanced detail of a given frame, but heightened detail isn’t always a good thing: My eyes became aware of every strand of hair, every blade of grass, every pore on the actors’ faces. The level of detail was astounding, but the movements and figures onscreen looked too real for cinema. The painterly textures of a motion picture have been washed away and only the film-as-a-production is left. As though I was watching a behind-the-scenes documentary filmed with a digital camera, I soon realized that every set-piece, spotty bit of makeup, and thread of costuming was observable. In some cases, CGI effects and characters (particularly Gollum and the White Orc) looked more realistic, if plastic, whereas other sequences look more like a videogame. 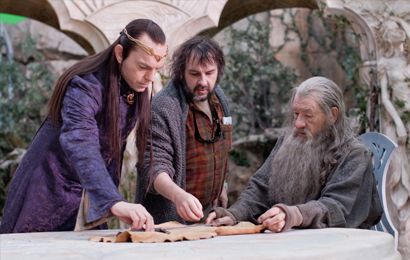 In short, I did not feel transported the way I had during my 2D screening of The Hobbit. If you want to experience HFD for yourself but don’t want to drop $15 on a 3D/HFR movie ticket, most HDTVs have a setting that will mimic the effect. They might call it “motion control” or an “up-conversion setting” or “digital display”. Test it out for a few minutes (and then, for the love of God, set your TV back to the standard display). Or, when you enter any Best Buy’s home theater showroom, most of their TVs will be calibrated to this setting. Some will not. Stand back and compare them and you’ll notice how incorrect this effect looks. It doesn’t have the smoothness of cinema. Some HDTVs come with this setting already engaged, which means any discerning viewer needs to adjust their television to make it look the way filmmaker—Jackson aside—intended.

If its main benefit is supplying 3D with fewer distortions, then here’s hoping the industry’s tech wizards simply improve their 3D technology instead of meddling with frame rates. In the end, 48fps eliminates our suspension of disbelief. Because everything looks more real, we become instantly and irretrievably aware that it is not. Motions and details presented in HFR may supply more information, but it’s an unneeded excess that distracts from the screen story. Perhaps a documentary or television broadcast might benefit from HFR resolution, but not fiction, and certainly not a sweeping fantasy like The Hobbit. The use of HFR technology is not just a matter of growing accustomed to a new advancement in cinema, such as optional 3D presentations were. Quite simply, it’s a format that goes against the fundamental appeal behind the art of all motion pictures.