The trouble with The Art of Epic is how distributors at Titan Books have released it a month prior to the film’s release, making readers wait an achingly long time to see the May 24th release. For this, you’ll be shaking your fists at Titan but hotly anticipating the first big animated film of summer 2013. Distributed by 20th Century Fox Animation and Blue Sky Studios, the creators of Rio and the Ice Age franchise, the film follows a young woman whose eccentric father discovers a magical, miniature, warring world in the backyard forest. With strains of Avatar in the storyline and visual design, this will no doubt be one of the biggest titles of the summer.

Based on William Joyce’s book The Leaf Men and the Brave Good Bugs, the film has been in production for over six years since its announcement in 2006. As the foreword written by director Chris Wedge (helmer of Robots, another Blue Sky release) suggests, the book-to-film translation began unsteadily but slowly evolved into something that, according to the pages in The Art of Epic, looks fantastic. The Blue Sky animation team has conceived the scope of their adaptation on a huge cinematic canvas, imagining a forest world from a microscopic point of view in the book’s 300-plus concept designs, storyboards, and sketches. Wedge recalls going into woodland areas and shooting test footage from the ground floor, trying to achieve an ant’s perspective with a camera, and running into trees over his immersion in the forest world.

As a result, the book shows landscapes that resemble James Cameron’s Pandora, huge and ornately designed by Blue Sky’s development team. The colors are bright greens and yellows with an appropriate foundation of earth tones. In the story, a human woman is magically shrunken down and discovers an army of Leafmen who battle against the forces of decay, known as Boggans. For some, the Leafmen will quickly resemble elves from The Lord of the Rings, while Boggans look suspiciously like orcs or goblins. Nevermind their influences. Author Tara Bennett tracks how Wedge and his team made tiny weapons out of toothpicks, metal, and string to conceive of miniature weaponry, and further based their visual designs on samurai, Native Americans, and in one case “Orson Welles as Falstaff”. 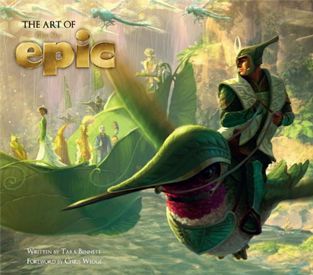 Though most of the pages show concept designs for individual characters, in the backdrop of those images, and also featured in their own sections, are segments on how Wedge’s team has ornamented Nature. A leaf becomes a huge barge to cross streams; wisps of dead grass are hollowed out to become castles; a brook trickling over some rocks turns into a waterfall; a hummingbird or mole transforms into a horse-like mode of transportation. Much of this comes from Joyce’s book to be sure, but the animators have turned Joyce’s stylized designs into a polished and realistic representation of the natural world. Joyce, author of Rise of the Guardians and concept designer on A Bug’s Life, should be proud of his book inspiring Blue Sky to create such a detailed and gorgeous world of light and color.

To be sure, everything within the pages of The Art of Epic suggests the film will be a fine animated adventure. The story is accessible, looks exciting, and the environmental commentary is palpable. Wedge seems a capable director and has an impressive voice cast to support his work (including Amanda Seyfried, Colin Farrell, Josh Hutcherson, Christoph Waltz, Aziz Ansari, Chris O’Dowd, Pitbull, Jason Sudeikis, Steven Tyler, and Beyoncé Knowles). Everything appears set for a wondrous motion picture. Now the only thing that could sour such excitement is the screenplay by Get Smart writers Tom J. Astle and Matt Ember. Wedge’s film could look great, but Blue Sky’s track record for successful-yet-forgettable animation is less than spectacular. Even so, if the film lives up to even half the potential shown in this book, we’re all in for a treat come May 24.

Thank you to Titan Books for sending a review copy of this book. Order it from Titan’s website.