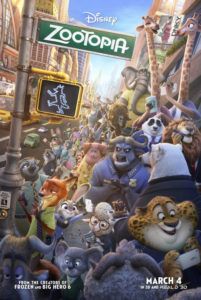 Think about when the last time a Disney animated feature addressed issues of race and gender equality. Amid sore spots such as Song of the South (1946) and Dumbo (1941), maybe only The Princess and the Frog (2009) comes to mind. Going a long way to correct its past crimes and distance itself from typical princess fare like Frozen (2013), Disney’s Zootopia offers a twisting cop story in the vein of Chinatown (1974), but told in a modern world populated exclusively by animals. It’s a place where mammals of all shapes and sizes coincide in peace, where the mayoral lion (voiced by J.K. Simmons) works alongside his assistant sheep; where the titular city’s motto proclaims, “you can be what you want to be,” regardless of whether Nature designated you predator or prey. Animals have evolved beyond the otherwise ingrained rules of the animal kingdom, so if you’re a fuzzy-wuzzy bunny and you want to become a cop, you can do just that.

Such is the aspiration of young rabbit Judy Hopps (voiced by Ginnifer Goodwin, who stars as Snow White on TV’s Once Upon a Time), a country girl who dreams of moving to the big city, where she hopes to dole out law and order behind a badge. She demonstrates her moxie in an early childhood scene where she breaks up a conflict between a bully fox and three meeker animals. Ever since, she and her family have had an unfortunate prejudice against foxes, which Judy, who graduates at the top her police academy, tries to dispense with before she moves to serve in Zootopia. In a police force dominated by bears, rhinos, and elephants, and overseen by a towering cape buffalo, Chief Bogo (Idris Elba), Hopps will be something of a joke. But Hopps has told herself, “I wanna try even though I could fail,” as suggested by the corny “I want” song by Shakira, via her pop-star character Gazelle.

Likewise, the filmmakers of Zootopia have tried to accomplish a lot for one animated feature, and fortunately, their only failure is including Shakira’s music twice in their film—early on in Hopps’ above-mentioned arrival in the city, and again over the end credits sequence. Everything in-between is effortlessly charming and gorgeously animated, as well as just plain good storytelling. A trio of directors including Byron Howard (Bolt), Rich Moore (Wreck-It Ralph), and Jared Bush also share writing duties with Phil Johnston and Jennifer Lee. That would otherwise be a lot of talent for traditionally singular roles, but there’s also a lot happening in the film. Bustling sidewalks of giraffe food vendors, hippo drying stations, and tiny mouse cars lend an incredible amount of detail to Zootopia. Lively characters rooted in established crime tropes purvey the story. And significant lessons about people amounting to more than what’s been customarily expected of them drive this progress-minded picture.

At first, Chief Bogo assigns rookie cop Hopps to parking-meter duty, a job she resents because she’s clearly being discriminated against for her size and gender. When, in a bid to prove herself, Judy stakes her job on cracking a case of missing mammals, she enlists the help of an unwilling cohort: a sly, grifting fox named Nick Wilde (Jason Bateman). Their investigation leads them to various familiar scenes, each paying tribute to well-known cinematic crime stories. They enter the office of an arctic shrew straight from The Godfather; they find a lab run by a sheep under a yellow jumpsuit, and this Breaking Bad reference comes complete with colleagues by the name of Walter and Jesse. This wouldn’t be the first time Disney combined animation and crime into a fascinating mix. The classic Who Framed Roger Rabbit (1988) explored similar terrain in a film noir setup, albeit with humans at the center.

No humans reside in the animated world of Zootopia; rather, the animals stand upright, speak, and inhabit their own society like characters from Disney’s Robin Hood (1973). They even wear clothes and consider it immodest not to. There’s a hilarious scene where Hopps and Nick investigate a nudist colony; of course, all the animals are rendered inert in terms of sexual organs, but the animators make great use of nude humor. Elsewhere, the viewer remains astonished by the intricacies of Zootopia itself (though not the degree where Big Hero 6‘s futuristic setting of San Fransokyo outshined the story). Divided into sectors such as “Tundratown” and the “Rainforest District”, the city is alive with diversity. One of the most photo-real sectors belongs to the rodent world, which is miniature even to Hopps when she chases a perp inside its tiny walls.

Of course, diversity itself remains the subtext of Zootopia‘s proceedings, disguised as a detective yarn though they may be. The relationship between Hopps and Nick is strained more than once, given her regrettable lifelong prejudice against foxes, while others who judged Nick’s given species (a heartrending flashback depicts the origins of Nick’s crushed hope for equality) shaped his entire petty criminal lifestyle. Despite all the commentary, the film could hardly be called preachy. The conspiracy story is always the driving force, whereas prejudice is the subtext. Indeed, the filmmakers make light of the material with jokes that were clearly designed for adults in the audience. Hopps quips about how she’s naturally good at math, “Rabbits were born to multiply.” Later, she corrects someone for calling her “cute”—other bunnies can refer to her as “cute”, but it’s wrong for another species to use that word.

Suffice it to say, Zootopia is Disney’s most politically correct, knowing film. Too many of their animated features have been spoiled in subsequent years after looking back at the racial stereotypes therein, from the depiction of Native Americans in Peter Pan (1953) to Arabs in Aladdin (1992). This film creates a world that is fascinatingly ornamented and incredibly smart, where surprisingly deep characters survey the multifaceted animal metropolis. The characters talk fast (except at the sloth-operated DMV, easily the film’s best joke), their wit is sharp, and the visual gags are aplenty. Thankfully, the film also contains no shortage of heart or imagination. Michael Giacchino’s pulpy jazz score lends to the genre stylizations, while the story is captivating enough to have children and adults alike wondering what will happen next, and perhaps, bring a tear to their eye. With equal measures of animated beauty and socially responsible intelligence, Zootopia stands among Disney’s very best.