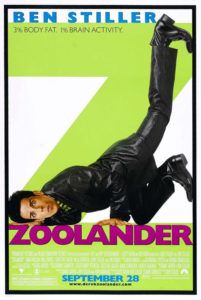 Trying to determine if you actually enjoyed Ben Stiller’s Zoolander? Here’s a tip: Ask yourself if you’re a Brint or a Meekus. Allow me to explain. There’s a scene in the 2001 comedy where two of Zoolander’s male model roommates poke fun at his competition, a hipster model named Hansel. “Ex-squeeze me, but have you ever heard of styling gel?” says Meekus, played by a young Alexander Skarsgård. Brint, played by Alexander Manning, replies defensively, “I’m sure Hansel’s heard of styling gel. He’s a male model.” Meekus counters, “Uh, Earth to Brint, I was making a joke.” Brint answers, “Uh, Earth to Meekus. Duh, okay. I knew that!” Meekus comes down hard, “Uh, Earth to Brint, I’m not so sure you did, ‘cuz you were all ‘Well I’m sure he’s heard of styling gel’ like you didn’t know it was a joke!” Wounded, Brint responds, “I knew it was a joke, Meekus. I just didn’t get it right away.” Later, they all go out for an Orange Mocha Frappuccino and burn to death.

So are you a Brint or a Meekus? Did you appreciate the humor of Zoolander upon first viewing, like a Meekus? Or like a Brint, did it finally make sense years later, or even bypass you completely? If you’re a Meekus, you probably enjoy the film very much. If you’re a Brint, don’t feel bad, a lot of people are. Mark Caro of the Chicago Tribune wrote the film “exceeds the time span over which watching people acting dumb and making funny faces remains funny.” Roger Ebert seemed to take issue with the film’s politics and unfavorable representation of Malaysia, specifically the assassination attempt against their Prime Minister in the wake of the 9/11 attacks. (In retrospect, there’s little connection between the two events, but emotions were high in the fall of 2001, so who can blame him?) Favorable reviews were lukewarm, with mild praises sprinkled about words like “trivial” and “superficial”. But isn’t that what modeling is all about?

At any rate, those who rightly praised Zoolander for parodying such an absurd industry, and what’s more focusing on male models instead of the mountainous clichés associated with female models, remain few. Stiller’s one-note satire of the often ridiculous fashion industry contains plenty of insider jabs lost on viewers unfamiliar with high fashion (I include myself in that group). Its comic style avoids the customary scatological jokes embraced by most comedies (although, sex is prevalent; there’s one unnecessary scene with a curiously shifty erection). Instead, the film invents its own brand of mockery by poking fun at the vanity paraded about in the fashion world as artistic beauty. Further, it acknowledges the cruel conditions under which many of the top designers produce their clothes. But that’s not to suggest you should mistake Zoolander for having a deep-rooted social commentary.

Originally created by Stiller and writer-producer Drake Sather for a series of short films that aired during VH1 Fashion Awards in the mid-1990s, Derek Zoolander is an exceedingly stupid male model. As the tagline says, “3% Body Fat. 1% Brain Activity.” What’s even more amusing is that Stiller himself is not a classically attractive man, being short and sort of funny looking. Yet, he’s playing a character everyone onscreen, many of them involved in the fashion industry, ironically acknowledges as a beautiful physical specimen, albeit old for a male model (Stiller was 35 while filming). This single joke that models are moronic—even bulimic—wears thin over the course of a mere 89-minute runtime. But Stiller’s cast of cartoonishly over-the-top characters always entertains, particularly his costars Owen Wilson and Will Ferrell.

Somehow, Zoolander is also a brainwashing thriller not unlike The Manchurian Candidate, except set within the fashion industry. Amid the E! network interviews and random cameos from countless good-looking celebrities (David Bowie, Natalie Portman, Gwen Stefani, Billy Zane, James Marsden, Tom Ford, Victoria Beckham, Heidi Klum, Claudia Schiffer, Winona Ryder, and Garry Shandling), something sinister is afoot. Threatened by the Prime Minister of Malaysia’s decree to increase wages for (but not stop) child labor, fashion industry leaders hire malevolent designer Mugatu (Ferrell) to find a model that can be quickly brainwashed and programmed to kill the Malaysian leader. Enter Zoolander, a three-time Male Model of the Year and a fashion icon with his various trademarked pout looks—all identical, but not. When Zoolander loses his coveted prize to Hansel (Wilson), who’s “so hot right now”, the model begins to believe life is about more than being “really, really ridiculously good-looking”.

Fortunately, Stiller doesn’t fully saturate his audience in this surreal fashion world. Christine Taylor (Stiller’s wife) plays Matilda, a Time magazine journalist, and the only main character with an IQ above 80—she’s the audience’s straight man entry point to the fashion world, and it’s often her eye-rolls at Zoolander’s stupidity that make certain scenes tolerable. Matilda puts forth most of the effort to wrangle the sworn enemies Zoolander and Hansel to join forces and stop the assassination attempt, and expose a history of male-models-turned-assassins. Without her, the whole film would be about Zoolander finally overcoming his inability to turn left. (In addition to his wife, Stiller’s dad Jerry appears as the founder of Zoolander’s modeling agency, Balls Models. Look for his mom and sister in brief appearances too.) Then again, neither Zoolander’s arc nor the assassination scheme would be enough on their own.

Wild brainwashing videos with Ferrell’s hysterically weird faces incite belly laughs, while often clever gags about Zoolander’s stupidity amuse. The plot is thin, the short runtime padded with montages and comic asides, but many of those asides are the best parts of Zoolander. When the protagonist’s roommates try to cheer him up early on with an “Orange Mocha Frappuccino”, the sequence, set to Wham!’s “Wake Me Up Before You Go-Go”, proceeds as Zoolander and his model friends perform for a camera that isn’t there. Soon they’re splashing each other at a gas station with windshield cleaner, and then gasoline. One of them lights a cigarette and—BOOM! Through the nonsensical humor, the production is actually top notch, especially the work by costume designer David C. Robinson. His ostentatious outfits for Mugatu and his henchwoman Katinka (Milla Jovovich) combine the most eccentric fashion touches with James Bond villainy.

Although Stiller is perhaps best known for his neurotic, Woody Allen-esque characters from Flirting with Disaster and Meet the Parents, with Zoolander he harkens back to the parodying goofiness of his earliest video shorts—such as his bowling spoof on The Color of Money that earned him a brief spot on Saturday Night Live, and later his own sketch comedy show. Having made more than a dozen films together, Stiller and Wilson are at their prime here, whereas Ferrell’s outlandish villainy steals several scenes from them both. Zoolander may prevail on a singular joke that male models are dumb, but it’s a funny joke, actually, and Stiller finds countless ways to remind us just how dumb they are. There’s an old saying about actors, how one needs to be smart to effectively pretend to be stupid. If that’s true, Ben Stiller is a very smart man.