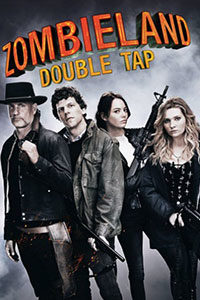 Zombieland: Double Tap is smart enough to know the odds are against it. As the first sequel to the 2009 original, it has taken a decade to reach theaters. The movie will doubtless suffer the same fate as other long-delayed sequels such as last year’s Incredibles 2, which was preceded by such an extensive period of waiting that audiences may have given up hope of ever seeing it. By the time it arrived, many felt disappointed or underwhelmed. Expectations had risen to outrageous extremes, making it impossible to achieve the anticipated greatness that in the interim fans had believed inevitable. But just like Incredibles 2, the follow-up to Zombieland is a worthy sequel whose only major problem is that it took too long to get into theaters. That’s hardly something to blame on the movie, a delightful retread of the comic dynamism and undead peril that defined the original. The full cast has returned (all four of them), and everyone appears quite happy to be back into character. The material even feels refreshing, despite coming out in the wake of countless zombie movies and television shows in the last decade.

Though the rise and subsequent decline of AMC’s The Walking Dead could be accused of invalidating the zombie genre in cinemas for the time being, writers Rhett Reese and Paul Wernick (who wrote Deadpool together), along with Dave Callaham, don’t shy away from acknowledging either the passage of time or the ubiquitousness of zombies in pop-culture. “You have a lot of choices when it comes to zombie entertainment,” says Jesse Eisenberg’s Columbus in his omnipresent voiceover. “So, thank you for picking us.” Accordingly, the movie doesn’t attempt to reinvent the formula of the original. Once again, the neurotic and rule-obsessed Columbus is our nebbish guide through the post-apocalyptic wasteland. He’s joined by brutal redneck Tallahassee (Woody Harrellson) and the sisters, the cautious Wichita (Emma Stone) and her now-twentysomething sister Little Rock (Abigail Breslin). Following the events of the 2009 movie, Columbus and Wichita have settled into a domestic romance at the makeshift family’s new dwelling, an Obama-era White House, where the overbearing Tallahassee treats Little Rock like a child.

Whereas the first movie was about finding a family, the sequel acknowledges that families can be oppressive and annoying; even so, running away from them isn’t the answer. Having gone through puberty with no one to share her hormone-riddled teendom, Little Rock yearns for experiences away from the others. Along with her commitment-wary sister, she sets out to start a new life, leaving the guys behind. Meanwhile, Columbus and Tallahassee meet Madison, a dippy young woman who has survived in a mall freezer for years, oblivious to the violence of the zombie-infested world, and becomes Columbus’ rebound. She’s played by Zoey Deutch, who delivers an endless procession of hilarious, airheaded dialogue; it’s a committed performance that somehow manages to be this comedy’s comic relief. But before long, Wichita returns to the fold for an awkward reunion, as she too has been abandoned—after the rebellious Little Rock finds herself a pacifist boyfriend, the patchouli-scented Berkeley (Avan Jogia). While the new couple heads to a rumored survivor’s utopia in Babylon, a no-weapons hippie commune behind a wall, the others follow on the dangerous road to rescue her.

At times, you can see the mechanics of Zombieland: Double Tap in motion, as the characters have been forcibly separated if only to produce a zombie comedy of remarriage. Fortunately, the stops along the way are littered with cameos and funny asides, such as Tallahassee and Columbus’ look-alikes, played by Luke Wilson and Thomas Middleditch. Rosario Dawson makes an appearance as a hardened survivor and Elvis fan, a kindred spirit for Tallahassee. But the material also receives an injection of fresh blood in the form of new zombie types. Columbus informs us that zombies have evolved into new categories. “Homers” are dumb and almost harmless, whereas “Hawkings” can solve basic problems to trap their lunch. The most dangerous are the hard-to-kill “T-800s,” named after Arnold Schwarzenegger’s Terminator; they’re tougher and more intelligent than most. Such inclusions and episodic stops on the journey feel like levels in the movie’s videogame plotting.

After making his debut on Zombieland in 2009, director Ruben Fleischer’s career has been one disappointment after another. From the letdown of The Gangster Squad (2013) to the debacle of Venom (2018), Fleischer hasn’t been able to recreate the energy of his first effort or his earlier music videos until now. Zombieland: Double Tap boasts another slow-motion opening credits sequence and over-the-top “Zombie Kills of the Year”—alongside other visual bells and whistles, mostly achieved through CGI over practical effects this time around—but the appeal of these characters has more to do with the writing and actors. The action is high-energy and occasionally scattershot, apart from one tense close-quarters sequence, and the story has a case of sequelitis. That hardly matters; it’s the playful banter, self-aware humor, and endearing relationships that make this sequel enjoyable. It may not have the novelty of the original, but it’s a pleasure being back in the company of this likable cast and most of the new additions.