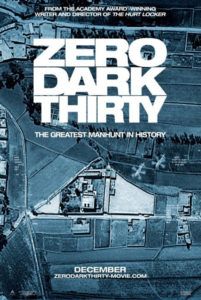 For Zero Dark Thirty, director Kathryn Bigelow and writer Mark Boal reteam after their much-lauded success with The Hurt Locker to detail the hunt for Osama bin Laden with journalistic veracity and cinematic realism. This stripped-down, densely packed picture could be called a docudrama, historical account, just a thriller, or perhaps more accurately all of the above combined into a fascinating mix. Researched to a degree that has brought into question the level of top-secret information the CIA purportedly gave the filmmakers, the picture details the long road from the attack on the Twin Towers on September 11, 2001, to the eventual assault on bin Laden’s compound in Pakistan on May 2, 2011. Since the U.S. government refused to show images of bin Laden’s corpse to the American public, viewers may find a belated sense of catharsis here. But, much like Valkyrie (about the most famous botched attempt to kill Hitler), we know the outcome of Zero Dark Thirty, and that’s a major contributing factor in the inherent lack of suspense. Nevertheless, the Oscar-winning director does a splendid job amping up the audience on multiple frequencies with involving characters and her kinetic style.

With a title referring to half-past midnight, the time of the Al Qaeda leader’s death, the film opens with a minute of black screen against which we hear audio from the victims of bin Laden’s 9/11 attacks. Bigelow uses this emotional wallop to energize the subsequent two-and-a-half-hour CIA procedural, culminating with bin Laden’s inevitable takedown. The two hours preceding the start of the climactic Navy SEAL incursion, however, follow Maya (Jessica Chastain), a young CIA agent who resolutely disagrees with President George W. Bush’s assertion that bin Laden is “hiding in some cave.” Inspired by a real CIA analyst whose identity is protected through Chastain’s fictionalized character, Maya believes the only way to find bin Laden is to ID and track his couriers. To convince others of her minority opinion, she must contend with bureaucratic roadblocks and even survive a few close calls in the field.

Maya’s first appearance onscreen occurs during a jarring sequence where her unsparing colleague, Dan (Jason Clarke), applies excessive torture methods to derive information from a detained Al Qaeda money handler (Reda Kateb). The sequence has spurred all kinds of accusations against the film for its depiction of torture, accusers claiming that the positive outcome of the act suggests the filmmakers meant to justify the extreme means. In this way, Zero Dark Thirty has become a “position” film, even if the matter is nil for Maya. Torture isn’t what leads her to bin Laden, even though many have misinterpreted the film’s message as a pro-torture piece. Quickly, the story moves on, as Maya takes over Dan’s investigation that sends her from one lead to the next over the course of several years. Getting close, she scarcely survives one terrorist attack and later sees a colleague blown away. She grits her teeth and vows to continue no matter what, believing she’s been spared to carry her mission through. Zero Dark Thirty is just as much about Maya’s Ahab-like determination as the perilous hunt for bin Laden itself, which is protracted over nearly a decade.

Bigelow and Boal set the partisan politics aside to concentrate on the CIA’s investigation, but they do explore gender politics, Maya being undervalued by both the SEAL teams and her superiors, seemingly because she’s a woman. Her resolve and singular presence make Maya a force to be reckoned with, as the aforementioned parties discover. She’s sparingly described, without a backstory or scenes of “get to know your protagonist,” and yet Chastain’s screen presence makes her impossible to take your eyes off of. The actress’ breakout year in 2011 (including The Help, The Tree of Life, Take Shelter, and The Debt) has been followed by one supporting role in 2012 (in Lawless), but she’s in full control here, dominating almost every scene, until she takes a step back when the SEAL team takes off for the final mission. In the end, the ultimate victory feels like one made for Maya and her struggle to convince others she’s right, as opposed to some gung-ho act of patriotism.

The technical presentation is superb, although perhaps more utilitarian and, therefore, less expressive than Bigelow’s previous work. Slow motion and other such cinematic devices are absent. Locations in India and Jordan made serviceable stand-ins for volatile Middle East locales. Cinematographer Greig Fraser employs hand-held cameras for most scenes, but the film never drifts off into unintelligible action movie Shaky-cam territory. Even during the pitch-black raid on bin Laden’s compound, Bigelow ensures we clearly understand everything that’s happening. The director alternates between night scenes and green night vision view to keep the raid edgy and exciting, but in terms of action, there’s scarcely anything to compare to the tension found in The Hurt Locker. Despite being described as an action picture in some circles, Zero Dark Thirty takes place more in CIA offices where densely packed expositional debates fuel Maya’s theory, whereas her superiors—CIA Station Chief Joseph Bradley (Kyle Chandler), the CIA Director (James Gandolfini), her storming boss George (Mark Strong)—often want to believe her but don’t.

Most films about 9/11 or the effects thereof have been squashed by mixed praise and poor box-office performance. Zero Dark Thirty will connect with audiences in a way Extremely Loud & Incredibly Close, United 93, and World Trade Center never could. Without resorting to polarizing tactics such as overt theatrics or cold documentary reenactment, it represents a clever balance of emotion and catharsis. In a manipulative but ingenious stroke, Bigelow and Boal channel our feelings through the prism of Maya, and through her, we feel a sense of “we got him” relief. Certainly, there are troubling, if not slyly propagandistic components to such an approach, but they’re applied here with such skill that one must admire the result. Most impressive is how the filmmakers never make the hunt more important than Maya, and Chastain’s ability to balance our emotions, which could have easily spilled over, suggests her performance consists of more than just a woman on a mission. In the end, a decade’s worth of unresolved tension is released in a stirring and relevant motion picture.