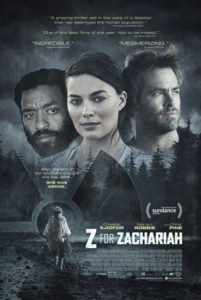 A morality play set in a familiar post-apocalyptic setting, Z for Zachariah doesn’t descend into the usual trappings of ruthless scavengers, bloodthirsty zombies, or other such monstrosities associated with the genre. Instead, director Craig Zobel offers a small-scale mood piece designed to get the audience thinking about its ethical and religious implications. Not unlike Zobel’s previous film, 2015’s Compliance, a disturbing thriller based on Yale psychologist Stanley Milgram’s obedience experiments, he forces the viewer into a what-would-you-do situation intended to spark post-screening conversation. Among everything else that’s yet to be said about Compliance, the film doesn’t tell you how to feel about what happens and doesn’t wrap up the central moral dilemma in a tidy little bow. For that, we can be thankful. Viewers will be less thankful for the lack of dramatic pull or the film’s refusal to take a stance on its central question of the greater force: religion or science?

Margot Robbie (The Wolf of Wall Street) plays Ann, a young, god-fearing, and naive farmer’s daughter who has survived alone in a heavenly valley somewhere in the southern United States. Her valley, beautifully photographed in New Zealand by Tim Orr, somehow remains untouched by the radiation that eradicated the rest of the world. Alone except for her dog, she’s able to grow food and drink fresh water. Believing herself the last person on Earth, she’s overwhelmed to find a scientist from the north named Loomis (Chiwetel Ejiofor), who arrives in a radiation-proof safe-suit and screams for joy when he realizes he’s found a safe haven. Loomis survived in an underground bunker with other scientists like himself, but he wanted more and decided to venture into the unknown. Now sick from radiation, Ann takes him in and nurses him back to health. Before long, he’s putting his scientific brain to work, teaching her how to secure herself gasoline and possibly even get electricity by building a hydroelectric waterwheel.

A man of science but not wanting to offend her beliefs, Loomis doesn’t try to appeal to Ann when she initially refuses to dismantle her father’s church to build the waterwheel, even though it will help them preserve food and keep warm during winter. Meanwhile, a gradual but unconsummated romance builds between them, which, along with much else, is thrown into a tailspin when another survivor arrives on the farm. Caleb (Chris Pine) comes from the same southern region and has similar religious beliefs, and so he’s appealing to Ann. But he’s also clearly trying to drive Ann and Loomis apart. An uneasy, tense love triangle forms, allowing these three actors to play off one another in several indirect scenes of uncomfortable and wanting body language. Of course, it’s quite convenient (and absurd) for everyone involved, including the audience, that Robbie, Ejiofor, and Pine are all good-looking movie stars. The post-apocalypse has rarely been so attractive. Still, the actors deliver solid performances that help us forget this scenario could be someone’s morbid wet dream.

Robert C. O’Brien’s posthumously published 1974 young adult novel followed a much different trajectory, where a 16-year-old version of Ann fends off Loomis’ advances and vies for control over the valley. Screenwriter Nissar Modi kept many elements from the book (the safe-suit, the valley, etc.) and completely reformatted them, then added the Caleb character. Ann is now passed the age of consent. Loomis’ character has been changed from white to black, an underdeveloped issue that arises when Loomis’ jealousy over Caleb begins to show. “You wanna go be two white people,” he tells her. “Then go be two white people.” Of course, there are unavoidable allusions to the Genesis storyline, with the first-man-on-Earth yarn in reverse (Ann has a book called A for Adam, suggesting the last man on Earth would be Zachariah, hence the title). If this is true, then the film offers Ann as an equivalent for a pious Adam. However, figuring out who, between Loomis and Caleb, is the sinful Eve, and who represents the devilish Snake is a bit trickier and perhaps up to the audience to determine.

The intentionally paced measures of Z for Zachariah leave us with many questions, particularly about the ambiguous last scenes. In fact, the climactic moments and final shots exist inside a question mark that leads to larger moral questions. What actually happens and who ends up with Ann is less important that figuring out whether science has spoiled paradise or religion has slowed the progress of mankind. And yet, it’s odd that the scientific question of repopulating the Earth never comes into play. Two individuals with limited genetic material probably shouldn’t be left to try (there’s more than one reason for laws against incest); in this situation, however awkward, a polygamous threesome would be the best bet for survival. But this isn’t a film about exploring how humanity survives after a bottleneck event. It’s a somewhat aloof allegory that, though visually appealing and serving a trio of fine, understated performances, never fully immerses us in the drama.