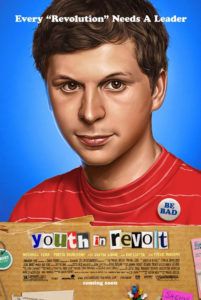 Michael Cera has been typecast as the nerdy-but-nice teen in a hoodie, forever destined to play an awkward teenager, and no doubt he’ll embody that same role well into his twenties. Though he doesn’t appear in a hoodie in Youth in Revolt, he’s not acting beyond anything we’ve already seen before, despite his opportunity to play dual roles. Based on the book series by C.D. Payne, the film features Cera in his usual wittily sarcastic yet timid onscreen persona, but he also plays a bad-boy alternate ego that for some will show the actor in a new light.

Nick Twisp (Cera) has a name that doesn’t exactly exude masculine prowess. Indeed, this 16-year-old boy spends his time reading classical literature and watching foreign movies. As a result, he talks with a farcically haughty rhetoric and overdramatizes everything, particularly his quest to lose his virginity. It doesn’t help when he tries to pick up girls at the video store by asking if they’ve seen Fellini’s La Strada. His mother (Jean Smart) and her slob-trucker boyfriend (Zach Galifianakis) take him along on vacation to a Bible-hungry trailer park, where he meets Sheeni Saunders (Portia Doubleday). It’s love at first sight—she’s beautiful, well-versed in international cinema, and hyper-sexual. But she’s also elusive, forcing him to prove himself to her.

On his own, Nick doesn’t have the gall to be the bad-boy he thinks Sheeni wants him to be. So he splits his ego and creates François Dillinger, who is simply Michael Cera with blue eyes, a pencil moustache, and an ever-lit cigarette in his hand. François says and does those things that Nick only wishes he could, but he’s presented as a separate person, rather than a piece of Nick’s already existing personality. François’ moments are the best in the film and will send you rolling in the aisles, his directness being an absolute change of pace for the traditionally meek characters played by Cera. And while his deadpan performance as François is different for the actor, it’s also just a supporting role. (Note: In Payne’s books, Nick has another alter-ego named Carlotta, and the way she’s introduced in the movie is less as another personality, but a costume to avoid detection.)

Director Miguel Arteta works from a screenplay by Gustin Nash, who also wrote the teen rebellion comedy Charlie Bartlett. That film had the benefit of the diverse Anton Yelchin to provide for it, whereas Cera’s presence feels redundant at this point. Arteta also pointlessly incorporates animations, both cartoon and stop-motion, simply to mix things up a bit. They do more to make the movie uneven than they do to enhance it. There’s also a distracting amount of wacky characters: Steve Buscemi plays Nick’s dad, whose girlfriend is only a few years older than Nick; Fred Willard is the activist neighbor who hides illegal immigrants in his basement; Ray Liotta is the new beau for Nick’s mom, making for an awkward meal or two; Sheeni’s stoner brother (Justin Long) decides to feed his whole family “magic mushrooms” as an appetizer to their Thanksgiving feast. After a while, you’ll begin craving someone “normal”.

In the end, Youth in Revolt is just another teenage rom-com about the desire to find an outlet for adolescent hormones (i.e. get laid). But because Arteta tries to liven up the experience with animation and absurdist behavior and split personalities, we’re supposed to forget that Cera has made this movie before (see Nick and Norah’s Infinite Playlist, Superbad, and Year One). How many times will we have to endure Cera chasing the girl and trying to lose his virginity? Ultimately, the result feels forcibly quirky, if occasionally hilarious, and might be worth your time depending on your fondness for the movie’s star.