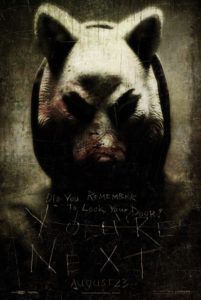 Four siblings and their significant others get together at their parents’ country house to celebrate their 35th anniversary. Passive-aggressive brother Drake (Joe Swanberg) tells his sister’s “underground documentary filmmaker” boyfriend (Ti West) that instead of making arthouse films, he should make commercials for television. “They’re short, and they really zap the audience,” Drake explains enthusiastically, deliberately goading his sister’s takes-himself-too-serious beau. If you’re at all familiar with film festival micro-dramas or the indie horror movement in the last five years, you know there’s an irony behind the notoriously minimalist Swanberg and West having this conversation in You’re Next, a brutal yet rewarding home invasion thriller that sticks close to conventions but does it extremely well. An art film in disguise, it’s an entirely commercial exercise enriched with the low-budget charm and characters of an arthouse piece.

Along with their director Adam Wingard, Swanberg and West have contributed both to indie horror (see V/H/S or The House of the Devil) and the mumblecore movement, resulting in an offshoot called “mumblegore,” a sub-subgenre in which you might also include Baghead (2008) and The Innkeepers (2011). However, You’re Next doesn’t qualify; this is standard genre stuff ornamented by an ensemble cast and Wingard’s naturalist, handheld camera. So when Swanberg and West begin to argue about the merits of TV commercials vs. black-and-white docs, the audience should recognize the self-aware quality of what’s about to begin. Shortly after their little debate is over, West’s character stands up from the dinner table because he sees something outside. Drake, meanwhile, has shifted his passive aggression onto his professor brother, Crispian (AJ Bowen, from The Signal). Suddenly, an arrow penetrates the dining room window and lands itself on West’s forehead. And Drake wins the argument.

Men wearing white animal masks and black getups, armed with crossbows, machetes, and axes, raid the house from inside and out, killing the houseguests one by one. Moneyed parents Paul (Rob Moran) and Aubrey (Barbara Crampton) wilt into emotional puddles as the body count of loved ones quickly increases. Shallow Drake and his snobby wife Kelly (Margaret Laney) are rendered useless in the trying situation. Princess-daughter Aimee (Amy Seimetz) isn’t so spritely after her boyfriend’s arrow-in-the-brain. And the youngest brother Felix (Nicholas Tucci) seems just as rebellious, stand-offish, and dim as his misanthropic girlfriend Zee (Wendy Glenn). Mix these characters together with some death, and they’re at each others’ throats, bickering over what to do now.  But it’s Crispin’s former student turned girlfriend, the Aussie survivalist Erin (Sharni Vinson), who takes control of the situation and fights back, making none of the horror movie mistakes usually made in such films.

Setting the film apart is its pleasant blend of fast-paced yet never unnatural tonal shifts, which, along with its wit and genuine shocks throughout, are the base of the film’s uniqueness. Screenwriter Simon Barrett engages in hilarious brotherly bullying in one scene and then takes us into sheer morbidity in another. One sequence features a near-sex scene on the bed next to a dead family member, sparking groans and Is this really going to happen?-type remarks from the viewing audience. Gradually, the terror gives way to suspense as Erin becomes a heroine, complete with 1980s-brand synth music set to her own Home Alone-like preparation for war montage. The way her character holds down the fort with tools and kitchen utensils goes from purely shocking to downright cheerworthy. The film even boasts an effective twist or two, just enough to keep the audience on their toes as they tally the bodies and cover their eyes at the film’s considerable amount of gore, especially near the end. Throughout, the audience begins to feel that Wingard and his crew have designed this film to play for larger audiences, going against their arthouse roots and, in the process, proving Drake’s unfortunate argument to be true. And yet, it’s ironic, because though You’re Next may not be an indie feature of considerable artistic integrity, its appeal, despite its commercialism, is far more accomplished than, say, any of Swanberg’s endless string of vapid, talky dramas.

In the hands of Wingard and his indie-inflected cast and crew, tired commercial formulas become effective again.  You’re Next debuted at the 2011 Toronto Film Festival, where Lionsgate picked up the American film rights. For whatever reason, it took nearly two years to finally distribute the film in theaters. And, unlike most of Wingard, Swanberg, and West’s releases, this one isn’t debuting on VOD or finding its audience on Netflix streaming. Deservedly, You’re Next arrives in wide release at the end of summer, when scores of moviegoers will surely eat this stuff up at late-night screenings. Much like this year’s The Conjuring, the film is familiar, but the formulas have been controlled in such a confident, enjoyable manner that we cannot help but admire how well Wingard has recycled old ideas to come up with something so gratifying, chilling, and downright fun. And, since it’s far more satisfying and self-conscious than the ugliness which brought about The Purge—another 2013 home invasion scenario—the material is a welcomed change from the dull, commercial-minded yarns such material would normally produce.