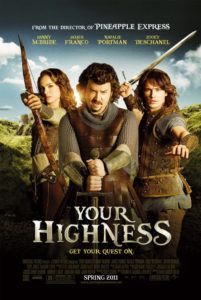 If unrelenting penis and ejaculation jokes are your thing, Your Highness will feel like a warm blanket. Never before has there been a movie so dedicated to making this amount of juvenile gags about male genitalia and fellatio. But don’t forget about weed humor and gratuitous naked women—there’s plenty of those too. Writers Danny McBride and Ben Best team with indie filmmaker David Gordon Green, who has unfortunately stopped making weighty dramas like Snow Angels and Undertow for more mainstream fare like The Pineapple Express. And while that film was a pleasant change of scenery and display of the director’s versatility, this latest, bafflingly unfunny effort suggests his diversion into comedy territory has already run its course.

In concept, the filmmakers had something that sounded clever: a straightforward sword and sorcery epic inspired by the likes of Excalibur and Clash of the Titans, but then hijacked and deconstructed by the basest version of McBride’s usual vile blowhard comic persona. Imagine Cheech & Chong at a Renaissance Fair and you get the idea. Here, brave Prince Fabious (James Franco) must save his bride, Belladonna (Zooey Deschanel), from the evil warlock Leezar (Justin Theroux), and his idiotic, dope and sex-obsessed brother Thaddeus (McBride) is forced to go along for inane reasons which I suspect even the writers couldn’t explain. On their voyage, the heroes face all sorts of fantastical creatures—a sexual predator wizard, a Minotaur, a tubby warlord, a five-headed serpent—and meet their match with a fellow warrior, the archer Isabel (Natalie Portman), who eventually joins their quest to stop Leezar.

However charming the setup sounds, the outcome is appallingly bad by the opening credits, and from there it only worsens, easily earning the movie a place among the worst of 2011. The aforementioned group of talent (McBride, Best, Green) all attended the North Carolina School of the Arts together, along with the film’s cinematographer Tim Orr. And their resulting movie feels like these good friends sat around and wrote down every little comedic bit that popped into their no doubt stoned brains. This approach may have worked for pals Seth Rogen and Evan Goldberg while writing Superbad and The Pineapple Express, but it fails here. After their initial evening of baked brainstorming, there apparently weren’t any clear-headed story conferences to determine if the jokes would work on anyone outside their circle of friends. The audience feels like we’re standing outside the window of the neighborhood pot party, looking in at attendees enjoying themselves, wishing we understood what everyone thought was so funny.

The movie reeks of moments where the humor falls flat and the audience remains catastrophically silent. Aside from one or two chuckles, there’s not one laugh-out-loud moment. The plot leads its characters into absurd situations, every sophomoric scene punctuated by an F-word or penis joke. The onslaught of crude humor is only relieved by bloody violence and incoherent swordfights, which are no more involving than the movie’s overall storybook plot about a two-moon prophesy and a virginal damsel’s rescue. Watching this thing unfold, a viewer can do little more than look on with aghast awe and wonder what went wrong. How could so many talented people working together produce such a humiliating dud? How could every joke manage to be so unfunny?

With aspirations of being today’s Monty Python and the Holy Grail, Green’s movie miscalculates its ratio of medieval period adventure and R-rated content, giving far too much time to the latter. A few grotesque jokes and swears contained inside a larger fantasy spoof may have been more forgiving than the blitz of puerile crudeness that takes places. It’s really quite a shame because production values are high, the scenery is gorgeous, and the special FX look nice. A number of talented people got involved; in addition to those mentioned, Toby Jones, Damian Lewis, and Charles Dance have small roles. There’s just no story or script, and the level of stupidity is off the charts. How many different ways can you say a movie is bad? Your Highness is the test. More than just disappointing, this movie is painful and a chore to follow to the end.