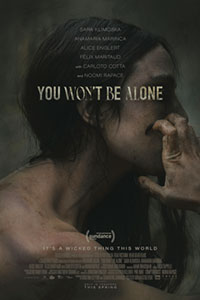 You Won’t Be Alone, a stunning and sublime debut from writer-director Goran Stolevski, plays like a humanist horror story derived from the folklorish inspiration of Robert Eggers and the existential searching of Terrence Malick. Set across farmland and forests in nineteenth-century Macedonia, Stolevski’s grim fairy tale is set into motion by Old Maid Maria (Anamaria Marinca), also known as the “Wolf-Eateress,” a callous witch bitter at the world because of her own experiences with marriage, parenthood, and trauma. In the first scenes, a desperate mother pleads for the witch to spare her newborn, making a pact that Maria can return when the child is 16-years-old to claim her as a companion. “You won’t be alone in your old age,” the mother promises. When the time comes, the child, Nevena (Sara Klimoska), made mute by the witch, has been raised in a cave, always alone, incapable of speaking intelligible sentences even in her head, with nothing but a pile of leaves to keep her warm. Maria takes her as an apprentice to a dark existence of blood drinking, shapeshifting, and keeping away from the small communities that will burn suspected witches.

What begins as a descent into a hellish lifestyle of predatory wandering develops into a narrative about Nevena’s self-discovery by inhabiting other bodies, leaving You Won’t Be Alone quite unclassifiable. Maria, who appears in scar-tissue flesh from top to bottom, turns Nevena into a witch with a scratch and “witch’s spit,” dooming her to blood lust (especially for infants), long black claws, and apparent immortality. But the Australian-Macedonian Stolevski finds empathy for even the vilest characters, crafting an unlikely coming-of-age story centered on a girl whose true voice comes through only in voiceover—like lyrical readings from a Malick film, only composed of an invented grammar and syntax that reflect Nevena’s isolated upbringing. “Speak them to me. Them voices,” she says, haunting the images onscreen. Stolevski doesn’t expound on Nevena’s new abilities or how the world speaks to her in mysterious ways. But after observing Maria and later following Nevena on her journey through several identity shifts, the strange mythology behind the film becomes clearer.

You Won’t Be Alone is a quiet and meditative film, especially after Nevena and Maria break ties, and the voiceless girl must wander the countryside alone. Initially, much of Nevena’s experience amounts to overstimulation from the outside world. She has never been exposed to Nature, and she proves distracted by everyday details that are new to her. Eventually, she learns to shape-shift as Maria does, and when she kills a villager (Noomi Rapace) accidentally, she takes her identity. Nevena proceeds to open a cavity in her chest and stuff herself with her victim’s organs. Now she looks like Rapace and experiences the world from a farmwife’s subjectivity. She does this several times throughout the film, taking the form of a dog, a young man, and a young girl. However, inside each identity, she experiences an entirely new way of looking at the world, complete with agency or lack thereof, and different physical sensations. Mark Bradshaw’s resonant score instills a sense of discovery in these scenes, which focuses on Nevena’s immediate and experiential odyssey. 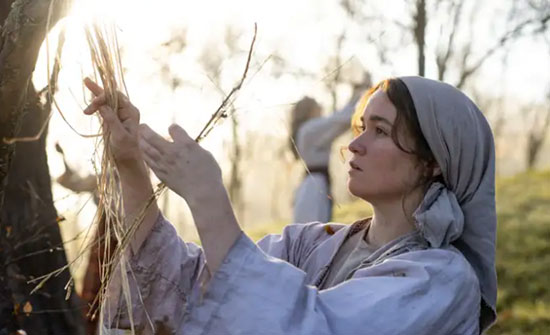 Stolevski’s aesthetic choices, combined with the austerity of Nevena’s fractured inner dialogue, make for a film that takes some time to find its groove. But after a half-hour, the viewer settles into You Won’t Be Alone’s familiar usage of the boxlike Academy Ratio, a standard tool of many arthouse films these days, conveying limited space and perspective or a period in the distant past. All apply here. Cinematographer Matthew Chuang shoots in muted earth tones and, along with editor Luca Cappelli, creates an impressionist vision of Nevena’s journey through subjectivity and time. The sound design makes every narrated word seem whispered too closely into our ear—although the broken, almost poetic verse becomes strangely hypnotic. From gushy sounds of flesh tearing to bones crunching during transformations, the aural effects send more shivers up the spine than the film’s copious gore. And yet, though occasionally jarring in its depiction of violence or disembowelment, the film doesn’t register as a conventional horror movie interested in scaring its audience. It’s bound to be classified as “elevated.”

Rather than abject terror, You Won’t Be Alone’s eventual theme lies in Stolevski’s willingness to use the gory metaphor of Nevena’s transitions to spin a yarn about self-actualization, particularly among women. When robbed of youth by her mother, Nevena was later forced into a self-education; she often behaves in unsocialized ways that villagers interpret as mental sickness, idiocy, or possession. While in the flesh of Rapace’s farm woman, she learns about patriarchal conditions under a husband, in which her place is “inside his palm.” As Boris (Carloto Cotta), a twentysomething farmhand, she learns what tenderness and pleasure a man experiences and can bring to a woman. Finally, as the child Biliana (first Anastasija Karanovich, then Alice Englert as an adult), Nevena re-experiences her lost youth, education, socialization, and young womanhood with the new information she has experienced firsthand in other hosts. It’s stunning how the film’s evocative, discordant, sometimes irregular structure ultimately has a curious harmony through these perspectives, resulting in Nevena’s well-rounded outlook.

If the scenario sounds vaguely similar to Under the Skin (2013), albeit replacing an alien with a witch, that’s true enough. Yet, the film is no less tender or singularly made for its clear thematic and stylistic antecedents. By the end, Stolevski’s vision becomes achingly intimate and deeply felt during a flashback that details Old Maid Maria’s origin, humanizing why she “rages with envy” and turning her into a tragic, unsavable figure. While the entire cast of Nevenas manages to convey a single identity that grows throughout the film into a cohesive group performance, Marinca evokes lifetimes of pain from beneath her convincing burnt flesh prosthetics (which vaguely resemble mid-stage Brundlefly). After premiering at the 2022 Sundance Film Festival, where Focus Features acquired Stolevski’s debut for distribution, You Won’t Be Alone marks an impressive debut and leaves one intrigued to discover what he does next. For all its grotesque content, it also happens to be quite beautiful and even life-affirming in its sensitivity toward the lives of others.