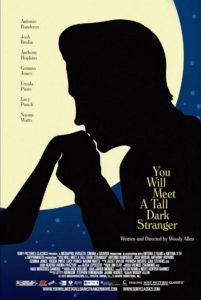 In a vague sort of way, Woody Allen’s You Will Meet a Tall Dark Stranger considers the overreaching theme of mystical forces—precognition, reincarnation, extrasensory perception, even occultism—serving as self-imposed wish-fulfillment. A few characters within this drama (billed as a comedy) make a conscious, fear-based choice to believe in these forces, whereas others write off such events as hokum. When a psychic makes a prophecy that has a fifty percent probably of coming true, and it comes to pass, does this mean the psychic’s powers are valid, or the individual is good at playing the odds? The film explores both possibilities, while also disclosing the psychic is an admitted fraud.

You see, unless used as a storytelling device, Allen doesn’t much believe in whimsical concepts like fate or divine intervention, just ironic coincidence. Everyone wants the crystal ball to tell them the proverbial “tall dark stranger” waits in their future, but for Allen, that’s an absurd notion. The ongoing theme throughout many of his works is the pointlessness of human existence, how funny or sad it is the way things work out for no reason, and finally, that life has no larger meaning than our earthly pursuits. While it’s difficult for this critic to argue with such a notion, in Allen’s hands this recurring message makes for detached cinema, in part because, by and large, his stories revolve around lovesick characters looking for answers. And this being the 75-year-old Allen’s fortieth film, his career-long themes have lost much of their edge, while his choice of actors and talent for writing witty dialogue are sharp as ever.

In a familiar setup, an anonymous narrator, maybe the same one from Vicki Cristina Barcelona, recounts the marital troubles of a group of friends and family in London, Allen’s periodic cinematic home since Match Point in 2005. Tearful Helena Shepridge (Gemma Jones) takes her woes to bogus psychic Cristal Delgiorno (Pauline Collins), hoping for news of good fortune after being deserted by Alfie (Anthony Hopkins), her former husband, who has since moved on to a pathetic life of wooing a prostitute, Charmaine (Lucy Punch). Helena urgently latches onto Cristal’s every word and reports the scammer’s ever-cheerful predictions to her daughter, Sally (Naomi Watts), and her skeptical son-in-law, Roy (Josh Brolin). Helena is told she will find new love, and Sally encourages her to believe as much, since it makes her so happy. Meanwhile, Sally and Roy have their own problems, such as having to borrow money from Helena to pay the bills. The melancholy Roy, who can’t keep a job, waits with impatience for news from the publisher about his newly completed book; as he waits, a pretty young woman (Freida Pinto) across the way draws his gaze. And Sally finds herself more and more attracted to her charming art gallery boss (Antonio Banderas), and less interested in Roy’s continuing malaise.

What a bittersweet thing it must be to live in Woody Allen’s filmic world, where privileged classes have nothing better to do except wax intellectual and pursue their complicated romantic affairs. And when they’re not busy with that, they’re complaining about their impressive profession or embracing art and literature.His characters search for love and eventually happiness in unusual places, analyzing their romantic woes to find the purpose of it all. And while Allen’s more romantic (Manhattan) or genre exploring (Everyone Says I Love You) films frequently touch a powerful chord, his ability to write believable characters has waned over the years. This film demonstrates as much by delivering an entire cast of characters who feel artificial, even though they’re written with Allen’s enduring confidence.

Certain though Allen’s production may be—with impressive cinematography on London’s streets by Vilmos Zsigmond, who also shot Allen’s clever thriller Cassandra’s Dream—the storytelling feels less passionate than his followers may be accustomed to. On the whole, the film compares to one of Allen’s works from his ugly downturn in the early 2000s—the era of forgettable dribble like Anything Else, The Curse of the Jade Scorpion, Hollywood Ending, and Small Time Crooks. With no memorable laugh-out-loud moments, viewers may watch with a slight smile, until a scene where Sally repeatedly, and harshly, calls Helena an “imbecile” for believing in whatever makes her happy. The off-putting nature of that scene reminds us how tonally confusing this film proves to be. At any rate, with Allen still producing one-film-per-year, it probably won’t be long before he makes up for his missteps in this release.