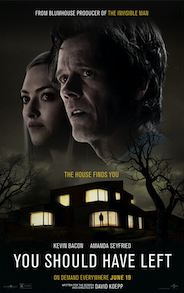 The haunted house in You Should Have Left is more compelling than the story, more spine-tingling than the film’s eerie atmosphere or various twists. It’s a massive, modernist vacation home nestled a few miles away from a small village in Wales. Like one of Frank Lloyd Wright’s many designs that cut into the Wisconsin countryside, it peeks out from the Earth with its massive windows and severe angles. Locals say it’s not a typical construction; rather, a labyrinth of “houses atop houses.” The pale brick interior and its neutral color palate look welcoming and cozy, like a Swedish chateau, except for the noticeable lack of anything on the walls—only the empty hooks on which pictures and artwork used to hang. Inside, long hallways with countless doors lead to more hallways and more doors. At one point, the film’s star, Kevin Bacon, follows a breadcrumb trail of lights in the dark and finds rooms he never imagined could be there. Stranger still is what happens when Bacon’s character attempts to measure the length of rooms and test its right angles. Nothing about the house makes sense in reality.

Writer-director David Koepp knows that location is crucial to a good haunted house story. Yet his screenplay, based on the 2017 book by German author Daniel Kehlmann, doesn’t skimp on well-drawn characters. Much like Stanley Kubrick’s The Shining (1980), the characters arrive at the haunted house because they are fated to do so; thus, they must be convincing personalities. Bacon plays Theo, a sixtysomething former banker with a murderous scandal in his past. He’s married to the much younger Susanna (Amanda Seyfried), a famous actress, in a May-December romance that isn’t merely a product of Hollywood tradition but an active text in the film. Together, they take their six-year-old daughter, Ella (Avery Essex), to the Welsh home to escape before Susanna must return to work. Much like Kubrick’s film, the seemingly happy couple and their child are confronted by the house’s dark secret, compelled mainly by the father’s troubling past. It’s prime fare for Blumhouse Productions, makers of similar material including the Paranormal Activity and Insidious franchises.

Koepp has been following the Blumhouse formula since before Jason Blum founded his production company. Go back and watch Stir of Echoes from 1999, and you’ll find a supernatural thriller worthy of the Blumhouse label. That film bears much in common with You Should Have Left. Both feature Bacon as a wiry, fixated guy whose unconscious mind leads him to something sinister and paranormal. Both films rely heavily on dream sequences and unshakably powerful imagery. They also remind us what an underrated performer Bacon is, and how his presence can often elevate an underwhelming presentation. Granted, Stir of Echoes is a much better film than the latest Koepp-Bacon collaboration, but You Should Have Left has just enough memorable moments and imagery to recommend for horror enthusiasts. Cinematographer Angus Hudson uses light and shadow in occasionally incredible ways—the scene where Bacon runs up a staircase illuminated by a single, dangling bulb, creating all sorts of creepy, moving shadows through the railings, remains fixed in my mind.

And yet, its most enjoyable scenes do not involve the house, nor even the nightmare sequences that transpire in this M.C. Escher interior. Instead, they involve the family dynamic. Theo is insecure about their age difference, leading to some jealous behavior and invasions of privacy. Susanna is suspicious too, although her thoughts involve Theo’s scribbling in his journal—part of a therapy that helps him process trauma. Later, his history becomes an issue when his daughter asks, “Why do people hate Daddy so much?” These little clues and peculiarities drive the story, but they’re more entertaining for how they define the characters. The same is true of another Blumhouse-appropriate Koepp film: Secret Window from 2004—an adaptation of a Stephen King novella about a writer with a fractured identity. But the facets of the protagonist’s mind were far less interesting than Johnny Depp’s quirky performance. Similarly, there’s a distinct joy in watching these three performers interact. Essex, playing an observant little girl who knows enough to recognize that the getaway her parents have chosen is bad news, offers a wealth of personality in her small role.

With a title that sounds like something an audience yells at the screen, You Should Have Left is decidedly light on scares. A few unsettling moments in the house’s damp, metallic basement cause our hair to stand on end, but in the last ten minutes, editor Derek Ambrosi relies on some dull transitional flashes to white that seem beneath the otherwise slick and confident filmmaking throughout. Moreover, the explanation about what’s going on, and the third act’s sheer volume of reveals, fall mostly flat. There’s also an undercooked time element here that fails to resolve itself in any satisfying way. But Bacon, Seyfried, and Essex keep the film engrossing with their lived-in performances, and the (non-para)normal interactions between them prove impactful. There’s a confession near the end of You Should Have Left, and Seyfried’s stark reaction is the most confronting thing in a story filled with drowned ghosts, a dark specter with a limp, and a demonic house.