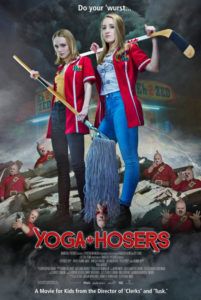 Kevin Smith and Johnny Depp are proud parents. So proud, in fact, they gave their teenage offspring small roles in Smith’s last movie, Tusk (2013), a Canadian horror-comedy that costarred Depp as a wacky detective. Their girls did fine, but the proud fathers saw genius and resolved to produce an entire feature around them—another pseudo-horror-comedy set in Canada, entitled Yoga Hosers. Propelled by a degree of admiration only a father could have, the movie provides a showcase for the teenage girls to demonstrate their joy of singing, knack for comedy, and, I suppose, yoga. But rather than inspire the writer-director to elevate his game for the sake of familial pride, Smith delivers the worst effort in his career, largely because of the movie’s other driving force: his callow desire to proclaim his hatred for critics onscreen.

We first meet the titular same-named clerks, Colleen C. (Lily-Rose Depp) and Colleen M. (Harley Quinn Smith), rehearsing their girl band in the back of the Eh-2-Zed convenience store, alongside their 35-year-old drummer Ichabod (Adam Brody). When these Winnipeg sophomores aren’t rehearsing, they’re dismissing everything as “basic” and texting away on their smartphones—in other words, occupying Smith’s over-exaggerated categorization of modern teenage girls. The Colleens also spend much of their time at a strip-mall yoga studio operated by Yogi Bayer (Justin Long), who keeps getting calls from Warner Bros. about his business name having similarities to a certain Hanna-Barbera cartoon. (This is about as funny as Yoga Hosers gets.) They also have curiously open relationships with their respective single parents (Tony Hale, Jennifer Schwalbach Smith).

Much of Smith’s humor revolves around typical Canada jokes. Everyone says “eh” and “aboot”, and they eat Pucky Charms because, you know, hockey. Johnny Depp returns as oddball Montréal detective Guy Lapointe, who’s somewhere between Columbo and Kolchak, and performed under a mound of practical makeup, including moles that intentionally shift location between every take. Meanwhile, Smith makes callbacks to his Clerks debut when the Colleens place a “back in 10 minutes” sign on the Eh-2-Zed door. When eventually they return to let customers in, the Colleens deliver an insincere “Sooory ‘booot that.” The accents make Fargo look subtle.

As for the story, Yoga Hosers involves a weird series of developments, all seemingly chosen at random, none of them congruous. After two boys (Austin Butler and Tyler Posey) invite the Colleens to a senior party, the girls learn they have to work that night. So they invite the boys to a back-room Eh-2-Zed fiesta, only to learn the boys are Satanists more interested in their souls than their bodies. No matter, as the devil-worshipping boys meet an uncomfortable end courtesy of Nazi “wiener babies”—little Hitler sausages (played by Smith himself) filled with “concentrated sour kraut” and animated with the cheapest of cheap special FX—who crawl up the anuses of their unsuspecting victims and emerge from their mouths.

As the Colleens’ history teacher (Vanessa Paradis, mother of Lily-Rose) foreshadows in an earlier lesson, Manitoba Nazis led by the nefarious Adrien Arcand (Haley Joel Osment) long ago infiltrated Canada and have since disappeared. Arcand’s disciple, aspiring sculptor (and wildly mediocre celebrity impressionist) Andronicus Arcane (Ralph Garman), has taken up the cause by creating foot-long clones of Hitler out of sausages (huh?). But rather than enact Arcand’s final solution, Arcane, soured by the critical rejection of his art, wants to kill all art critics—an obvious way for Smith to once again proclaim his disdain for critics. Arcane argues that he’s “not talking ‘boot killing great people, just critics.”

“Why haters gotta hate?” characters shout about critics, channeling Smith’s feelings in the absurd climactic scene in which the Colleens use their yoga abilities to stop a hockey-masked “Goalie Golem”. It’s unfortunate that Smith remains so angry about his poor critical track record in the last several years. (Then again, everything he’s released since Dogma has been a far cry from his streak of 1990s hits.) Feeling wounded, he’s using his art to lash out; however, his reaction is an ugly, childish response presented in the form of an incoherent, juvenile movie. It might be a worthwhile message in a better movie. But he hasn’t done his audience any favors, as many walked out during my screening.

You would think Smith would want to deliver the best possible movie to showcase the talent of Harley Quinn and Lily-Rose (who show pluck, but they’re not professional actors). Instead, he throws together a bunch of nonsensical ideas, none of which work or deliver even a modestly entertaining experience. From texting teens to Satanists to wiener babies, Yoga Hosers seems like it was conceived under the influence as a lark, and then realized through a series of in-jokes no one but the Smith and Depp families would get. Indeed, it’s difficult to imagine anyone but these two families finding the experience charming or funny. Unfortunately, the movie marks the second entry in Smith’s proposed “True North” trilogy, which means audiences must endure at least one more round of Smith’s Canada-centric self-indulgence.