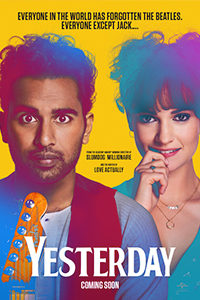 What if the power suddenly went out all over the world and, when it came back on, all trace of The Beatles had disappeared? And then you discovered that no one remembers them, web searches only return various insects, and yet somehow, miraculously, you’re apparently the only person on Earth who’s heard of them. Would you write down their music, what you could remember anyway, and pass it off as your own, reaping the superstardom and notoriety of the Fab Four? That’s the question asked by Yesterday, a charming little high-concept romantic fantasy written by Richard Curtis, whose penchant for music is evident in Love Actually (2003), Pirate Radio (aka The Boat that Rocked, 2009), and most of his other projects. Rather than make the film himself, Curtis teamed with director Danny Boyle, whose presence behind the camera is usually like an adrenaline syringe injected into the heart of his films, pulsating with energy and emotional vibrancy. But Boyle’s work on Yesterday finds him in a different mode; he’s comparatively subdued. The result is a capably made and enjoyable experience, yet the film looks and feels like something from Curtis’ body of work. It’s the least Danny Boyle of all Danny Boyle films.

Wannabe singer-songwriter Jack Malik (Himesh Patel) has struggled for a decade to make something of himself, aided by his manager and longtime platonic friend, Ellie (Lily James). Jack plays alone with a guitar, unaccompanied by other bandmates. He performs at underwhelming venues, mostly coffee shops and one particularly unattended music festival tent, singing his upbeat original “Summer Song” and convincing no one but his group of friends in attendance. During a 12-second worldwide power outage that remains unexplained, a bus hits Jack, and when he wakes up, he realizes that all evidence of The Beatles has disappeared when, after his friends give him a guitar to replace the one destroyed in the bus accident, he plays “Yesterday.” They don’t recognize the song, but they’re moved. Most of them, anyway. “It’s not Coldplay,” remarks his friend. “It’s not ‘Fix You.’” Further investigation reveals that this isn’t some elaborate practical joke. The Beatles are gone, or more accurately they never were. Except, Jack remembers them and their music. Grappling with the morality of his situation for the briefest of moments, he quickly resolves to ensure Malikmania by passing off The Beatles’ songs—at least, the ones he can remember—as his own.

Before long, Jack performs their music at a few small gigs and earns the attention of Ed Sheeran, playing (presumably) a more egotistical version of himself. Sheeran helps catapult Jack into the cultural consciousness with the influence of his Mephistophelian agent Debra (Kate McKinnon, overplaying every scene as usual). It leads to some awkward moments when Jack claims sole authorship of the songs, such as when Sheeran asks what inspired “Hey Jude” and he has no personal story about its creation. Or watch the cringe-worthy scene when Jack tells his parents that listening to his song “Let it Be” for the first time is like watching Leonardo Da Vinci at work—it’s an apt comparison for Jack to make about The Beatles, but it looks hilariously egomaniacal when a songwriter makes that correlation to himself. Jack’s music, meanwhile, continues in solo mode, and while Patel’s versatile voice results in covers of Beatles ballads with delicate soul and rock tunes like “Help!” with a post-grunge desperation, his versions lack the essential harmonies of John, Paul, George, and Ringo. And though, for a while, Yesterday plays like a commentary on the blood-sucking music industry and its willingness to fabricate marketing-approved pop stars and then live on them like vampires, Curtis has other things on his mind. 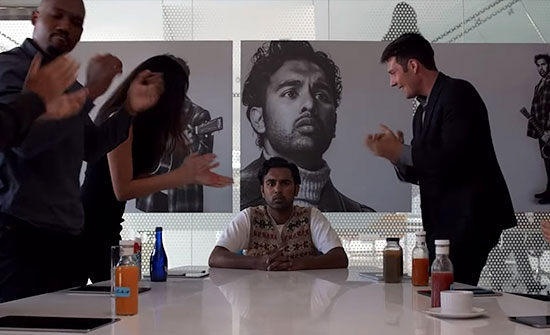 Similar to most of Curtis’ work, the underrated time-travel romance About Time (2013) above all, the film uses the central hook to tell an affecting love story. Nevermind what caused Jack to enter what must be another dimension, where not only The Beatles but Coke, cigarettes, and Harry Potter do not exist. The reasons are not important. Much of the film’s second half, after Jack has achieved some level of fame and left Ellie behind, involves Jack and Ellie realizing they love one another and yet, due to bad timing, remain unable to align. It’s anyone’s guess why these two charming, attractive people hadn’t explored the idea of a romance before, given that their friendship started in the seventh grade, but no matter. What becomes apparent is that Curtis has written Ellie as a flesh-and-blood Elenor Rigby. She’s a lonely person who belongs with Jack, and in that, she’s an underdeveloped character and a male fantasy, and as a Rigby stand-in, perfectly suited to Jack’s ideal (James played a similar role in Baby Driver). Regardless of the lack of dimension to this situation, the romance is fanciful and escapist.

As alluded to, what proves most troubling about Yesterday is the lack of Boyle’s visual signatures and tempo. Of course, it would hardly make sense for Boyle to employ his usual thumping electronic music in a film about the love of Beatles music, but his kinetic editing and roving cameras are oddly absent as well. A few moments where Jack and his comic relief road manager Rocky (Joel Fry) evade screaming fans recall Richard Lester’s hysterical A Hard Day’s Night (1964), and those manic scenes that followed the band in Liverpool and London as throngs of foaming Beatlemaniacs gave chase. There’s also a gorgeous-looking sequence where Jack, at the height of his success, stands before three large video screens that summarize his celebrity—a moment that replaces the otherwise obligatory makin’-it montage in many films of this ilk. Still, most of Yesterday is shot by cinematographer Christopher Ross, whom Boyle worked with on the FX miniseries Trust, and Ross shows little of the electricity found in Boyle’s usual collaborator Anthony Dod Mantle.

In that respect, Yesterday may prove to be a disappointment for Boyle loyalists, even though it contains all the vulnerable romanticism and witty pop-culture humor of Curtis’ output (I loved the line about the miracle of Jack becoming an international star is compared to the unlikelihood “of Benedict Cumberbatch becoming a sex symbol”). The film is loaded with memorable quips and chummy humor, topped with a shameless-if-effective romantic climax, and layered throughout with some of the best music ever written. All the while, the surprises of this world-without-The-Beatles keep emerging, leading to some touching revelations. Though Yesterday doesn’t have the dynamism or experimental quality of Boyle’s more urgent cinema (Trainspotting, Sunshine, Slumdog Millionaire), it’s undeniably pleasant. If nothing else, Boyle and Curtis have reminded viewers of the influence and timelessness of The Beatles. As one character observes, “A world without the Beatles is a world that’s infinitely worse.”