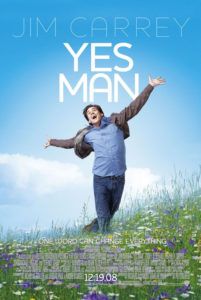 Pessimists and recluses beware; Yes Man is not the movie for you. Wet blankets will be made to dry up. Cynics will be asked to improve their spirits or leave the theater. Only those willing to conform to a set of optimistic, positive thinking ideals are made to feel welcome in this film. And that’s all well and good. There’s nothing wrong with positive thinking. But do we have to endure Jim Carrey in another role where he’s beckoned by uncontrollable powers to engage in acts of wacky zaniness?

Carrey plays loan officer Carl Allen, whose entire day consists of turning down loans with stern rejections, avoiding his friends in favor of time alone, and acting up the sad sack role that was written for him, badly. He’s wholly committed to saying “no” to everyone and everything. And then along comes Carl’s enthusiastic friend Nick (John Michael Higgins), who drags Carl to one of those self-help presentations (a.k.a. cons) in a hotel event room. Motivational speaker Terrence Bundley (Terence Stamp) preaches about the power of “Yes” opening doors in life, and everyone in the audience chants along like a Nazi rally. Carl is singled out for his negative attitude and opted into a “covenant” that compels him to say “yes” in any and all situations.

There are some appallingly unfunny and cheesy moments pushed beyond measure, such as when Carl plays acoustic guitar to potential suicide jumper, Luis Guzmán, singing Third Eye Blind’s “Jumper” to serenade him down. The crowd below joins in the song too, and the audience, we’re rolling our eyes. Or there’s the scene involving Carl’s elderly neighbor Tillie (Fionnula Flanagan), who asks if he’s interested in some dentures-off oral “release.” Of course, he must say “yes,” though everyone in the audience screams “no, No, NO!” …Did they have to take it there?

I could go on describing his bungee jumping and flying lessons and bar fighting and the way his friends take advantage of his agreeing to everything, but why bother? Things have a way of working out. He randomly meets the impulsive Allison (Zooey Deschanel), whose quirky band name “Munchausen by Proxy” and jogging photography class bear a phony Hollywood comedy idiosyncrasy. They fall in love. End of story.

Perhaps you remember Liar Liar, made in 1997, wherein Carrey is a lawyer cursed to tell the truth. That film had the same basic outline. A man bound by some obscure force must do the opposite of what he normally would. Now a lawyer telling the truth all the time with brutal honesty, that’s funny. But Carrey pointlessly saying “yes” to any and all requests gets monotonous. The film is set up so we anticipate, as if we’re asking “What’s he gonna be asked to do now?” Aren’t we always asking that in Jim Carrey movies? And doesn’t the result usually disappoint?

Problem is, Carrey is older than his immediate costars by ten years or more, and he looks it. This should be a role for a younger comedic actor, someone who needs to make a name for themselves. Not Carrey, who has already been here and makes the whole procession feel redundant. His rubber-face routine has become cracked and worn, not so much elastic as flaky and boring. His talents, once appreciated on Eternal Sunshine of the Spotless Mind and Man on the Moon, have been squandered on this much-too-easy addition onto his filmography.

Luckily, Carrey has some charming costars to rescue him from utter embarrassment. After The Happening earlier this year, Deschanel returns to her romantic comedy brand of cute (but I’m beginning to wonder if she can stretch herself any further). Stamp must have been pretty desperate to take this role as the Yes! guru, but he fills it with appropriate presence. And almost stealing the show is Rhys Darby, the New Zealand-born actor from The Flight of the Conchords, as Carl’s geeky coworker Norman; with a goofy enthusiasm and posters for Harry Potter and The Goonies hung in his bank office, the character is silly fun.

Yes Man has a nice message about making the most out of life but at the cost of several abysmal cliché metaphors like “life is a playground, so go play” and so forth. You’ll chuckle at the antics that allow Carrey to flex his comedic muscles, but when things get serious, they couldn’t be less involving. Inspirational as the themes may be, it’s still a formulaic Jim Carrey comedy the likes of which we’ve seen before, and will no doubt see again. Depressing, isn’t it?