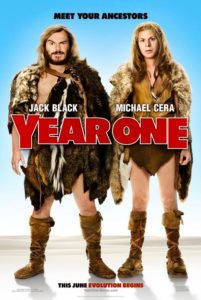 Year One contains a lot of funny. There’s the funny concept, lifted ever-so-slightly from Monty Python’s Life of Brian, about modern humor in ancient times. Funny actors like Jack Black, Michael Cera, David Cross, and others populate the cast. Harold Ramis, the funny director of funny movies such as Caddyshack and Groundhog Day, takes the helm. Writers Gene Stupnitsky and Lee Eisenberg, who work on the funny television show The Office, co-scripted the film with Ramis. And producer Judd Apatow, who helped make every funny movie in the last several years, oversaw the production.

So why is the result so painfully unfunny? The potential spoofs on history are enormous, as explored by Mel Brooks and the aforementioned British troupe in some detail. But Year One limits its scope to a rather small expanse of time; beginning with a hunter-gatherer tribe, it barely gets passed Sodom and Gomorrah. Does the title refer to the first year in recorded history? If so, aren’t we coming in a little late in the game? Or perhaps we’re coming in too early, and the title refers to the first year on the Christian calendar, in which case we question, where’s Jesus? Don’t bother thinking about the timeline. There’s not a cohesive one to speak of.

Black and Cera star as two tribal primitives, complete with loincloths, shaggy hair, and pelts for clothes. There’s no point in telling you their characters’ names because the actors aren’t even trying to dodge their typecast onscreen personas. Black is just Black, still a rock-n-roller who blurts his lines with blind confidence. The witty Cera is seemingly present only to further punctuate the film’s barefaced irony, no different than any of his roles since Arrested Development. Will Cera still be playing the awkward man-boy when he’s thirtysomething? Probably. Meanwhile, Black feels right at home in caveman attire. Cera only feels at home in his signature hoodie, as seen on Juno, Nick and Nora’s Infinite Playlist, Superbad, and should I go on?

After eating the forbidden fruit and mistakenly burning down their village, Black and Cera leave their forest people to see what lies beyond the mountains, finding that the world does not abruptly end as their people imagined. An array of Biblical (allegorical) characters awaits them, including the murderous Caine (Cross) and his brother Able (Paul Rudd), and the circumcision-obsessed Abraham (Hank Azaria) with his would-be sacrificial son Isaac (Christopher Mintz-Plasse). When Black and Cera wind-up in prehistory’s Las Vegas (i.e., Sodom), they attempt to set free their tribal sweethearts (June Diane Raphael and Juno Temple) who were captured and sold into slavery.

Once they reach Sodom, it becomes clear that the movie was cut down from an R-rating to PG-13, undoubtedly to appeal to teen crowds. This is not only true because no sodomy is depicted in Sodom, but because the editing seems choppy and several scenes look clumsily abbreviated. Perhaps Ramis dealt with some nasty studio influence over at Columbia Pictures, who insisted that he keep his base humor down and instead insert thumpin’ hip-hop beats into the soundtrack (yes, I’m serious). By contrast, it’s strange that the studio left in the ending’s message about religion being a farce and to find your own destiny.

Winking at the audience to no end, Year One tries desperately to be sardonic and tongue-in-cheek about historical and Biblical parables. Though, the audience gets the joke, and thus all of the jokes throughout, in the first few minutes. The human sacrifices and prophesying through pigs’ guts is all very clever, in that Can you see that I’m being clever? way. The gags don’t change or incite much laughter beyond the occasional chortle, which is really unfortunate for the amount of talent amassed here. What Ramis doesn’t do is surprise us. Not with his casting, not with the rethreaded variety of humor, not with his big-budget presentation or elaborate set designs. What we’re left with is a dreary, groan-inducing comedy that fails to be funny or entertaining under even the most lenient terms.