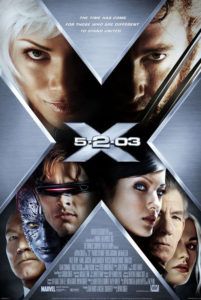 The second in the popular franchise, X2: X-Men United is comprised of several subplots about mutant-powered superheroes that bind together in the end to make a tightly bound rope. And unlike other Marvel Comics adaptations from the producers at Fox (Daredevil and Fantastic Four 1& 2), the film doesn’t hang itself in the process of bringing, in some cases, forty years worth of comic storylines to the screen. In many ways, this movie is solely for the fans of the many comic series; it includes minor fanboy allusions here and there to keep the comic book reader happy, while always making sure the film’s story is solid entertainment with shy hints of social commentary. Being that the first film, X-Men, did more than expected in box office returns, the filmmakers were given some leeway on their creative exploration, not to mention their budget. Director Bryan Singer, who helmed the first, returns to erect a major step in making comic book movies the right way. With films like Iron Man, Spider-Man 2, and The Incredible Hulk to follow, Singer’s sequel became the first truly great movie to come from the Marvel Universe

Based in part on the graphic novel God Loves, Man Kills by longtime X-comic writer Chris Claremont, each aspect of the production improves upon the first, beginning with the story and special effects. The advancements in CGI in the three years between the first film and this sequel are showcased in the wonderful first sequence where a teleporting mutant, Nightcrawler (Alan Cumming), pops in and out of various hallways and rooms in The White House to make a threat against the president. This incites the president to allow mutant-hater William Stryker (Brian Cox) to begin his program to control mutantkind, which, given Stryker’s particular prejudice toward mutants, would ultimately lead to a mutant-human war. Professor X (Patrick Stewart) and team leader Cyclops (James Marsden) visit the human-hating Magneto (Ian McKellen) to see if he was responsible for the threat on the president. They learn he wasn’t when Stryker kidnaps them in hopes of using Professor X’s psychic abilities to kill every mutant on the planet.

Meanwhile, Jean Grey (Famke Janssen) struggles to control her suddenly out-of-control powers. And everyone’s favorite cigar-smoking, adamantium-clawed tough-guy, Wolverine (Hugh Jackman, reminding us why he’s so perfectly cast in the role), returns to Alkali Lake, a place from his amnesiac memory where he was once subject to the Weapon X program’s tortures. Turns out Styker was involved in mutant testing in Weapon X too, and Wolvie has a metal-laced bone to pick with him about it. Beyond the main characters, there’s plenty going on in the background with smaller parts, most to be developed in future sequels. Each character is asked, given the impending war, whose side they’ll be on. Magneto convinces the fire-powered Pyro (Aaron Stanford) to join his Brotherhood of Mutants—which in the comics was the none-too-subtle The Brotherhood of Evil Mutants—whereas Bobby Drake, aka Iceman (Shawn Ashmore), picks the X-Men. And Nightcrawler and Storm (Halle Berry) help each other realize that being a mutant is nothing to be ashamed of.

The sole problem with the picture is its misuse of several key characters within the comic franchise. Just as in X-Men, side-villains are used as cool-looking baddies and not fleshed-out characters emotionally linked to their enemies, our heroes. Consider Lady Deathstrike (Kelly Hu), who in the movie is little more than Stryker’s goon, decked out with sharp adamantium fingernails. In the comics, she was Wolvie’s former lover bent on revenge because he killed her father during his escape from the Weapon X facility. There was an element of romantic tragedy there, here washed over by the script’s desire to keep the story moving, but also appease fans looking for familiar faces. Singer’s approach to the X-Men has been in capturing their complicated status as a superhero team. On one hand, they’re working as vigilantes the government would prefer were not in action. On the other, they inspire, both in the confines of the narrative and viewers in the audience, to stand up for civil rights—which within the well-structured plot of this film extends to basic Homo sapien (and Homo superior) survival.

Because of the unnecessary inclusion of too many side-characters and mutants for the sake of mutants, inattentive non-fans will find the film confusing at times. Since so many characters make up the X-Men Universe, figuring out how they’re all connected, who loves and hates who, and the motivations in-between can be confusing, especially for non-readers. But that’s also a positive, because the filmmakers are clearly trying to pack in as much material from the various source comics to appease fans, and the result still remains a salient, exciting adventure. That the screenplay, written by more people than I have a willingness to mention in this review, still manages to tell a clear story bound by social and emotional drives is pretty darn impressive. Most impressive is Singer’s handling of the mutant action; the standout sequence involves Wolverine unleashing fury on a band of Stryker’s soldiers who’ve infiltrated the X-Mansion. Jackman’s intimidating ferocity in these scenes imbues his character with equal parts charisma and danger, the elements that have made Wolverine so appealing to millions of fans.

Even though Singer and the writers inject far too many mutant participants into the proceedings, X2: X-Men United manages surprising lucidity for the amount of characters and cross-cutting conflicts its serve. And despite some poor choices spearheaded by Fox’s executive force, namely Tom Rothman, Singer congeals everything in such a way that another filmmaker could not. What remains the series’ greatest advantage is the message it sends. Inspiring hope for equality, and furthermore suggesting that governments are at the mercy of the populace, the franchise actionizes these themes to gratify both the mind and senses like few comic book movies have ever done. Most significantly, in the end, you’re left wanting the stories to keep going with the promise this film exudes. Unfortunately, the subsequent sequel doesn’t live up to that promise, so revisiting Singer’s second entry in the series is a bittersweet experience.