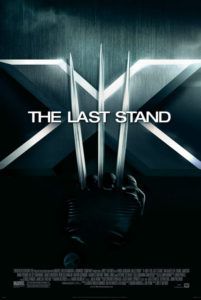 In watching X-Men: The Last Stand, my inner fanboy has been locked away along with his burning concerns for comic book accuracy. Attention normally given to scandalous movie production drama is focused elsewhere, in favor of what happens on the screen, versus what happened behind it. Years of celebrating X-Men in its various comic and cartoon incarnations will be set aside. Even my disdain for hack director Brett Ratner will be ignored, all so I can write this: X-Men: The Last Stand is a fun movie… Now that that’s over, I’ll do my best to ensure those other parts of me stay contained for the duration of this review, but I’m not making any promises. What is supposedly the last X-Men film, this third entry in the franchise incorporates big storylines in a short running time. There’s enough material here for several films, but then again, there are so many X-characters running about onscreen, the only way to give them all their due is to make a six-hour movie. Rush Hour series director Ratner takes over the helm from Bryan Singer, who left to make the disappointing pseudo-sequel-relaunch-thingy Superman Returns. Singer’s abandonment hurts, but Ratner also does his best work.

This sequel’s conflict remains not between superheroes and supervillains, but between mutants and humans. Geneticists have discovered a way to remove mutant powers from the human genome, thus rendering a mutant “normal.” Rogue (Anna Paquin), who cannot touch another person because her power drains life during skin-to-skin contact, certainly prefers to be a standard generic human. But other, less attractive mutants might find the proposition stimulating, whereas mutants like Magneto (Ian McKellen) consider it genetic genocide. Taking his rightful place as the leader of homo-superior, Magneto wages war on humanity to stop this “cure” for mutants. All X-Men are given a chance to join Magneto’s cause or fight him. Jean Grey (Famke Janssen) remains dead after X2, wherein she sacrificed herself to save her comrades, but all at once she reemerges, reborn and linked to the ethereal entity known as Phoenix, which enhances her psychic powers with a fiery edge. She joins the bad guys, her state of mind overcome and Professor Xavier (Patrick Stewart) unable to help her. Meanwhile, the rest of the X-Men stick with Xavier’s cause of protecting the fragile relationship between humans and mutants.

What works best is the pace of Ratner’s film, as well as his inclusion of several mutants fans have clamored for on the big screen. Blue-haired intellectual Beast, aptly played by Kelsey Grammer under three feet of makeup, represents a welcomed addition to the cast. Angel (Ben Foster), a wealthy young man with massive white bird wings, has a small but poignant subplot. The metal-laced Collosus (Daniel Cudmore) and the spunky matter-phasing Kitty Pryde (Ellen Page, before Juno) join the team too. But Magneto recruits the unstoppable Juggernaut (Vinnie Jones) and Multiple Man (Eric Dane) to even up the playing field. The ensuing battles are impressively shot, and top-notch special effects are standard for this series. Ideas and several ongoing story arcs are juggled about with surprising clarity. But this trilogy manages to convince us of its own validity almost solely by the talent of its unbelievably good cast. Beyond two of Britain’s finest performers, there’s Aussie Hugh Jackman as the film’s central star, the cigar-chomping badass Wolverine. Watching them all in action together has a certain appeal of its own, as the gravity of star power is sometimes more drawing than a good script. Sometimes.

The production, however, was notoriously tampered with by Fox executive Tom Rothman, who likely drove away Singer, as well as Singer’s initial replacement Matthew Vaughn (Stardust), who left because of “creative differences”. And if Rothman didn’t drive them away, he didn’t make them feel welcome. Rothman reportedly never wanted to greenlight the first X-Men film, and after the second, rumor has it he wanted no more. So rather than letting the storyline progress naturally over several more sequels, Rothman wanted to finish up the series in one fell swoop. Not only does this harm the integrity of the story, it wastes away any potential sequels which would have surely earned Fox big bucks on the turnaround. Creatively and financially, Rothman made terrible choices concerning this film. Add to his rushing the now Academy Award-winning Halle Berry who demanded that the movie center on her side-character Storm, and you have a production in chaos.

Since I just broke my promise about not griping about the production, I may as well bitch about the inaccuracy. “The Phoenix Saga” was the X-Men comic storyline to end all X-Men storylines. Bound by themes of love and tragedy, it should have been this franchise’s height. Singer knew that, which is why he made time in X2 to suggest that eventual happening would occur in the sequel. Instead, Ratner or Rothman or both decided what fans wanted wasn’t important, and reduced a vast dramatic turn into a mere subplot. Because of this, approaching the third X-Men film is like watching Sony’s Spider-Man 3, which made the same mistakes. That film’s director, Sam Raimi, was forced into writing the villain Venom into his screenplay, though Raimi’s story was already worked out with Sandman as the central villain. And so, the pivotal arch-villain for Spider-Man was limited to ten minutes of screen time, causing oodles of disappointed fans. Like Raimi, the filmmakers of The Last Stand didn’t know or didn’t care about the significance of the “Phoenix” storyline, and they squandered what should have been a central arc into a pithy and insultingly brief addendum. Furthermore, the writers inexplicably kill off key members of the X-team, namely Cyclops, Jean Grey, and Professor X, leaving the future of this franchise to unconnected spinoff movies. What a waste.

At several points during The Last Stand, the viewer wonders how many plots and subplots one film can handle, and ultimately they all prove to be too much for one 104-minute movie. The mutant cure, the Phoenix, the newer mutant character—it’s all cluttered together and none of the individual storylines are satisfyingly resolved. And yet, despite my grievances, I stand by my statement that X-Men: The Last Stand is a fun film; there are interesting moments and a few individual flourishes that are charming. It’s fun for audiences without any devotion to comic book accuracy. And when screening the film, I watch with a disconnected mindset, allowing the production value and mutant action to overcome the adversity of an overly busy and confused story. But, as objective as my movie critic persona tries to be, there’s a part of me screaming inside at the way the film was raped by studio interference and fast-tracking. Should future X-Men movies be produced this way, expect nothing less than frustration patchily glossed over by their ability to offer ample diversion.