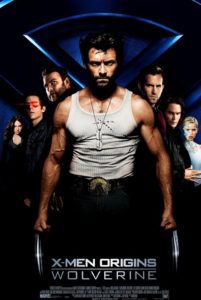 He’s the best there is at what he does. That includes smoking cigars, grunting monosyllabic comebacks, and slashing-up bad guys with all the fury of his animal instincts. Complete with a healing factor that makes him resistant to harm, he’s a three-pronged killer whose inborn decency comes through between his intermittent feral rages. Of the mutant team X-Men, only Logan, a.k.a. Wolverine, stricken with his nasty case of amnesia, has the most potential for a dramatically viable solo exposition. Unfortunately, his spinoff film fails to meet current high standards for gravitas-laden superhero fare, and like the other films in the X-Men trilogy, it resolves to employ big effects over big ideas. X-Men Origins: Wolverine has enough cinematic eye-candy by way of period jumping and flashy mutant-powers that any casual fan of the franchise will be aptly diverted. The production looks expensive, so it’s easy to lose yourself in the action. What the film doesn’t have are enlightening observations on its main character, whose mysterious past is finally revealed in this prequel. And considering the following and dramatic possibility inherent to the character, the result feels too undemanding when compared to its potential.

Hugh Jackman stars once again as the adamantium-clawed hero, in an uncannily spot-on performance that admirers of both the actor and his character can appreciate without reservation. It’s the role that made Jackman a star back in 2000 with Bryan Singer’s first X-Men movie, and he’s only gotten better over the years. Jackman embodies the character from his wispy hair to his fierce scowl. And though fanboys will inevitably quibble over comic-to-film inconsistencies, no one can dispute what a charismatic and powerful presence Jackman provides. One strange feature about Jackman’s appearance here: the production renders Wolverine’s signature claws with distractingly bad CGI instead of metal props as in previous films. The effect is downright terrible.

After the brief prologue that shows a young Wolvie running away with his elder brother Victor in 1845, the title sequence annoyingly passes over our hero’s next one-hundred-plus years via montage. We see him fight in every American conflict from the Civil War to Vietnam alongside his brother (the older version played by Liev Schreiber). The mutant siblings are later approached by William Stryker (Danny Houston), who proposes that they join his elite team of special agents. Alongside the mercenary-with-a-mouth Deadpool (Ryan Reynolds, rumored to have his own spin-off movie in the works for his character), teleporter Wraith (Will.i.Am), electric guru Bolt (Dominic Monaghan), and sharpshooter Agent Zero (Daniel Henney), our hero and Victor do bad deeds for Stryker. Except, senseless killing doesn’t appeal to Wolverine and he leaves the group, but Stryker needs him to complete the required-by-genre nefarious plan. So years later when he’s living peacefully in the Canadian Rockies with his girlfriend Silver Fox (Lynn Collins), Wolverine’s past comes back to haunt him.

This all leads to our realization that Wolverine’s past is best left a mystery, as explication only serves to eliminate his most intriguing of characteristics: his forgotten and uncertain memory. Once we know everything about him, what more is there to discover? If his mystery ceases, he ceases to be interesting. His crucial dynamic has always been trying to attain self-understanding through his past, both wanting to know his origins and not wanting to know because undoubtedly he committed horrors buried by time. Perhaps if Wolverine remembered his past from the “not-too-distant future” setting of the X-Men movies, the events from this film would have greater significance to the character as a reflective surface. But what is the dramatic reason behind showing the audience Wolverine’s past if the character himself cannot learn anything from it? The movie doesn’t bother answering such questions. Instead, the script by 25th Hour scribe David Benioff and Swordfish writer Skip Woods loses track of its main focus, concerning itself more with incorporating as many mutants as possible without considering their due place within the narrative.

Clamoring fanboys will delight that Gambit (Taylor Kitsch) finally appears onscreen, but he seems forced into the plot, and the performance is lackluster for it. There’s really no end to the cameos—among the many others are super-chunk Blob (Kevin Durand) whose mutant power is fatness and the diamond-skinned psychic Emma Frost (Tahyna Tozzi). The inclusion of such roles is fan service that actually does any real fan a disservice by not making the storyline and characters true to the comics. But comic accuracy has never been Twentieth Century Fox’s strong suit with the X-Men franchise. Whereas it was easy to blame the disappointing-if-entertaining overkill of X-Men: The Last Stand on hack director Brett Ratner or Fox suit Tom Rothman, where the fault lies here is less apparent. Perhaps it was the unfocused script. Or perhaps director Gavin Hood, whose South African treat Tsotsi from 2005 boasts Hood’s impressive skill, was overpowered on his first big-budget studio film by Rothman’s notorious meddling. Likely the combination of sub-par script, misguided studio interference, and little inclination to be true to the source material generated this disappointing final product.

Fortunately, just like the other X-Men films, the lack of consistency and high drama doesn’t influence its capacity for providing popcorn-munching superhero escapism—undeniable is the sheer mindless entertainment value of X-Men Origins: Wolverine. Mindless being a key component here. The ultra-buff Jackman’s hack-and-slash routine is met with plenty of impressive battles and elaborate set pieces to showcase the actor’s physicality and comfort within his role. Though not the emotionally satisfying experience many of us hoped for, the result is kind of fun, in a watch-only-if-you-don’t-care way.  Maybe ten or fifteen years from now, some serious-minded director will relaunch X-Men or Wolverine or both, imbuing them with the desired dramatic sensibilities that the reinvention of Batman Begins had over its franchise’s predecessors. But it’s doubtful they would ever find another actor to portray Wolverine with half the quintessence of Jackman. And it’s regrettable that a franchise brimming with prospect wasn’t handled with more respect from the start, and less like the live-action-version-of-a-cartoon that this series proves to be.