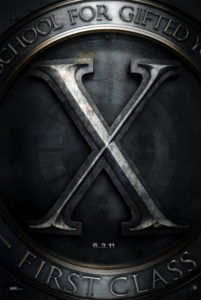 Just as J.J. Abrams refreshed a dying franchise with Star Trek by creating a sequel-prequel-reboot in one, Twentieth Century Fox’s “X-Men” series tried something similar and failed, quite miserably, with X-Men Origins: Wolverine. But director and co-writer Matthew Vaughn, who abandoned another disappointing X-film (The Last Stand) to hack Brett Ratner when he started losing creative control to nosy executives, returns with a refreshing and energized origin story, X-Men: First Class. Produced in part by Bryan Singer, helmer of the first two installments, Vaughn’s film takes daring steps for a comic book adaptation and relies on strong character and an unlikely historical backdrop for a summer blockbuster, while also infusing international flavor and a retro-James Bond vibe that lend definite charm. Just like Abrams, Vaughn has given new life to a commercial film by thinking outside of the box.

From a story by Singer and Sheldon Turner, and written by scenarists Ashley Edward Miller and Zack Stentz (from Thor), with Jane Goldman and Vaughn, the story deepens the relationship between Charles Xavier and Erik Lensherr. As played by James McAvoy and Michael Fassbender, respectively, the two characters guide a narrative about reestablishing how mutants are outsiders, feared and despised by the world at large. More than costumed supermen swooping down to save the day, our heroes engage in covert battles for human rights, defending mutant kind against prejudice and taming notions of superiority in the face of evolution, and ultimately revolution. Set these basic themes into the global panic that was the Cuban Missile Crisis, along with generous but never overabundant comic fan service, and you have an effective, carefully imagined piece of entertainment.

Though deviating from Stan Lee’s original origins first published in 1963, Vaughn and company return to the Auschwitz prologue of X-Men in their opening, harkening back to what originally worked about the franchise and expanding from there. After a sudden burst of magnetic energy as he watches his parents taken away by Nazi soldiers, young Erik Lensherr becomes a guinea pig for the odious Dr. Schmidt (Kevin Bacon). Years later in 1962, an adult Erik hunts down former Nazis to exact revenge on Schmidt, now a Bond-esque villain (complete with his own personal submarine and swanky duds) and leader of the Hellfire Club, going by the name Sebastian Shaw. Along with his scantily-clad psychic cohort Emma Frost (January Jones), Shaw attempts to arrange a nuclear war among humans so mutants can seize control. At the same time, ladies’ man (hilarious) and Oxford scholar Charles Xavier (James McAvoy), the world’s foremost expert on human mutations, receives a visit from CIA agent Moira MacTaggert (Rose Byrne), who witnesses Shaw using mutants to escalate the crumbling conflict between the U.S. and the Soviet Union.

Charles, along with his adopted sister Raven Darkholme (Jennifer Lawrence, from Winter’s Bone), helps MacTaggert locate Shaw in a botched encounter that introduces him to Erik, whose initial friendship provides the groundwork for a CIA-sanctioned training facility for young mutant recruits. Of course, Charles’ level-headed optimism for coexistence between mutants and humans begins to clash with Erik’s more aggressive, emotion-driven views on mutant superiority, though always with a mutual respect between them. As the team of mutant youngsters assembles and trains for an encounter with Shaw, some teen heroes recede next to more familiar faces. Why, for example, would filmmakers choose forgettable filler such as the insect-winged spitter Angel (Zoe Kravitz) and “adapter” Darwin (Edi Gathegi) over more familiar comic characters? Nevertheless, Raven, the future Mystique, decides on groovy “code names” for her teammates: the energy-throwing Alex Summers (Lucas Till) becomes Havok; Jekyll-Hyde combo Hank McCoy (Nicholas Hoult) becomes Beast; screamer Sean Cassidy (Caleb Landry Jones) becomes Banshee. The origin of their names may be silly, but at least they have names. Shaw’s anonymous goons, played by Jason Flemyng and Alex Gonzalez, are better identified by their powers—the “teleporting guy” and the “whirlwind guy” are unremarkable thugs.

With filler characters lost in the shuffle, the film never misses a chance to build on the paranoid staging of growing nuclear catastrophe, and never loses sight of the central conflict between Professor X and Magneto. Raven and Hank even act out a microcosm-like subplot mirroring the one between Charles and Erik, given the opposing ways in which they cope with looking different. Both arcs offer surprising emotional impact.  Production values are expectedly high, from Chris Seagers’ impeccable retro-modern design work to the oodles of special FX used to capture mutant powers in action. Only during one or two scenes, and most noticeably with Mystique’s transformations (an effect which has never really looked right throughout the “X-Men” franchise) does the CGI waver. Once again, the focus is placed on the powers of the main players (Magneto, Shaw, and Professor X, though the latter has no outward powers to animate), whose abilities look fantastic. The less interesting students have underutilized powers and therefore less impressive effects to portray them. But it’s the little things about the production that render any missteps completely forgivable, leaving the end result rather excellent.

Consider how often characters speak another language, requiring subtitles; there are fewer scenes in English during the phenomenal first-half than there are German, Russian, or Spanish. Or consider how Vaughn has all but recreated the Pentagon’s “war room” straight from Kubrick’s Dr. Strangelove. Or the nuanced way McAvoy touches his temple when straining his character’s powers looks as though he’s actually reaching into himself, while Fassbender physically surrenders himself to his role, putting his entire body into his performance and making us believe the strain he feels when manipulating metallic objects with his mind. McAvoy and Fassbender give performances better than anything this franchise has seen before—yes, even against thespians like Patrick Stewart and Ian McKellen—as the writing allows them to produce motivated performances filled with raw drama and emotion. As the film progresses, one realizes we’re watching less for a blockbuster spectacle and more to see how the conflict between Charles and Erik will play out.

Beyond most Marvel Comic adaptations in its capacity to entertain and reward audiences, and certainly the best of the once-beleaguered franchise, X-Men: First Class reminds us that reboots don’t require a darker, moody approach to heighten the dramatic relevance—just good storytelling and a director talented enough to perform his duties with confidence. Stardust and Kick-Ass proved Vaughn had talent enough for satiric approaches to common genres; here the director plays it straight and his talent is further vindicated. Vaughn, along with Singer’s undeniable touches on the production, has achieved something impressive, delivering a summer movie where audiences will leave talking about the performances and the ideas, not the mindless battles. Not since Christopher Nolan’s Batman films has this been the case. And all this without benefit of adamantium claws (well, sort of).