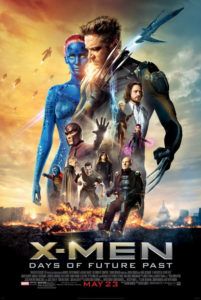 Based on Marvel’s much-loved 1981 comic storyline by Chris Claremont and John Byrne, X-Men: Days of Future Past seeks to undo what for fanboys were crimes committed in previous X-entries, while also endeavoring to deliver the biggest sequel in 20th Century Fox’s unsteady franchise. The film marks the return of Bryan Singer to superhero territory after he directed X-Men (2000) and X2: X-Men United (2002), but then gave up the reins to Brett Ratner on the disappointing X-Men: The Last Stand (2005) and Gavin Hood on the abysmal X-Men Origins: Wolverine (2009). Only in recent years has the franchise recovered from those blows, offering Matthew Vaughn’s retro-vibed prequel X-Men: First Class (2011) and James Mangold’s impressive spinoff The Wolverine (2013, better on the “extended cut” Blu-ray), both steps in the right direction. And like Singer’s original two, Days of Future Past contains more attention to character development and dramatically grandiose situations than those that followed, just on a much larger canvas.

In this seventh onscreen outing for Marvel’s mutant team, Singer sets out to achieve a number of lofty ambitions for Days of Future Past, and most of them are attained through the plot device of time travel. In a way, the film serves as an ostensible reboot and maintains, even restores, all the best elements from previous films while erasing some of the more questionable decisions filmmakers have made about classic characters (the deaths of Cyclops, Jean Grey, and the others in The Last Stand). To this end, the film recalls Singer’s Superman Returns (2006), an oddity which took place after 1980’s Superman II, strangely pretending the 1983 and 1987 sequels never happened. In another way, the film’s necessity to reboot using time travel, yet preserve particular aspects of the previous continuity, recalls J.J. Abrams’ Star Trek reboot from 2009. What’s more, by combining the original X-Men castmembers with the prequel cast from First Class into a massive storyline, the new film feels like the kind of crossover extravaganza Marvel accomplished with The Avengers.

Following only the broad strokes of the comic storyline, the film involves a plot to send Logan/Wolverine (Hugh Jackman) back in time to prevent a dystopian, mutant-hating world from ever coming to pass. After some perfunctory and inconsistent commentary about the relationship between free will and determinism, the film opens in the future where the super-powered mutants and their defenders, who aren’t rounded up into internment camps, are hunted down by robots called Sentinels. These metallic, malleable Sentinels arrive on hovering carrier ships to obliterate mutants, whose powers they can imitate, and the ensuing battles have turned the world into a gray wasteland. Allies-turned-enemies Professor X (Patrick Stewart) and Magneto (Ian McKellen), now joined against a common threat, enlist Kitty Pryde (Ellen Page) to use her curious ability to send a consciousness back in time on Wolverine. In effect, Kitty transports Wolverine’s mind from 2023 into his own body in 1973, where he’s tasked with convincing the younger Professor X (James McAvoy) and Magneto (Michael Fassbender) to help him prevent the wayward shape-shifter Mystique (Jennifer Lawrence) from assassinating the Sentinels’ creator Boliver Trask (Peter Dinklage). If Trask dies, a series of events will unfold leading to the dystopia in the film’s prologue.

What’s surprising about this scenario is that no central supervillain exists for our heroes to fight; rather, the story establishes a post-apocalyptic future and the heroes set out to prevent it. The film’s momentum would have benefited from more time establishing the grim future world, but the screenplay by Simon Kinberg and Matthew Vaughn (the latter of whom was originally set to direct) is more interested in exploring the psychological states of its characters some ten years after the events in First Class. McAvoy’s disturbed and disenchanted Prof. X no longer has his powers or runs a school for gifted youngsters; like an addict, the paraplegic mutant eagerly injects himself with a serum (provided by Nicolas Hoult’s Beast) that allows him to walk but impedes his telepathy. Meanwhile, Fassbender’s vengeful Magneto has his own agenda after Prof. X and Wolverine help him escape from an underground Pentagon prison with the help of super-speedy Peter Maximoff, better known as Quicksilver (Evan Peters, from American Horror Story). How this pairing of Prof. X and Magneto engage in an ideological struggle over Mystique’s fate is the throughline of the film and results in some tumultuous emotions, leaving the usually moody Wolverine to seem uncharacteristically level-headed by comparison.

With less concentration on sheer spectacle or typical superhero dichotomies than any other Marvel property, Days of Future Past has several individual scenes rooted in suspense and special FX, but the film overall doesn’t feel like an action movie in the way other superhero films often do. There’s an impressive effect at the finale involving Magneto lifting the RFK stadium into the air, and much suspense revolves around Mystique and whether or not she’ll succeed in taking down Trask, though Mystique herself (thus Lawrence) is given little to do in terms of emotional range. But the film’s spectacles reach their height about mid-film in the sequence with Quicksilver. Singer shot these scenes at 3,000 frames-per-second to create the look that Quicksilver is moving faster than everyone else in the room. Moreover, when the mischievous character single-handedly disables four Pentagon guards, we see how for him everyone’s moving at a slower pace. Set to Jim Croce singing “Time in a Bottle”, the sequence has Quicksilver playing pranks and exhibiting a playful sensibility that’s missed after he’s all-too-quickly removed from the proceedings.

Fans who’ve been hungry for Sentinel action since their brief appearance in The Last Stand may feel underwhelmed, as the story reduces the major Sentinel vs. mutant battles to the truncated future scenes. These scenes feel removed from the central storyline, yet (the strange mix of) editor-composer John Ottman crosscuts between the 1970s scenes and dystopian peril to create tension. As a result, the 1970s cast fight a handful of expertly designed, sleek yet clunky-looking robots, but the malleable future Sentinels fight a vast array of mutants who barely have screentime or dialogue. The X-Men franchise is often guilty of injecting as many mutant faces as possible just to appease comic fans, and Days of Future Past is no exception. Appearing in abbreviated scenes or cameo are Halle Berry’s weather goddess Storm, Daniel Cudmore’s metal-skinned Colossus, Shawn Ashmore’s Iceman, the fiery Sunspot (Adan Canto), the tracker Warpath (Booboo Stewart), the energy-absorbing Bishop (Omar Sy), and most impressively the portal-throwing mutant named Blink (Bingbing Fan), whose mutant power is awesome to behold. Though she’s one of the top-billed performers, Anna Paquin also has a two-second cameo as Rogue, her scenes cut for reported pacing issues.

Much like First Class, many joys in Days of Future Past involve period details, such as when Wolverine wakes up in a waterbed, staring at a lava lamp with the sounds of Roberta Flack on the radio. Singer incorporates stylistic flourishes galore in the 1970s scenes, shooting with noticeable grain and several Zapruder-inspired moments of Super 8 footage. Also like First Class, the pairing of McAvoy and Fassbender outweighs all else onscreen, their characters plagued with complicated emotions delivered by two of today’s finest actors. But there’s a lot more going on in this film than the 2 hours and 10 minutes runtime can adequately cover; another 10-20 minutes of screentime could have expanded upon the terrors of the dystopian world, fleshed-out some of the newer characters, and increased the tension even more. Nevertheless, the time travel plotting and overall outcome of Days of Future Past are incredibly appealing, as is the post-credits scene that hints at things to come in the next sequel due in 2016, X-Men: Apocalypse. In the end, Singer moves things along at such a brisk pace that the film’s plot holes and few underwhelming elements are overshadowed by the thrills and pure scope of this blockbuster crossover, and he ultimately realizes many of those lofty ambitions he set out to achieve.