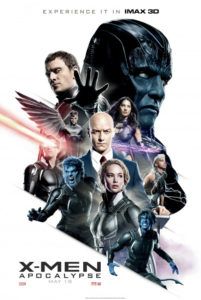 Next to the heavily plotted X-Men: Days of Future Past (2014), director Bryan Singer’s X-Men: Apocalypse is a leaner take on Marvel’s mutant superhero team. While Singer’s extended “Rogue’s Cut” of Days of Future Past developed his massive ensemble of characters to marginally superior effect than the theatrical cut, Apocalypse won’t need a second version on home video; the film itself allows the hero characters to grow within a single timeline and its narrative’s forward motion. Younger versions of classic characters (Jean Grey, Cyclops, Storm, Nightcrawler) are wonderfully reintroduced by talented performers, alongside younger-but-established versions of old favorites (James McAvoy’s Professor X, Michael Fassbender’s Magneto, and Jennifer Lawrence’s Mystique). There’s also a new screen villain, one of the comics’ most formidable foes, after whom the film is named, played by Oscar Isaac, an equally formidable actor. Unfortunately, the villain is the film’s least interesting or developed element, and that’s not something an alternate cut could fix. Apocalypse ends up being yet another X-Men film that contains plenty of mutant action, a few impressive set pieces, some creative choices that are bound to upset die-hard comic fans, and ultimately leaves you entertained, but not overjoyed.

Despite nine installments, dozens of characters, two timelines, and a few spinoffs, Fox’s X-Men franchise feels disorderly and fragmented. By contrast, the thirteen films in the MCU’s Avengers-verse feel more cohesive, like each one ties into the next. But Fox’s leadership since the first X-Film debuted in 2000 has been erratic and inconsistent, and the voice of the series has wavered. After starting strong with Singer’s X-Men and X2: X-Men United, the franchise was taken over by director Brett Ratner in 2005 for X-Men: The Last Stand, a film that disposed of fan-favorite characters, made lousy use of a classic plotline, and left viewers in limbo. Not until 2011’s First Class did the franchise begin again in the right direction, focusing on strong characterizations thanks to stars McAvoy, Fassbender, and Lawrence. When Singer returned to the franchise with 2014’s Days of Future Past, he played with time travel to reset what Ratner had done, as well as everything that had come before. Granted, Hugh Jackman’s Wolverine still appears in every X-Title, but Apocalypse follows the same group of younger characters established in First Class.

The point is, following the story trajectory from 2000’s original X-Men to Apocalypse may require a complex diagram to understand. And that’s without considering spin-offs, like this year’s Deadpool and the underrated The Wolverine (2013). For the uninitiated, I would recommend First Class onward to grasp Apocalypse. Everything before the abysmal X-Men Origins: Wolverine (2009) feels unconnected, while everything after remains necessary viewing to appreciate this installment. The film opens with a prologue in ancient Egypt, where a mysterious being named En Sabah Nur, a god-like figure and supposedly the first mutant, undergoes a ritual that will render him immortal in a new body (Isaac). During the ceremony, he’s betrayed and buried under rubble for a few thousand years. Cut to 1983, when En Sabah Nur is inadvertently awakened by CIA agent Moira Mactaggert (Rose Byrne). No good ever comes from ancient royalty being roused from its centuries-long slumber.

The film reconnects with the franchise’s main staples in these early scenes, finding the shape-shifting Mystique (Lawrence)—a kind of mutant hero figure since the events in Days of Future Past—in Berlin, where she tries to free mutants from an underground fight club. Among them, she rescues Kurt Wagner, the teleporting blue guy nicknamed Nightcrawler (Kodi Smit-McPhee). We learn Magneto (Fassbender, excellent) has been hiding out in Poland, living a quiet life with a new spouse and child ever since he dropped a stadium atop the White House in Days of Future Past. Quite sympathetic and driven by rage over the cruelty of humans, Magneto once again finds reason to lash out. The reborn En Sabah Nur finds Magneto and promises him the capacity for worldwide revenge. The venerable, also blue, biomechanical villain wrangles three other “Horsemen” for his army: the weather-controlling Storm (Alexandra Shipp), the winged Angel (Ben Hardy), and the glowing-knifed Psylocke (Olivia Munn)—each character more disposable and under-written than the last. But then, En Sabah Nur doesn’t have a genius scheme. He wants to destroy everything and reign over the ruins.

Meanwhile, in New York, Professor X (McAvoy) has turned the Xavier Institute into a school instead of a secret HQ, believing the world will leave mutants alone. Hank, aka Beast (Nicholas Hoult), worries the mansion will be attacked and prepares by building war machines. The film’s rather superb first two-thirds explore the new versions of old characters, allowing the young actors to bring them to life: Tye Sheridan (Mud, Joe) adds layers to Cyclops, who struggles with his powers and gradually becomes a natural leader. Of course, he takes to the telekinetic telepath Jean Grey as well. Here, Game of Thrones’ Sophie Turner gives Jean the vulnerability and potential for unhinged power that fans have been waiting to see realized since X2 in 2003. Worried about Magneto’s return to the spotlight, Mystique returns to the mansion with Nightcrawler in tow, hoping for the Professor’s help. Not long after, En Sabah Nur and his newly formed Four Horsemen attack the mansion, kidnapping the Professor, and requiring the younglings to come to the rescue.

If there’s one characteristic that sets the X-Men franchise apart from the MCU, it’s how rarely the films remain true to the comics, both in their storylines and characters. Rather than capture the spirit of the characters on screen, the filmmakers often diverge and create their own, lesser mythology. For example, several characters in Apocalypse feel like nothing more than walking, talking mutant abilities, present only to fill the screen with more CGI-animated effects. Creating a unique filmic mythology for comic book characters is not in itself a bad thing. But, as suggested above, the X-Men films contain erratic and not-always-satisfying mythologies, often cramming as many characters into the proceedings as possible. Consider the so-called Four Horsemen, which, Magneto aside, just sort of perform their master’s bidding and have no personalities. What a shame, as Angel, Storm, and Psylocke have some of the most complex inner personalities of all the X-Men—in the comics, anyway. Onscreen, they’re no more developed than hired goons.

Another major downfall is Apocalypse. Isaac’s normally soft voice can’t quite manage the booming, almost unearthly presence of Apocalypse, who looks somewhat silly thanks to costumer Louise Mingenbach’s plastic-looking design (Mingenbach’s work on Jean’s shoulder pads, Nightcrawler’s “Thriller” jacket, and Mystique’s punk getup is far superior). Singer also overlays Isaac’s voice with a synthesized effect, making Apocalypse sound as if he found one of those cheap voice-changing speakers they used to sell in the ‘80s. Under a lot of practical make-up and occasional CGI embiggening, the character doesn’t feel real or particularly imposing, whereas Apocalypse was always the most dreaded comic villain in the X-Verse. He’s not a multi-dimensional villain here, either; not like Magneto or Loki. He’s a plot device to make other characters become more interesting.

Elsewhere, Simon Kinberg’s screenplay for Apocalypse—based on a story conceived by Singer, Kinberg, Michael Dougherty, and Dan Harris—seems too reliant on establishing Mystique as a hero and leader of the young X-Men. Being an avid X-Reader in my day, I find this troubling, and somewhat annoying, regardless of my own Jennifer Lawrence fandom. Clearly, the filmmakers want their two-time Oscar-winning actress to receive as much screen time as possible. But they’ve written Mystique into a heroic, Katniss Everdeen-esque character, complete with rallying battle speeches. If someone of Lawrence’s caliber wasn’t playing Mystique, one wonders if the character would have been written in another way, or omitted completely.

Fortunately, most of the two-hour-and-twenty-minute runtime is devoted to the young X-Men (Cyclops, Jean, Nightcrawler, Beast, and Mystique). But then, I haven’t yet mentioned the fast-running Quicksilver (Evan Peters), a motormouthed character who once again steals the show, this time with an impressive mansion rescue set to the Eurythmics’ “Sweet Dreams”. These most fully formed personalities are what maintain our interest in Apocalypse, whereas the villain feels present only to give these young characters something to do. Among the film’s best, most entertaining setpieces occurs when the youngsters are kidnapped and detained by Col. Willian Stryker (Josh Helman) at a top-secret Weapon X facility. Their escape allows them to unleash a familiar hero in a bloody (and damn bloody exciting) action sequence. Less exciting is the finale, where a lot of CGI, and En Sabah Nur’s synthesized voice, rule the screen, making for a shrug-worthy climax.

Scenes with the villain of X-Men: Apocalypse are serviceable and probably won’t bother most casual fans or moviegoers. The best moments of the film occur between McAvoy’s sensitive voice, Fassbender’s ability to communicate his character’s inner rage, Sheridan’s natural charm, Peters’ rambunctiousness, and especially Turner’s internal conflict and eventual authority. And while more attention should have been paid to the villains (which is a consistent issue among superhero films these days), the excellent reappearance of our beloved X-Men characters can’t help but garner our goodwill. X-Men: Apocalypse isn’t a great entry in the franchise, but there’s a lot of worthwhile material in the film. Perhaps best of all, it leaves us wanting more from these characters, no matter how lame the villain—had Singer’s efforts been a complete failure, I don’t believe that would be true. Indeed, the next installment with these young actors can’t come fast enough. But here’s hoping they write a more complex opponent for them to face off against.