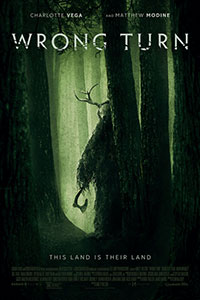 At a certain point in Wrong Turn, I had to pause the movie. It was getting too unpredictable—not the usual cannibal-hillbillies-stalk-yuppies fare I was prepared to see. Midway through, I could already tell the movie was capable, inspired, and wanted to say something. Instead of finishing the movie, I had to get my wife, who opted out of this remake initially after having little affection for the 2003 original. While she started from the beginning, I busied myself in another room; and once she had caught up to my stopping point, we resumed the movie together. Fortunately, the first half that had defied almost every expectation was followed by a second-half that was, we both agreed, equally unpredictable. The best horror movies deviate from the standard in compelling ways, making slight adjustments to the proven formula that push the genre forward. Wrong Turn innovates on its predecessors as though its screenwriter, Alan McElroy, who also wrote the original, mapped out his first script and, starting in the same basic place, resolved to choose every alternate path to the one he had taken before. It might be a self-conscious exercise in divergence; it might also be the most inventive horror remake in recent memory.

From the outset, Wrong Turn has several strikes against it. For starters, it’s a remake, and remakes hardly have a good track record. Though, the horror genre has produced many fine improvements the second time around, with John Carpenter’s The Thing (1982), David Cronenberg’s The Fly (1982), and Luca Guadagnino’s Suspiria (2018) standing as prime examples. Moreover, the original Wrong Turn wasn’t all that great to begin with; it was a product of 2000s horror in the worst ways. After the turn of the century and 9/11, horror movies became particularly nasty and nihilistic, delighting in extreme gore and torturous violence against what were usually despicable, empty characters the audience couldn’t wait to see torn apart. The first Wrong Turn followed a bunch of sexy white people into the Appalachian mountains. There, they were confronted by cannibalistic mutant inbred freaks—lumpy creations from Stan Winston’s creature shop—who proceeded to chop them to bits. Despite the thinly drawn victims and grisly situations, Wrong Turn, like the never-ending Saw series or Paranormal Activity franchise, spawned five subsequent direct-to-video entries.

Horror changed in the 2010s, exchanging the abrasive torture porn and mean-spirited slashers for filmmakers such as Jordan Peele and Ari Aster, who are interested in elevating the genre. While I won’t go so far as to compare the new Wrong Turn to the work by those auteurs, the treatment by director Mike P. Nelson takes a cue from recent horror that speaks to an audience interested in more than savagery and screaming. McElroy’s screenplay preys on the viewer’s prejudices, resolving to inhabit a moral gray area and challenge every assumption we make about nearly every character. At the same time, the movie takes one disturbing and freaky turn after another; the blood and guts run red, so gorehounds will be pleased. It might even risk turning into an experiment in toying with our expectations for unpredictability’s sake, except it also manages to have a cohesive thematic undercurrent. (With that in mind, it might be a good idea to stop reading, watch the movie, and come back to finish my review.)

From the outset, things are slightly different. Rather than a group of obnoxious youngsters in the woods, the movie opens with Scott (a gravitas-laden Matthew Modine), a concerned father looking for his missing daughter near the Virginia Appalachian Mountains. The locals aren’t much help and offer few clues to what might’ve happened to Scott’s daughter, Jen (Charlotte Vega), when she passed through town with friends. Nelson characterizes the town with confederate flags and unfriendlies, such as Nate (Tim DeZarn), who warns Scott to give up his search and leave the area. Cut to six weeks earlier, when Jen, her boyfriend Darius (Adain Bradley), and two other couples from New York enter town—what they loudly call “Bumfuck, Virginia”—where they’re immediately labeled “goddamn hipsters” for their attitudes, not to mention their interracial and queer couplings. In truth, the characters have more definition than their counterparts from the original, each of whom could only be described as a hottie. Here, the characters have ambitions, desires, and hangups, which is at least enough for a surface-level personality. By the end of the movie, we’ll feel the same about Nate, the seemingly one-note “redneck” who doesn’t like outsiders. 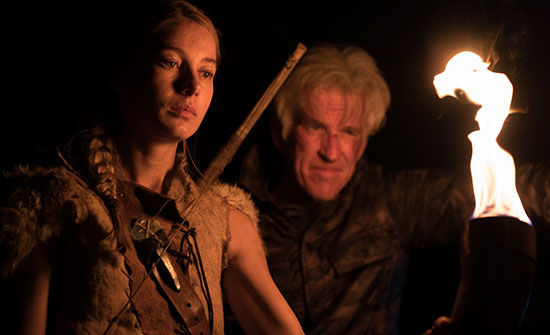 Almost instantly, we suspect they’re in trouble based on the heavy-breathing POV shots watching them from the woods. Then they ignore the warnings of the resident harbinger (Amy Warner), the operator of their bed and breakfast, who tells them to stay on the marked paths on the Appalachian Trail. “Those woods can be unforgiving,” she says. Inevitably, they dismiss her advice, and, sure enough, things get dangerous—starting with a deadly log, followed by a series of traps and strange shadows behind the trees. When one character remarks, “This is so fucked up,” he’s right, just not in the manner you would think. Instead of monstrous subhumans hunting people for sport, there’s a hill-people organization called The Foundation, which has remained hidden in the mountains since the 1850s, certain that America will destroy itself—at which point they’ll take over. Nelson reveals them in clever ways, implanting doubt and terror by using familiar shots of blood-spattered saws and piles of cell phones. Tom Elkins’ sly editing is essential in these moments, allowing the dark and coherent cinematography by Nick Junkersfeld to aptly service the story.

Upon learning of The Foundation’s presence, Jen’s group is certain they are “clearly not good people.” When Adam (Dylan McTee) disappears into a hole in the ground, the survivors retaliate, leading to a shocking confrontation. However, once the others enter the Foundation’s lair, we begin to question both sides’ motivations. The Foundation’s people set traps in the woods and wear animal-skull masks, but their leader (Bill Sage, winkingly cast given his role in 2013’s We Are What We Are) has reasons for all of this behavior that make us consider, initially anyway, whether their way of life doesn’t have some appeal. Everything we assume about an essentialist group living in the woods isn’t necessarily true, leaving the viewer with hints of Tucker and Dale vs. Evil (2010), a horror-comedy where the hillbillies are the good guys, and the yuppies perpetuate the onscreen violence. But even that proves too polarized for Nelson and McElroy, who aren’t so much making a sequel or even a reboot of their original movie but using that title as a clever gotcha device. Once the hook is set, they reel the viewer along, forcing us to question our presumptions and biases with a barrage of twists and turns. Only when the second climax takes a cue from the title, turning one too many times with a conceit worthy of Michael Haneke’s Funny Games, do the filmmakers press their luck.

Having no allusions about Wrong Turn’s prospects, my low expectations were surpassed. Maybe this review does you, the reader, a disservice by setting your expectations higher than mine were. That’s the last thing I want. Rather, I want you to watch this remake expecting a new take on the killer hillbilly subgenre and discover the rest for yourself. What you’ll find is a movie that is engaged in what is sometimes called metamodernism. We might consider the original film modernist and almost classical in its take on the killer hillbilly genre—a straightforward B-movie about monsters slaughtering yuppies. In that case, Tucker and Dale becomes a post-modern riff on the same idea, laden with ironic humor and references galore. Thus, the new movie should be celebrated for its balance of departures and re-engagement with the traditional, and how it uses those elements to remark on sociopolitical division and fear of otherness in America today. Although it bears no loyalty to the original series, which may upset some fans, that’s exactly why I find the movie so inspired.