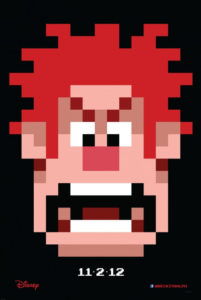 Taking a cue from both TRON and Toy Story, Walt Disney Animation Studios’ Wreck-It Ralph takes place in the world of video games, supposing that our favorite game characters have lives all their own when there’s no one around to play them. It comes as no wonder that the executive producer here is Pixar co-creator John Lasseter, having spearheaded Pixar’s movement into the arena of bringing life to inanimate objects. With an impeccably selected voice cast and a diversity of animation styles, the fictional video games on display in the film’s locale of Litwak’s Arcade—ranging from the titular 8-bit Donkey Kong riff, to an aggressive first-person shooter dubbed Hero’s Duty, to a go-cart racing trip through Candy Land in Sugar Rush—offer diverse settings and never become stagnant. Even if the protagonist follows a standard children’s movie model (think Despicable Me or Megamind) where the bad guy finds his inner hero, the film’s eventual juxtaposition of characters in settings not their own remains interesting and funny.

The film follows Wreck-It Ralph (voice of John C. Reilly), who serves as the villain in an early 1980s arcade game called Fix-It Felix, wherein hero Fix-It Felix Jr. (Jack McBrayer) and his magical hammer must repair the damage done to an apartment complex smashed by Ralph. From the outside, the film’s animators render gameplay in a classic style, everything boxy and digitized in a familiar way for those of us who played such games. When we go inside the game, the characters become three-dimensional constructions with jerky, pixelated movements. Every day, these characters go through their game routine with Felix fixing Ralph’s wrecking, but Ralph wants more. Every arcade console in Litwak’s Arcade is seemingly connected to the same power strip (which is unsafe, kids!), allowing the various video game characters to come together in Game Central Station. Here Ralph meets with his game villain support group, populated by the likes of King Koopa, M. Bison, Doctor Robotnik, and others. Ralph questions why he cannot be a hero too. “Because that would go against your code,” his group explains.

When he returns home, Ralph finds Felix and the apartment building’s tenants, called Nicelanders, celebrating their game’s 30-year anniversary without him. As much as Ralph wants to be the hero, complete with medals and acclaim, he wants to be accepted. Believing a medal for heroism will earn him approval from Felix and the Nicelanders, Ralph resolves to enter Hero’s Duty, a shooter where high-tech soldiers blast away cybernetic aliens for a gold decoration, and joins Sergeant Calhoun’s (Jane Lynch) platoon of Cy-Bug destroying grunts. His bungling inadvertently crash-lands him in Sugar Rush, where he meets a fellow outcast and “glitch” Vanellope von Schweetz (Sarah Silverman), an impetuous girl resolute on being her game’s next playable character by using Ralph’s medal to gain entry to the races. Ralph agrees to help her win, if only to retrieve his medal. Meanwhile, Sugar Rush’s resident kooky tyrant, King Candy (Alan Tudyk), wants to stifle Vanellope’s chances for conspiratorial reasons, as Calhoun and Felix team up to track down Ralph and the multiplying Cy-Bug he brought with him into Sugar Rush.

Director Rich Moore makes his feature debut after years of experience on animated TV shows such as The Simpsons, The Critic, and Futurama. He commands a film that requires the convergence of multiple character types, worlds, and animation styles all at once, keeping them, for the most part, consistent and differentiated. The meticulous detail applied to each separate video game’s world is impressive and exhaustive, yet also familiar to gamers. For the viewer’s ease, however, Ralph does not boast the same digitized movements as Felix or the Nicelanders. Also, when Felix jumps, there’s a quasi-Mario audio byte that transports older viewers back to the days of Nintendo. Such humorous effects do not accompany Ralph, who, being the film’s protagonist, is presented as normally as can be in a visual sense. Although an understandable choice for the audience’s sake, more devotion to the film’s diverse styles would have set the film apart creatively. Too, the film’s annoying inclusion of modern pop and electronica songs (from Rihanna, Buckner & Garcia, Skrillex, and Owl City) sound less like video game scores and more like Disney Channel marketing tools.

Nitpicks aside, this bubbly voice cast, led by Reilly’s energetic and hilarious work, makes Wreck-It Ralph something fun and nostalgic for gamers young and old, but the story is accessible enough that one does not need to be a gamer to benefit from its emotional turns. Silverman, McBrayer, and Lynch never quite disappear into their roles, their voices being so recognizable and their characters designed to look like the performers, but their particular voices are hilarious nonetheless, especially McBrayer. Tudyk is completely unrecognizable and hilariously dynamic, sounding similar to Ed Wynn’s Mad Hatter in Disney’s animated Alice in Wonderland (1951). Thanks no doubt to Lasseter’s influence, the film both makes us laugh and tugs on our heartstrings in the tender friendship that develops between Ralph and Vanellope. Phil Johnston and Jennifer Lee’s script finds sad, trapped, silly characters locked inside their programming and desperate to escape, and in these energetic and colorful settings, losing yourself in their struggle for freedom and acceptance is effortless.