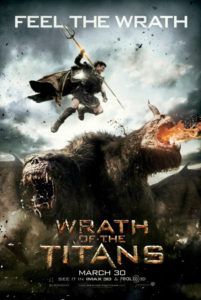 Made in the tradition of Hollywood factory film-making, Wrath of the Titans has everything you might expect from a blockbuster sequel. The plot of this follow-up to 2010’s Clash of the Titans is all but carbon-copied from the first to ensure that audiences won’t feel isolated by the threat of something new and unfamiliar. There are chummy references to events in the previous movie, just in case we’ve forgotten how “Unleash the Kraken!” provided Warner Bros. with their entire marketing campaign. The stakes are raised, and the scope is broadened, along with the budget. Because the characters, for the most part, have already been established, there’s more time for action. But the characters have changed ever so slightly to accommodate the actors, while some actors have not returned at all, and their parts have been entirely re-cast. There’s a sense that what happened before was just the rehearsal for the sequel. And, in true big-budget sequel tradition, every moment fails to live up to the original.

This isn’t to say that failing to live up to the 2010 movie results in a great disappointment—it was, after all, a mild catastrophe; but the sequel’s a bona fide disaster. Like most franchise sequels of this sort, money drives every decision. Clash of the Titans made something like $495 million in worldwide box-office receipts, with only a third of that coming from U.S. audiences. And since Warner Bros. lost its most bankable franchise with the final Harry Potter film last year, the studio is seeking every other viable franchise at its disposal to replace the roughly $1 billion-per-film J.K. Rowling’s series earned the studio. No matter how lackluster stateside viewers and critics found Clash of the Titans to be, rushing a sequel into production will no doubt earn the studio a hefty profit, not to mention a large payday for the talent involved.

Traced from the same narrative outline of its predecessor, the sequel follows Sam Worthington’s Perseus as he yet again flies about ancient Greece on winged Pegasus in hopes of finding the godly weapons he’ll need to defeat a roaring titan. In the first film, he collected a sword and reflective shield to first decapitate Medusa, and then use her head to kill the Kraken. This time, Perseus has been implored by Zeus (Liam Neeson) to stop the emergence of Kronos, the lava creature father of Zeus, Hades (Ralph Fiennes), and Poseidon (Danny Houston). People have stopped praying to the gods, and so the gods have become weak, leaving the walls of the titan prison Tartarus to slowly crumble. By recovering Zeus’s thunderbolt, Poseidon’s trident, and Hades’ staff, Perseus can form the same MacGuffin that originally allowed this trifecta of gods to take down their father thousands of years ago. Of course, Hades and his new cohort Ares (Édgar Ramírez, replacing comparative no-name Tamer Hassan), who have all sorts of mixed-up feelings about their brother/father Zeus, have plans to release Kronos and save themselves.

One gets the impression that Greg Berlanti (Green Lantern), who was credited with the story along with David Leslie Johnson (Red Riding Hood) and first-time writer Dan Mazeau, sat down and made a list of monsters from Greek mythology. From that list, they removed any of the creatures and titans that appeared in the first movie. Around the remaining list of mythical monsters, they formulated a scenario that closely follows the plot of the earlier movie. A two-headed Chimera falls from the sky and tests Perseus with its fire-breathing and snake tail; Perseus faces off against three giant Cyclopes; in the labyrinth to Tartarus, Perseus defeats the Minotaur (who looks conspicuously like Tim Curry’s devilish Darkness from Legend) in an all-too-brief encounter. Along with the smoldering, towering emergence of Kronos, most of these baddies are rendered with expensive-looking computer effects. But as the creatures keep coming, we wonder when anything onscreen will amount to something akin to a narrative. The entire scenario feels concocted as a vessel to carry Perseus from one mixed creature to the next.

Whereas Perseus fought out of hatred for the gods in the first movie, this time, he’s “saving the universe” to protect his son, Helius (John Bell). Turns out Helius’ mother, Io (formerly played by Gemma Arterton, who opted not to return for the sequel out of self-respect), died in some unnamed manner, leaving Perseus a single father. The presence of a child still doesn’t provide much immediate motivation, however, nor does Worthington permeate the mannerisms of a reluctant hero. Worthington’s performance is like many of his roles—a characterless do-gooder incapable of disguising his Australian accent during feats of heroism. Eventually, Perseus falls for fellow adventurer Andromeda (Rosamund Pyke), who has become a powerful warrior-queen between movies. And yet, somehow, whatever blood and dirt accumulate on Andromeda’s face during battle is always conspicuously absent a moment later, reminding us that though she’s a warrior, she’s also a woman who needs to be kissed.

Worse than the clichés or redundant monsters for Perseus to conquer, the writers attempt to infuse humor into the proceedings with cringe-worthy one-liners and two comic-relief characters. In the former category, when Perseus realizes a Cyclops is charging at him, he sighs and says, “You gotta be kiddin’ me.” With that kind of cornball dialogue, we almost expect Zeus to exclaim, “I’m too old for this shit!” But fortunately, that never happens. As for funny characters, early on, Perseus enlists a cohort in Poseidon’s roguish navigator son Agenor (Toby Kebbell, the real RocknRolla), and the character helps find Hephaestus (Bill Nighy), the god of craftsmanship. But after that, Agenor seems present only to make wisecracks. Even Nighy’s performance as Hephaestus is meant for laughs; the character is represented as a raving madman (of the funny sort) who talks to his imaginary friend Gollum-style. These half-hearted attempts to give an otherwise personality-deficient series a fun-loving adventure pitch fail at every turn, miserably so.

Back in 2011, Warner Bros. was so impressed with their early screenings of Battle Los Angeles—a miserable mash-up of Independence Day and Saving Private Ryan—that they gave relative newcomer Jonathan Liebesman directing duties on Wrath of the Titans. Shooting in a limited timeframe for this size a picture, Liebesman succeeds only in delivering another Hollywood movie with shaky and unintelligible action scenes that fail to showcase either the expensive CGI or grimy, colorless 3-D presentation. Why bother spending a massive budget on these frills if the camera doesn’t remain still enough to capture them? To be sure, there’s little to hold our interest visually or narrative-wise, and we can’t help but feel embarrassed for talented actors like Neeson and Fiennes and Nighy, who are all so much better than this. But, as stated at the beginning of this review, this is a product motivated solely by the studio’s financial gain. In those terms—and those terms only—this sequel will no doubt be a success.