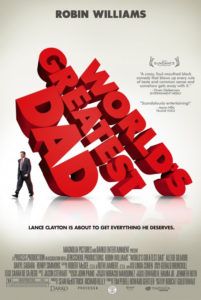 When you see comedian Bobcat Goldthwait’s name as the writer and director of World’s Greatest Dad, hopefully, that recalls the humanity his movies sometimes achieve through extremely graphic, raunchy, coarse situations. If it just brings to mind grotesqueries from Shakes the Clown or Sleeping Dogs Lie, Goldthwait’s previous efforts, or even induces unsettling flashbacks to the Police Academy movies, there’s no convincing you of the merits of his latest. It takes a particular kind of mind to appreciate a Bobcat Goldthwait movie, one that’s a little dark and depraved to begin with, but one also willing to explore their own comfort zone.

Unexpectedly, Lance’s son dies in such a way that, without giving too much away, might seem familiar to our post-David Carradine world. Lance, having never published any of his own writing, despite submitting several books and magazine articles to various agents over the years, takes it upon himself to write a suicide note for Kyle, making his son’s embarrassing accidental death look intentional and meaningful. The school suddenly takes notice of the late Kyle’s talent, believing that the kid to which they never paid any attention harbored some secret genius. Lance sees another opportunity to write and unveils Kyle’s hidden journal; he publishes it as a small tome of observations and inner feelings, all mostly his own but fronted as his son’s. Meanwhile, the school and beyond goes wild for Kyle, remembering him as a quiet saint instead of the angry pervert he was.

Goldthwait’s script contains some revealing truths about how people behave after a death, how everything terrible about the dead person is illogically washed away. Everyone in Lance’s school projects themselves onto Kyle: his jock enemies now say they were friends with him; girls suddenly always harbored secret fascinations with him, and everyone wants a piece of Kyle. Lance is the worst, making Kyle into a thinly veiled version of himself. Two girls fight over a Bruce Hornsby CD because Lance has told them it was Kyle’s favorite; in reality, it’s taken from Lance’s own collection. Consider the public’s reaction to Michael Jackson’s death, and the film’s observations become blatantly true. We always put the dead on a pedestal, forgiving their lesser qualities in favor of what we would’ve liked them to be, which ultimately is pure fantasy when compared to the ugly truth.

Mostly the film is a showcase for Williams, who manages to show his sensitive and comedic sides in one shot. It’s often just one or the other in movies like Good Will Hunting contrasted by Death to Smoochy, but like The Fisher King, here Williams is unleashed onto an introverted character who is set free by the death of someone close to him. It’s a cruel, sick joke on the part of Goldthwait, but also a hilarious one, and surprisingly affecting. Even amid references to “Autoerotic Asphyxiation” and “German Shyster Porn,” World’s Greatest Dad is more tender and heartfelt because of Williams’ performance. And when it’s all over, no matter how obscure the plot or demented the scenario, Goldthwait has constructed a welcomed little indie comedy of the unlikeliest kind.