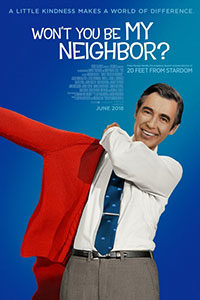 Documentarian Morgan Neville offers a heartwarming and truly inspiring showcase of Fred Rogers, who hosted the beloved PBS television series Mister Rogers’ Neighborhood from 1968 to 2001. An ordained Presbyterian minister, Rogers wrote, produced, and performed several puppet characters on his show, where he taught children about a myriad of alternatively simple and complicated subjects in a way a child’s mind could understand and disentangle. Arranged in a format that never changed over the decades, Rogers’ sense of calm and understanding helped children grasp the world and themselves, while affecting a message of love. Neville’s film, Won’t You Be My Neighbor?, considers the value of Rogers’ example, even while it ponders if, perhaps, in the long run, his message was lost on our present culture of mounting xenophobia and fanaticism. The film’s portrait may be simple and compassionate, but then so was Fred Rogers, a man who believed children deserved better television than what other entertainers were giving them, who explored big ideas using puppets and the Land of Make-Believe, and who made it his life’s mission to talk to children in terms they could understand.

Told through archival footages, clips from his show, and interviews with those close to Rogers, the film adopts an uncomplicated format. Occasional animated sequences, where Rogers is represented by a cartoon version of his sensitive character Daniel Tiger, reflect how the show’s host expressed himself. Each puppet character represented a different aspect of his personality. His desire for absolute control over his TV show was seen in King Friday XIII, while his anger could be found in the fearsome Lady Elaine. These were symbols that children could decipher, and he used them to talk about complex issues including war, death, divorce, and prejudice. At the same time, his show was unlike anything else on television. Consider a moment from an episode in which he wondered, “How long is a minute?”—and then proceeded to set an egg timer and allow that minute to unfold without a word. Not since Tarkovsky has someone so deliberately explored the nature of time onscreen.

His deliberate mannerisms and the dry inflection of his voice made Rogers a joke to some, a target for others. Everyone’s seen Eddie Murphy’s parody on SNL, but perhaps not those from SCTV and In Living Color. As it turns out, Rogers was bullied as a child. Children called him “Fat Freddy” and undoubtedly, along with a family life that was anchored by a perpetually angry father, the boy looked inward to explore his feelings through imagination. Rogers’ widow ponders whether he would have been the same man had “Fat Freddy” not existed. Maybe as a result of his childhood bullying, Rogers endeavored to stay fit as an adult. He swam every day and prided himself on maintaining a weight of 143 pounds for decades, which many of his friends and fellow artists found uncanny. The number 143 represented a curious numerology for Rogers, as the digits correlated with the number of letters in each word of the phrase “I love you”—making his weight a symbolic reflection of his self-appointed purpose and enduring message. 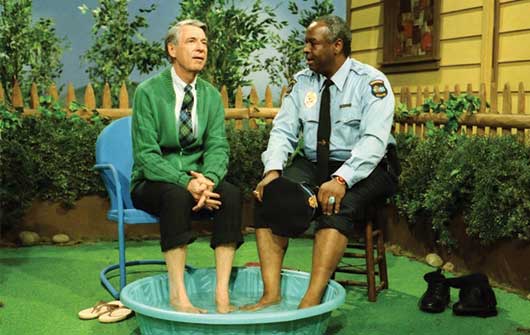 It’s possible to interpret Neville’s Won’t You Be My Neighbor? as a call to the right, which is currently descending into a heightened state of intolerance and bigotry. The film makes note that Rogers was a lifelong registered Republican and Christian. But he also believed the basic tenets of Christianity were rooted in love. His eternal message that every child was special was not designed to create a sense of entitlement, as many off-base commentators have supposed—one Fox News host absurdly remarked on Fox and Friends, “This evil, evil man has ruined a generation of kids.” Rogers felt that every human being deserves love, and should love themselves. Those who would claim that another person is not deserving of love, then, are not living in a Christian way, according to Rogers. He went on public television and addressed these edicts at another time in United States history when tolerance was not widely practiced.

In 1969, the same year that Rogers convinced the Nixon administration that PBS had an inherent value and deserved $20 million in government funding (one of the film’s best sequences), he made an episode of his show that seemed to acknowledge the country’s widespread racial segregation. Officer Clemmons, the neighborhood cop on Mister Rogers’ Neighborhood, appears in an episode where, on a hot day, Fred Rogers invites Clemmons, an African-American, to join him in cooling his feet in a small pool. The episode featured a white man sharing water and a towel with a black man, and therein calmly rebukes an ugly trend in American culture at the time of white people violently reacting against African-Americans using pools. Regardless of such steps forward, Rogers was not without flaws. The cop was played by Francois Clemmons, a gay man whom Rogers told to stay away from gay bars, for fear of ruining the show’s reputation. Later in the film, interviewees claim that Rogers finally came around on LGBTQ issues and rights, but these are just claims; the argument would have been more convincing if the words had come from Rogers’ mouth.

Neville’s film doesn’t reveal much about Fred Rogers’ personal life. What was it like to be married to Fred Rogers? What was he like away from the show? An allusion to his behavior behind-the-scenes with an “I could tell you stories”-like remark proves disappointing when no such stories are shared, aside from an anecdote about a rogue butt crack and some photographs (it’s much more innocent than that description implies). The large questions that remain leave Rogers something of a mystery, whereas Neville is quick to discredit ugly rumors and urban legends about him. Rogers was not gay, as Clemmons is quick to clarify. Nor was Rogers covered in tattoos. Nor did he serve in the military as an expert sharpshooter, as this critic once believed. Instead, Won’t You Be My Neighbor? concentrates on his message of love and understanding, and the limitless value of teaching children that message, that compelled Rogers to give up the seminary and pursue television in the first place. It’s a cherishable message that people today could use.