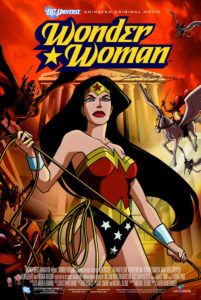 The first scenes of Wonder Woman, the new feature from Warner Bros. Animation, contain enough thematic material to inspire frantic confirmation of the rating. After the bloody, decapitation-laden prologue, you’ll no doubt pause the disc to verify that, indeed, it’s PG-13.  Geared toward comic book aficionados, the film seeks to tell an iconic story with appropriate scope, using its cartoon medium as a tool to unfasten the story from the constraints of a regular film. This means fleshing out believable characters, considering a classic superhero in a modern context, and formulating the narrative according to imagination, versus the budgetary constraints of a live-action Hollywood production.

Given the commercial and critical successes of Batman Begins and The Dark Knight, particularly the latter, Warner Bros. has sought to develop several projects based on DC Comics heroes, to which they own the rights: Superman Returns proved a failed relaunch, leaving audiences demanding a more actionized adaptation, as opposed to one desperately clinging to the Christopher Reeve films. Now the studio is accepting pitches on a potential revamp. Director George Miller attempted to get a Justice League film off the ground with a hip young cast, but fans recoiled at the thought of someone other than Christian Bale playing Batman; the project was postponed indefinitely. Further projects include Martin Campbell (Casino Royale) signing to direct Green Lantern, Jonah Hex starring Josh Brolin due in 2010, and several other live-action films rumored for release over the next few years.

And yet, how many of those will have the freedom and imagination and limitless possibility of an animated film? None. Some studio exec will always ask how much it’s going to cost to have Green Lantern fly through space, to depict Brainiac with motion-capture technology, to sign credible talent to the project. The people behind Wonder Woman have finances enough to show their Amazonian heroine lounging around her secluded Themyscira with no action whatsoever, or, they can have her fighting off an army of Greek undead—either way, it costs the same. That’s the beauty of the medium.

Rethinking the classic tale from Greek and comic book mythology, the film begins in ancient times as a battle rages between Queen Hippolyta (voice of Virginia Madsen), leader of the Amazons, and Ares, the god of war (voice of Alfred Molina). When the Amazons win, their reward is complete safety and serenity on their island paradise, hidden from the rest of the world. Meanwhile, Ares remains their prisoner in their care. You might question why being banished to an island is a victory prize. And there’s also the curious issue of how the Amazons reproduce, except the answer is they don’t, since they’re immortal. But why apply logic to mythology? (It’s later questioned how Leda was seduced by Zeus, who took the form of a swan to do so. If their world doesn’t make much sense even to them, why should we bother…?)

Cut to present day, long after Hippolyta births her daughter Diana (voice of Keri Russell) from the beach. Diana is now the Amazons’ greatest warrior. She longs for something other than Themyscira’s mountains and shores, which she’s explored to no end. She trains alongside the battle hungry Artemis (voice of Rosario Dawson), who yearns for the battles of yesterday. All at once, a modern jet crash lands, carrying American fighter pilot Steve Trevor (voice of Nathan Fillion). First, he thinks he’s in heaven, surrounded by gorgeous women alone on an island, but then he finds that each one fights with incredible power, and each harbors a general mistrust of men. Diana becomes the emissary to return Steve to his home in her invisible jet (don’t ask), finally donning her Wonder Woman garb for the task, complete with a Lasso of Truth and indestructible Vambraces. When she leaves Themyscira, however, Ares escapes, causing all sorts of trouble between the gods and humanity.

For years rumors have flooded the internet about a live-action Wonder Woman movie, with stars ranging from Jessica Biel to the “sexy” (quotes meaning tremendously overrated) Megan Fox attached. But after seeing this animated feature, you’ll agree that a live-action may not work, as it could render the hero into a mere sex object. Blame the skimpy costume that’s nothing more than a glorified bathing suit; a real-life actress couldn’t avoid the sexual implications of such an outfit. If live-action Wonder Woman is represented as a hottie, her feminist significance is canceled out. Unless you had a legitimate thing for Jessica Rabbit, animation removes the sexual element of a scantily clad woman kicking butt, and places our attention on the more inspirational qualities of her character. This is yet another wonderful benefit of the animation process.

Packed with humor and plenty of discussions on sexual politics and feminism, the film progresses with an affable sense of its characters. Fillion adds wry personality to an otherwise flaccid entry point into the contemporary, and Russell, despite her un-superhero-like appearance in the flesh, lends an impressive tone of boldness with her voice role. The entire cast disappears into their characters, so we’re less concerned about the celebrity behind the voice and more concerned with the story. During the end credits you’ll think back to the greatness of Oliver Platt’s slippery Hades, but during the film, it’s just Hades, no Platt. This wouldn’t have been the case with your Brad Pitts or Angelina Jolies, whose voices simply wouldn’t dissolve into their roles. Leave it to longtime voice casting director Andrea Romano, who finds actors to match their characters; without her, odd-but-brilliant choices like Mark Hamill as the Joker would have never been possible.

Last year, Warner Bros. Animation brought us the wonderfully stylized Justice League: The New Frontier, the mediocre Superman: Doomsday, and the over-stylized Batman: Gotham Knight.  But before that, the same group collaborated on animated series for Justice League, Superman, and of course, Batman. These are creative artists and bold conceptualists who realize that animation has no limits. Having begun in the early 1990s with Batman: The Animated Series and its theatrical movie Mask of the Phantasm, the square-jawed, geometric style of their figures still remains. Their animated universe has created the archetype from which subsequent comics and films carrying the DC Comics label have drawn influence.

Wonder Woman furthers the canon of reinvention founded by Bruce Timm, Alan Burnett, and Paul Dini. Lauren Montgomery directs their film in their originated style, keeping up the energy and scale of their projects without sacrificing the nature of the characters. Her work boasts well for the upcoming Green Lantern: First Flight, due later in 2009. And her film’s success should have fans clamoring for full-length, direct-to-DVD features for Flash, Hawkgirl, Martian Manhunter, Green Arrow, and other heroes. With any luck, those are on their way in the coming years…