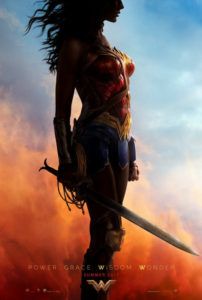 In their ongoing attempt to ape what the Marvel Cinematic Universe has achieved in superhero crossovers, Warner Bros. Pictures has rushed their DC Extended Universe and made some underwhelming blockbusters: Zack Snyder’s Man of Steel (2013) removed the joy and pluck from Superman, delivering a dour experience informed by Christopher Nolan’s Dark Knight Trilogy; Snyder’s Batman v Superman: Dawn of Justice (2016) existed as mere setup, introducing more dour heroes and unintelligible plot elements; and speaking of unintelligible nonsense, David Ayer’s hectic Suicide Squad (2016) was a familiar yarn (think Guardians of the Galaxy meets Deadpool) about good-bad guys who nonetheless end up saving the world. With Wonder Woman, the fourth entry in this universe, Warner Bros. finally offers a DC Comics superhero film worthy of its hero’s iconography. Skeptical viewers will be relieved to learn that, unlike Snyder’s conception for the DCEU, Wonder Woman features an optimistic, brave, compassionate, and relatively well-adjusted character—a refreshing change of pace from the moody bunch that preceded her.

Even better, the film seems to be the right film at the right time; it will undoubtedly incite plenty of extratextual discussion about feminism and politics. Though it follows a basic narrative structure audiences are accustomed to, the film marks a rare occasion where a large-scale production invests in a story mostly about women. Wonder Woman first appeared in the pages of All Star Comics in 1941. Psychologist William Moulton Marston and artist Harry G. Peter created her, intending to inspire young women with a strong feminist hero. A demigoddess and Amazonian, Princess Diana of Themyscira’s strength and power equal those of Superman, while her signature Lasso of Truth comes from Marston, who, as an inventor, also helped fashion an early lie detector machine. Despite the character’s intentions, Wonder Woman soon became relegated to lesser heroics, eventually turning into a full-fledged sex symbol by the time Lynda Carter played her on the 1975-1979 television show. Meanwhile, Hollywood has tried and failed for years to develop several television and feature film adaptations—from directors like Ivan Reitman and Joss Whedon helming performers like Sandra Bullock and Megan Fox. Also, Warner Bros. Animation succeeded in a feature-length animated film called Wonder Woman in 2009, which is fantastic.

In the first feature film of Wonder Woman, Israeli actress Gal Gadot stars as Diana, reprising her underdeveloped role from Dawn of Justice, except with an elevated degree of ethos here. Patty Jenkins (Monster) directs Allan Heinberg’s script that places Diana, and the Amazonian culture itself, at the center, making everything outside of that fascinating world seem strange. Where Jenkins excels are the more human sections in the first two acts, particularly in the opening scenes inside Themyscira. A richly conceived cityscape informed by Greek architecture, the island paradise is populated by warrior women with a strong bond between them, and headed by Queen Hippolyta (Connie Nielsen), Diana’s mother. Early on, the young Diana wants to learn about the art of war from her aunt, Antiope (Robin Wright, superb, inspiring, onscreen far too little). She eventually grows into a hero fated to duel with her sworn nemesis, the war god Ares. Getting to experience Themyscira may be Wonder Woman‘s finest treasure; it’s a fully-conceived world that seems to revolve around Diana in ways she does not understand. All the while, Gadot demonstrates her talent when given more to do in her role. 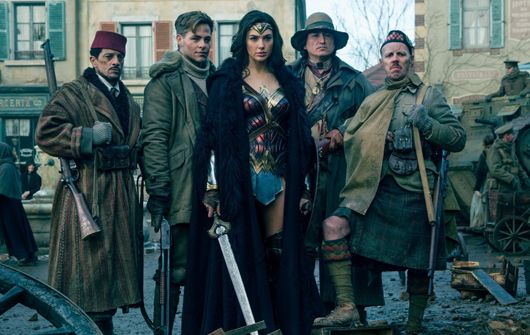 The second act follows Diana and Captain Steve Trevor (Chris Pine, excellent), a World War I spy for the British army whose plane crashes near Themyscira, searching for the film’s bad guy through the war-torn European landscape. Romantic and comic chemistry develops between them, such as when Diana informs Steve that her culture views men as unnecessary for sexual pleasure; at this and other moments, Pine’s charm and surprised expressions keep the material relatable. Joined by a trio of cohorts (Ewen Bremner, Said Taghmaoui, Eugene Brave Rock) resembling Captain America’s Howling Commandos, Diana and Steve brave the trenches, consecrate their romance and provide the emotional fodder needed later on. Given the surplus of supporting characters, these scenes border on placing Diana out of focus. As she rips through Germans, ricocheting bullets and blocking them with her shield, Steve and the others look on in disbelief and almost take precedence over Diana in the process.

For the larger set-pieces, Jenkins uses a film grammar not dissimilar from Snyder’s, with slow-downs and speed-ups during the action, corny-looking explosions, and an overblown third act teeming with too much CGI. The film’s villains include a dastardly German officer (Danny Huston) and his facially mangled cohort Dr. Poison (Elena Anaya). Together, they plot to keep the war going by unleashing a deadly new gas on an armistice summit. By the final battle in which Diana and an armored Ares throw CGI debris, tanks, and random energies at one another, the viewer stops caring that these heroes and villains’ powers are never satisfactorily explained. “I’m fighting for love,” announces Diana. “Then I will destroy you!” replies Ares. Fortunately, mind-numbing dialogue such as this doesn’t spoil the character development and goodwill established in the previous two hours. Still, it reminds us that Wonder Woman does indeed hail from lesser superhero cinema.

Regardless, there’s plenty to savor. Diana’s integration into then-contemporary London plays, quite delightfully, like scenes from Elf (when Buddy becomes distracted by cotton balls and revolving doors), as our hero asks questions inappropriate in a male-dominated society and must learn, but never accept, the etiquette of the day. Even so, when Diana’s entry into a British war room is met with guffaws from walrus-mustachioed Col. Blimps, the sexism then and now becomes apparent. These moments might almost be funny if they weren’t so frustrating for someone of her power and intelligence (she’s very well-read, speaks dozens of languages, and is generally the bee’s knees). The most appealing quality about Wonder Woman is how, despite its banal devotion to superhero tropes and third-act bloat, it has managed to awaken germane discussions for today’s sociopolitical climate. Whether it’s drawing attention to the underrepresented presence of women in cinema in front of and behind the camera, the generally marginalized status of women today, or even the relevance of female-only screenings (and the anger such showings bring some mal-adjusted people), Wonder Woman may finally etch a place in viewers’ minds for its symbolic significance and ability to create discussion, which can only be healthy.

Of course, this assigns a lofty (perhaps misplaced) degree of import to a comic book film that perhaps does not have such grand significance within the film’s narrative. From a certain point of view, Wonder Woman could be seen as nothing more than the DCEU’s version of Captain America: The First Avenger—a commercial bid for competition and further establishment of the Justice League franchise (“The Future of Justice Begins with Her” reads the film’s tagline, even though Justice already had a Dawn). After all, both scenarios involve past wars, lovers lost, larger-than-life villains, and ultimately prove to be nothing more than a puzzle piece into the forthcoming crossover. Admittedly, if Wonder Woman‘s connective tissues to the surrounding DCEU were not clinging to lesser material, the outcome as a whole might be worthy of more enthusiasm. And getting excited about another character mashup, Justice League, later this year seems much less compelling than another stand-alone film for Gadot’s Wonder Woman, Jenkins’ considerate direction, and a possible return to Themyscira. All that aside, Wonder Woman proves to be an important film for developing other female-centric intellectual properties and female audiences who finally have a noble hero to admire.