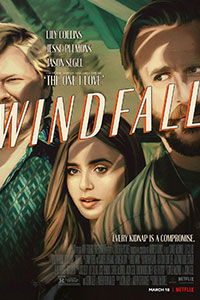 Crises tend to grind down on our pretenses, exposing our true natures. Take a scene in the 1997 movie The Edge when, stranded in the wilderness and stalked by a bloodthirsty grizzly bear, Alec Baldwin’s otherwise smarmy and arrogant photographer loses his composure. Panicking, he snaps at Anthony Hopkins, a wealthy billionaire whose coolheadedness Baldwin resents: “You moneyed folks… Get you in an emergency, and you bloom. You make me sick!” Indeed, Hopkins’ character puts his bookish smarts into practice and survives the ordeal, his wits intact. Unfortunately, the tech “super disruptor” billionaire in Netflix’s Windfall cannot say the same. Played by Jesse Plemons, he’s self-important, cowardly, classist, and has a way of insulting the other two characters in backhanded ways. When faced with a crisis, his worst tendencies are amplified, resulting in a lively performance from the otherwise reserved actor.

Shot in Okai, California, under COVID-19 restrictions in 2021, Windfall is a single-location drama written by Andrew Kevin Walker (Se7en) and Justin Lader. The minimal cast and crew have close ties, making the production feel like a passion project conceived and executed among friends and close collaborators as something to keep them busy during the pandemic. For instance, director Charlie McDowell previously worked with Lader on The One I Love (2014) and The Discovery (2017), the latter of which starred Jason Segel, who receives a shared “Story by” credit here. Segel costars alongside Lily Collins, who is married to McDowell. Each of the main actors in this three-hander also receives a producer credit. Given its small scale, the limited cast of characters, and the tight-knit team behind it, Windfall feels like a film born out of the necessity for creatives to create.

Segel plays a scruffy man credited as “Nobody” who, in the first scenes, wanders an isolated property lined with orange trees and lavish interiors. Poking around the house like he owns the place, it quickly becomes apparent he does not when the owners, the CEO (Plemons) and his Wife (Collins), arrive home and discover Segel inside. What unfolds is a low-key hostage situation in which the homeowners try to negotiate for themselves, going so far as to help Segel’s character navigate the practicalities of disappearing after releasing them. Segel asks for $150K in cash before he leaves, but they laugh off the suggestion—he could never hope to start a new life for that amount. He should ask for $500K of their money. At the same time, it’s evident he’s not interested in doing them harm. So why is he there? The screenplay snakes around the topic, alluding to the source of the CEO’s riches: an algorithm that helps companies downsize their workforce and increase revenues. Doubtless, Segel’s character was laid off and has come to prove something. What he hoped to accomplish in their house isn’t ever adequately explained.

In the film’s titles and stylistic restraint, there’s an old-fashioned approach to Windfall that Netflix describes as a “Hitchcockian thriller,” which feels ill-applied. Aside from the chamber drama setup that might recall the Master of Suspense’s Rope (1948), only the score by Danny Bensi and Saunder Jurriaans creates a feeling of dread. The music harmonizes with the location’s solitude and implants the idea that something terrible will happen. However, this slow-burning film never entirely pays off in the manner of Hitchcock. Instead, it reminded me of Harold Pinter’s screenplay of Sleuth (2007), where confined opponents use insinuation and weaponize microaggressions to take each other apart. Each of the three central performances (Omar Leyva joins later as a gardener) lends their character two dimensions, at most, leaving the film’s conflict with a disappointing lack of twists, turns, and reversals. Although Collins has the most significant dramatic journey, Plemons has the showiest role, while Segel’s range goes unexplored.

Even though Windfall looks and plays like many recent pandemic movies, the story and execution align with McDowell’s The One I Love, another film about a couple whose retreat is interrupted by an unexpected guest. Unlike that film, Windfall’s setup doesn’t feel strange or all that involving. Segel’s impromptu kidnapper never seems dangerous, and it’s anyone’s guess why the CEO and his wife play along. “Why do we keep pretending this guy is an actual threat?” asks Plemons. It’s a question the viewer will ask themselves, again and again, thus rendering that “Hitchcockian” adjective false for the film’s utter lack of suspense. If the trio of well-known actors distracts with low-key entertainment value for the film’s brief 92-minute runtime, none of it manages to hold much weight after Netflix loads the next chunk of content from their own algorithm.

(Note: This review was suggested by the DFR community on Patreon.)