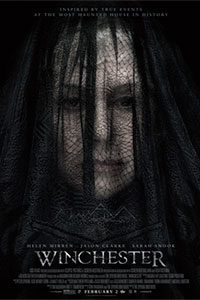 Haunted house fanatics and reality TV ghosthunters are undoubtedly familiar with the “Winchester Mystery House,” a tourist attraction in San Jose, California, built by Sarah Winchester, whose husband William launched the Winchester Repeating Arms Company in 1866. Filled with doors that open to walls, a séance room, and secret passageways, the Victorian-style mansion was the product of a spiritualist grieving over the loss of her husband and infant child. She tried to build enough rooms for all those souls who lost their lives to the rifles in her namesake, hiring workers to construct, tear down, and reconstruct her house day and night, around the clock for decades. She kept this up until her death in 1922, when the seven-story house contained 100 rooms, and the conspicuous pattern of the number 13 figured into the design.

The factual basis of the Widow Winchester’s house has all the makings of a compelling Gothic horror story. But when the words “Inspired by True Events” appear onscreen before Winchester, the viewer should approach such claims with caution. Rather than exploit the strange and rather sad truth of Sarah Winchester, the movie, directed by the Australian siblings Michael and Peter Spierig (Daybreakers), follows every precept of a standardized supernatural horror yarn. Most of the 98-minute runtime consists of its characters searching out sounds of unknown origin in the dark, only to have their curiosity met with a cheap jump-scare. Dark. Sound. Jump-scare. Over and over. That not one, but two of those jump-scares occur because of a rogue roller skate only makes the proceedings unintentionally funny. Indeed, Ms. Winchester, here played by Helen Mirren in a role beneath her talent, sought to bring joy to the masses by enabling them to travel on shoe-wheels.

Written by the Spierigs and Tom Vaughan, Winchester has a Screenwriting 101 structure, where every detail introduced predictably aligns with a later development. The story opens in 1906 in San Francisco. Dr. Eric Price (Jason Clarke) waxes philosophical about the nature of fear, how it comes from within, how he has a firm grasp on reality, and how he only believes in what he can see—characteristics bound to be tested in the remaining 90 minutes. A laudanum addict following the suicide of his wife, Price is prone to hallucinations and mumbling to himself about “It’s all in your head” and “I’m a fraud.” Despite his substance abuse, he’s commissioned by Ms. Winchester, on behalf of her company, to give her a psychological evaluation given her erratic behavior concerning her home. “For the appropriate assessment” the minority owners of her company offer to pay off Prince’s considerable debts.

Price learns that Ms. Winchester’s niece (Sarah Snook, from the Spierig’s Predestination), and her son Henry (Finn Scicluna-O’Prey), also live in the house—a drafty place engulfed in the sound of constant hammering, but also a spiritual hub, where the victims of Winchester rifle violence come to find peace. He may be there to interview and establish Ms. Winchester’s mental state, but much of the movie involves Price wandering around at night to locate bizarre sounds, every footstep creaking the wooden floorboards. He finds only jump-scares—the faces of decaying ghosts and, of course, roller skates that zip across the floor, seemingly on their own. He spends so much time seeking out noises in the night that we cannot help but wonder what he does during the day. Of course, there are grandiose reasons that Ms. Winchester chose Price to visit her home, but none of them have their intended import.

Mirren and Clarke’s talent aside, the screenplay feeds the two actors embarrassingly bad dialogue. When Ms. Winchester discovers that her niece’s son has been possessed by the resident unruly spirit, she announces “Oh God. It can take over minds!”—as if she expected as much. Even after the viewer has seen the maligned ghosts that Ms. Winchester speaks of, Mirren’s line readings somehow make the character sound like a crackpot. Perhaps Mirren just needed a payday, but her presence in Winchester makes the experience worse, since the viewer knows she’s capable of greatness, just not here. Clarke and Snook are also wasted on the script’s cornball dialogue.

Somewhere in the movie is an anti-gun message. But then, by the nonsensical climax, the viewer would be lucky to understand the surface text, much less the subtext. Remember that the story takes place near San Francisco, 1906, the year of the devastating earthquake. However, the filmmakers do such a poor job of connecting the  story to this event that, when the house begins to shake and crumble in a scene involving multiple angry specters, the viewer just assumes it’s because the ghosts have decided to shake its foundation (think Poltergeist). The issue is never brought up again, when all it would have taken is a construction worker to inform everyone, “Have you heard? The quake hit everyone in the city!” Only after a postscript is the connection made between the house shaking and the famous quake, and even then, it’s not explicit.

Winchester makes poor use of the weird, real-life lore behind the Winchester Mystery House. The movie resolves to check every box of a modern supernatural horror flick, and through that, the surprisingly talented cast doesn’t have much to do. Shot in muddy period colors and faux-looking natural light by cinematographer Ben Nott, it commits the crime of taking an idea full of crazed, M.C. Escher-level imagination and turning it into something unexceptional, complete with CGI ghosts and a silly, overblown denouement. The Spierigs remain talented filmmakers, but along with last year’s Jigsaw, the brothers have adopted a banal conventionality that has stained their work. Here’s hoping they get back to what they’re good at, as demonstrated in their innovative early work, by finding new ways to explore old genres. There’s nothing new or innovative about Winchester.