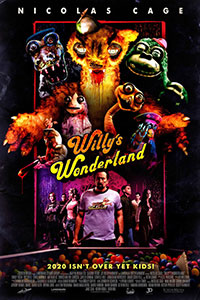 Willy’s Wonderland belongs to a subgenre of movies with loglines like “Nicolas Cage fights a satanic cult with chainsaws” or “Nicolas Cage fights monsters from a fallen meteorite.” His presence sells such fare, elevating these B-movie setups into cherished objects of cult fascination. Cage’s career, while still in the rampant paycheck-cashing mode that began in the 2010s, has found an audience at once amused by and enamored with the Oscar-winning actor turned ironically over-the-top cult icon. His latest effort, produced in part by Cage’s Saturn Films, could be described as “Nicolas Cage fights possessed animatronic puppets.” However promising that setup may sound to Cage enthusiasts, the shoddy delivery and underwritten script rob the viewer of a gleefully gory good time, leaving one pining for the days of Leaving Las Vegas (1995) and Adaptation. (2002).

Admittedly, I enjoy stuff like Mandy and Color Out of Space due in part to Cage’s out-there choices as an actor, but also because their filmmakers have obvious talent. Willy’s Wonderland was directed by Kevin Lewis, helmer of several low-budget and direct-to-video titles that you probably passed by on the shelves of Blockbuster. I mention that defunct video rental store for two reasons: 1) Lewis hasn’t directed since 2007, when Blockbuster was still around, and 2) his latest movie plays like something from the early 2000s. Indeed, this is a horror movie populated by mostly detestable characters whom we cannot wait to see turned into mincemeat, a 2000s-era horror trend that I was happy to see disappear.

Of course, Cage remains one of the only characters worthy of our investment, even if there’s not much to his character. Cage plays an unnamed role credited as The Janitor, a completely wordless drifter in a shining muscle car and a beard freshly combed with Just for Men. Driving through the small town of Hayesville, Nevada, he’s halted when a spike strip flattens his tires. Conveniently, a tow-truck driver (Chris Warner), constantly gnawing on a beef stick the way some chew on a cigar, arrives to provide assistance. But it’s all part of an orchestrated scheme by the townsfolk, headed by local magnate Tex Macadoo (Ric Reitz) and Sheriff Lund (Beth Grant), to snare would-be passers-by in a deadly web. The town’s auto shop is supposedly a cash-only business and won’t take Cage’s credit card. So to pay for the car’s repairs, Cage must spend the night cleaning a local rundown family spot called Willy’s Wonderland—a veritable 1980s-era Chuck E. Cheese or Circus Pizza complete with pinball, a “Super Happy Fun Room,” and animatronic puppet performers.

The catch: the robots are possessed by the spirits of satanic serial killers, and the complicit locals keep their bloodlust at bay by trapping unsuspecting victims inside the titular funhouse. Cage’s character enters willingly, ignoring how the words “Kid Killers” and “Gateway to Hell” have been scrawled in graffiti on the building’s exterior. You see, he’s on a mission, first to clean the interior top to bottom in long, elaborate spray-and-wash montages; then, he confronts the satanic robots in bloody fight sequences. In between, he takes scheduled breaks, announced by the timer on his wristwatch. Soaked in animatronic puppet blood from his latest encounter, at each break he changes his Willy’s Wonderland t-shirt, cracks a can of generic “pop,” and enjoys a few rounds of pinball. After fifteen minutes pass, he’s back at it, cleaning up the filth and mopping the floor with murderous mascots. Though, it’s unclear what happens if The Janitor misses a break.

Watching a dialogue-less Cage take on possessed totems isn’t enough for a feature, and so the filmmakers inject a group of local teens intent on burning Willy’s Wonderland to the ground. Inevitably, they find themselves locked inside, if only so the movie can increase the body count. Led by Liv (Emily Tosta), who was orphaned by the animatronics years earlier, the bickering and abrasive teens immediately make a series of stupid decisions: they decide to split up, have sex, or venture into strobe-light-lit rooms—all choices that any sane or self-aware person would avoid. But these are badly written teens in a horror movie, so they’re propelled into situations that will get them slaughtered.

Fortunately, most of the practical special FX look convincing enough, if decidedly amateurish. There’s an actor-in-a-suit quality to the robot characters who have names like Gus Gorilla and Tito Turtle, which look and move like performers at an unscary haunted house. When the production uses CGI, however, the result is unintentionally funny (note a rooftop set with a green screen backdrop that recalls the one used in 2003’s The Room). More impressive are the production and set designs, which render a convincing interior strewn with dim lighting, bright colors, and cartoon posters—the kind of place that, not unlike a movie theater, reveals its dirt, grime, and cheapness under harsh overhead lights. Lewis and cinematographer David Newbert also employ wide-angle lenses and a digital glare effect meant to disorient the viewer, but they’re mostly just distracting.

Even though the basic setup of Willy’s Wonderland should result in curbed enthusiasm, I was looking forward to seeing something like one of Cage’s better recent efforts. It’s the kind of movie you plan to enjoy on pizza night and unwind, laughing along with the tongue-in-cheek scenario. Alas, aside from the occasional inspired moment of Cage playing pinball or unloading rage on Ozzie Ostrich, there’s not much to savor here. It’s a neat idea that never takes off beyond the concept stage, leaving you with a sense that the screenplay needed another draft and characters needed some development. It attempts to present Cage’s Janitor as mythical and cool, mysterious and badass, but instead, the result is underwhelming even with the lowest of expectations.