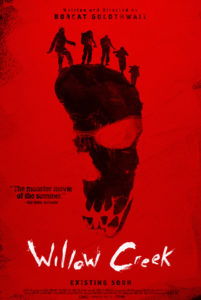 With Willow Creek, Bobcat Goldthwait delivers the most Blair Witch Project-esque “found footage” horror movie to reach screens in years. On the pretense of following two presumably dead amateur documentarians into Pacific Northwest woodlands to find evidence of Bigfoot, Goldthwait expertly handles a minimalist, independently financed production. Without the unbelievable, CGI-enhanced thrills of the Paranormal Activity series or zombie escapades of the [Rec.] titles, the comedian turned writer-director explores creepy interviews, unstable camerawork, and unseen sounds in the night. And much like The Blair Witch Project, the ending is abrupt and unsatisfactory, but the experience is one you’ll not soon forget.

It’s a strange turn for Goldthwait, whose directorial efforts up to this point have centered on morbid comedies with often controversial subject matter. His debut Shakes the Clown (1991), centered on a drunken children’s party entertainer who’s framed for murder. Sleeping Dogs Lie (1996) is about a woman who confesses to her boyfriend that she once experimented with bestiality. World’s Greatest Dad (2009), featuring one of Robin Williams’ last great performances, concerns a father whose son dies of autoerotic asphyxiation, and so he decides to publish a fake journal in his son’s name to make the boy a local hero. And God Bless America (2011) follows two social vigilantes as they travel across the country and deliver bloody justice to people who watch reality TV. So saying a true-to-form “found footage” movie is outside of Goldthwait’s wheelhouse isn’t a stretch.

The film follows a young couple, Jim (Bryce Johnson) and Kelly (Alexie Gilmore, looking very much like a young Sigourney Weaver), on what Sasquatch enthusiast Jim considers a romantic weekend to the woods. In his own inexpert way, Jim hosts and Kelly records a homemade doc about the myths and locations around where the famous Patterson-Gimlin footage of Bigfoot was captured in 1967. Kelly doesn’t believe in Bigfoot; however, Jim’s passion for the subject is silly to her, but she’s a good enough sport to tag along. They tour the local towns, which are teeming with kitschy Bigfoot signs, murals of Sasquatches interacting with humans, wood-carved statues, Bigfoot burgers, and crackpots who warn the couple to turn back and not proceed to the Patterson-Gimlin site deep in the forest. Along the way, they poke fun at the tourist trade, and all the while, we suspect these city folk will receive their comeuppance.

Once they arrive on the isolated trail to the Patterson-Gimlin site, they’re greeted by an intimidating local who issues an aggressive warning not to proceed. That doesn’t stop Jim, who’s determined to see where Patterson-Gimlin originally captured footage of a “female Bigfoot” striding away across a stream. As they camp overnight, Goldthwait’s devotion to the subgenre shines in a tense, 19-minute shot where the two are woken up in the night by unsettling sounds—knocking, groaning, and footsteps crunching sticks on the forest floor. Almost nothing happens in this one-fifth of the movie, but we watch intently as the characters sit and listen. The sequence is ingenious filmmaking, utterly terrifying, and justifies the whole movie’s existence.

Indeed, Willow Creek soon devolves into a shaky mess in the final shots, allowing our active imaginations to fill in the blanks for creatures we never see onscreen. Of course, as most “found footage” movies require, the ending is chilling, rushed, and ultimately a letdown. But the journey there creates a believable coupling between Jim and Kelly, with just enough character development that we feel both involved in their relationship and frightened for them when things get scary. Although not original, and certainly conforming to a series of tropes established countless times before in the past two decades, Goldthwait’s film delivers a technically sound and memorable exercise into established territory.