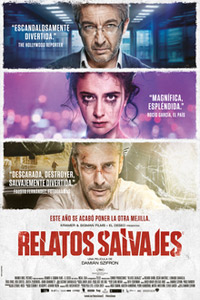 Argentinian writer and director Damián Szifrón opens Wild Tales with a disturbingly funny, almost anecdotal opener to his anthology. A model named Isabel (María Marull) boards a plane and encounters another passenger, Salgado (Dario Grandinetti), a music critic. After some chit-chat across the aisle, she realizes the critic once eviscerated the work of her ex-boyfriend, who remains unseen. Another passenger can’t help overhearing the coincidence, confessing that she, too, knows Isabel’s ex and taught him in grammar school. Others come forward, and soon everyone on the plane realizes they have the same man in common. The story takes place in a few precise shots, like a well-crafted joke. And as the situation comes to a shocking halt, the viewer realizes that, even if the six darkly comic stories are not interconnected, they will, at the very least, be made with skill and composed with a sharp sense of humor. It’s as though Szifrón has explored our deepest and most morbid fantasies about revenge and social retaliation, and in doing so, he has made something relatable, even if we’re embarrassed to admit it. Not every story will resonate, and the overall theme doesn’t leave one with a sense of their combined profundity, but three or four stories are bound to feel familiar and thus deliciously watchable.

Whether he’s critiquing corrupt politicians and the super-rich, or he’s tapping into something more primal like people acting on urges that should be stifled, Szifrón adopts a style reminiscent of Spanish surrealist Luis Buñuel, most notably that of The Discreet Charm of the Bourgeoisie (1972) or The Phantom of Liberty (1974). The vignettes here unfold without titles, just a fade to black to denote the transition from one story to the next (although titles for each segment appear in the end credits). They’re each cruelly comic and spare no one, regardless of gender, class, or station, although there’s a sense of personal justice driving each tale. The second story follows a mistreated waitress who reluctantly takes revenge on a customer, a criminal-turned-political-candidate. The third segment involves two road-ragers confronting each other to bitter extremes. Number four centers on a demolitions expert who grows frustrated with bureaucratic systems of government and decides to act out, recalling the trajectory of Falling Down (1993). Part five features a rich man who tries to buy his son out of trouble after a fatal hit-and-run, only to be confronted by slimy opportunists. And the final story is about a wedding reception that goes horribly wrong.

Each story asks questions of morality and social responsibility, while they also consider what happens when systems of order break down and human emotions are stretched to their limit. The opening credits sequence hints at the intended theme. The names of the cast and crew alternate with a series of animal stock photos. Each beast evokes an instant association as a symbol. Amidst images of hungry-looking big cats and sharp-eyed birds of prey is the picture of a frightened lamb, and the kill-or-be-killed implication becomes clear enough: Humanity is just as ruthless as the animal kingdom in its Darwinian hierarchy. Throughout Szifrón’s stories, the strongest survive and the weak meet cruel ends, and sometimes both parties end up in a bloody mess. More to the point, any notion that human beings have somehow established a civilized and rational world remains an illusion here—we’re all just animals, fooling ourselves that we have control. Szifrón exploits this delusion and seems to delight in it, telling stories where people are pushed to a comical, unsettling limit, at which point they snap. 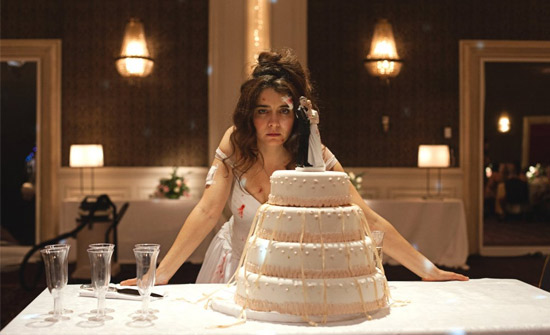 Looking at the credits, Pedro Almodóvar is listed among the producers, and the Spanish director’s production company El Deseo handled the film. How fitting, since Wild Tales contains a similar pitch-black sense of humor that isn’t above using violence as a sardonic punchline. And like Almodóvar, Szifrón has realized his stories with a rich aesthetic versatility that acclimates to the story at hand. Cinematographer Javier Juliá gives each tale a unique look and color palette, but his use of lenses and the fluidity of his camera movements make the six stories feel part of a whole. The themes, however, are pure Buñuel, as Szifrón comments on conditions in present-day Argentina, in particular the uneven division of power that finds the upper-classes preying on the poor. Then again, these themes are universal to any capitalistic society, which makes Wild Tales at once more engaging and in need of more cultural specificity. In some ways, the viewer doesn’t need to know anything about Argentinian society to watch this film, and maybe that’s a missed opportunity on Szifrón’s part to create awareness about a greater social issue at play in his country.

Indeed, the lessons to be learned remain uncomplicated, but Szifrón’s use of irony exaggerates otherwise relatable situations to macabre comic effect. When, in the fourth sketch, a beleaguered man (Ricardo Darín) finds his car unjustifiably towed, arrives late for his daughter’s birthday party, and is served with a divorce, all in one extraordinarily bad day that results from a parking ticket, the writer-director imagines that the character becomes a folk hero after he decides to blow up the DMV. Wild Tales isn’t a film that moralizes social problems; it does, however, expose our worst impulses and suggest that, if we find these stories somehow cathartic or relatable, there may be some self-examination needed. Then again, the final chapter maneuvers around the cynicism and body count of the earlier entries. At a wedding, a bride (Érica Rivas) realizes that her new husband (Diego Gentile) has cheated on her in the past, and she responds by having an instant tryst of her own, and then making a disaster of the reception. Even so, Szifrón suggests that some good may come from volatile emotions, as his bride and groom make up in front of the wedding guests.

Portmanteau films don’t often receive high critical praise; their reception is usually lukewarm at best, for the very reason of their episodic structure and typical unevenness. There’s always one or two that stand out, one or two that could be better, and maybe one that should be cut altogether. But Wild Tales manages to feel cohesive throughout, as Szifrón dwells on revenge, corruption, and the loss of control in always outrageous and entertaining ways. The film garnered plenty of attention after its debut at the Cannes Film Festival in 2014, and it enjoyed a hearty life on the awards circuit, earning BAFTA and Oscar nominations for the Best Foreign Language Film. Understandably so, since it taps into something universally human—our capacity to let our emotions get the best of us, reducing us to animals (which, of course, we are). On those terms, Wild Tales has been painted with a blunt object, using violence, anger, greed, and outrage as material for its canvas. Perhaps those are just the tools needed for a portrait of humanity.