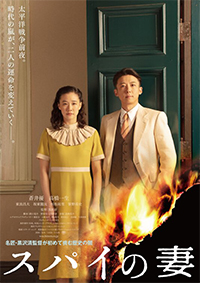 In Kiyoshi Kurosawa’s Wife of a Spy, a husband and wife make an amateur silent film and show a few friends in a private screening. Shot in black-and-white, their little movie is full of shadows and intrigue. The wife plays a thief who tries to break into a safe, and when someone she loves catches her in the act, she tries to escape and meets a tragic end. Their old-fashioned noir thriller suggests a romantic, stylistic alternative to the wartime espionage in Kurosawa’s film. Set in Japan in 1940, Wife of a Spy underscores the disparities between reality and fiction, embroiling its protagonist in a real-life melodrama that deviates from noir traditions. It’s a film that proceeds in the light of day since, in reality, spies hide in plain sight; they don’t lurk in shadows or wear domino masks. The wife isn’t the mysterious figure seen in her onscreen counterpart, and her end, while tragic, isn’t followed by “FIN” and sweeping music. Rather, Wife of a Spy considers real-world practicalities like apolitical capitalism and the encroachment of nationalism on the individual. If the husband and wife’s amateur film is a classical noir, Kurosawa’s film more closely resembles Chinatown (1974).

Kurosawa’s script, co-written with Hamaguchi Ryusuke and Nohara Tadashi, unfolds like a combination of Alfred Hitchcock’s Suspicion (1941) and Notorious (1946). Set in Kobe, the story follows Fukuhara Yusaku (Takahashi Issey), a wealthy and self-described “cosmopolitan” businessman whose dealings with a British contact earn him attention from his increasingly strident government. Yusaku’s penchant for Western clothing and whisky doesn’t help his case, nor does his sudden buying mission to Manchuria. His wife, Satoko (Aoi Yû), begins to suspect that Yusaku may have an ulterior motive for his trip—suspicions implanted by Taiji (Higashide Masahiro), her childhood friend who now serves in Japan’s military police. When Yusaku returns from his journey, a mysterious woman, a murder, and Yusaku’s refusal to share his secrets only escalate Satoko’s misgivings. Weary that Yusaku may be having an affair or working as a spy, or both, Satoko tries to talk to him about it. The conversation that ensues tests her trust for her husband, both as a partner and as a Japanese citizen.

Satoko discovers her husband’s agenda in time, and Kurosawa uses the turn to explore Japan’s inhuman experiments during the war. The horrific tests performed by Nazi doctors in concentration camps have been well documented and portrayed in cinema; similarly, Imperialist Japan conducted frightful research on predominantly Chinese subjects, such as injecting them with deadly bacteria to watch the results. When they were done, they burned the bodies in massive piles by the hundreds. While Kurosawa avoids depicting these incidents in reenactments, he shows brief glimpses of actual archival footage to address its reality. The rest, he leaves for his audience to discover. The footage, along with a translated record of the war crimes, also becomes a plot device. Yusaku reveals to Satoko that he’s working as a spy, and from her perspective, the spy games bring new life to their marriage. She’s happier than she’s ever been, helping her husband scheme to get the evidence into the hands of Allied forces. But as the title suggests, her lot isn’t to carry out some elaborate act of espionage but rather to bolster her husband, and her role in their defection proves less involved than she hopes. 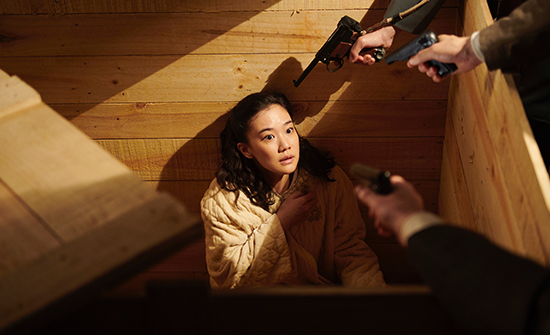 Compare Kurosawa’s film to Chinese director Zhang Yimou’s Cliff Walkers, another World War II spy-thriller imported into the US this year. Both were nominated in multiple categories in this year’s Asian Film Awards, both draw heavily from Hitchcock, both address Japan’s war crimes, and both come from celebrated auteurs working in the genre for the first time. Yimou offers a dazzling piece of entertainment, complete with elaborate sequences and bravado camerawork, but the film tows the Chinese government’s political line and results in a stunningly filmed work of propaganda. While less polished and a little clunky at times, Kurosawa’s effort doesn’t feel like a state-approved film. Quite the opposite. Some Japanese politicians would prefer to neatly pack away its less savory role in the war, making Wife of a Spy an unwelcomed, wound-opening reminder of the past. However, Kurosawa, who works on the mainstream’s margins, willfully acknowledges and critiques Japanese imperialism and its atrocities. His film aligns with his ongoing concern for the individual oppressed by society. And unlike Zhang’s, it feels like the work of an auteur—or at least a filmmaker allowed to have a critical perspective.

Still, the film has its problems. It takes a while to get going, and the intrigue feels undercooked. If Kurosawa meant to focus on Satoko’s internal struggle, he could have explored the layers of her and Yusaku’s marriage with more depth. Even so, Aoi Yû’s central performance grows with complexity as the film carries on, especially in the last half hour. Elsewhere, the few actors playing American or British characters speak with an awkward inflection, while Takahashi Issey is appropriately unreadable. Initially made for Japanese television, Wife of a Spy has a small screen appearance. The interiors and street scenes appear stagey, and the performers look like they’re wearing costumes. The mise-en-scène lacks the verisimilitude to carry the viewer away to Japan in the 1940s. Instead, we see crisp, clean wardrobes and spaces that seem un-lived-in—all shot with 8K HD cameras that create images vaguely resembling those of Masterpiece Theater productions, even though the film is stunningly photographed. If it’s meant as a counterargument to the husband and wife’s black-and-white amateur noir, it nonetheless occupies a different breed of cinematic artifice.

Wife of a Spy screened at last year’s Venice Film Festival, where it earned Kurosawa the Silver Lion for Best Direction. Strangely, the film’s subject and period are new to this director, whose output in the 1990s and 2000s mainly involved fringe genres and J-horror. In recent years, he’s become somewhat less predictable with the domestic drama Tokyo Sonata (2008), the paranormal romance Journey to the Shore (2015), and the Spielbergian alien invasion movie Before We Vanish (2013). But the viewer feels his perspective here, complete with his signature apocalyptic ending—an acceptance that Japan will inevitably fall, their cities left in fiery ruins. Satoko’s voice mourns with a sense of relief: “Now Japan will lose. The war will end. Bravo.” Finally, we’re left to wonder if Kurosawa feels Japan’s war crimes justified the US’s atomic atrocity. The answers don’t come easily; they actively resist simplicity. It’s war, after all.