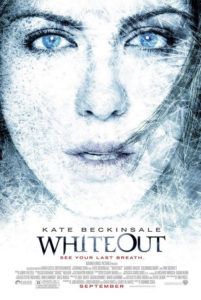 There’s nothing worse than a murder mystery whose twist you can see coming, and Whiteout gives away its secrets within the establishing scenes, making everything subsequent an incredible bore. As a result, Red Herrings and cheap thrills between the opening and the finale feel like pointless filler included just to boost the running time. Based on a graphic novel, like every movie these days, the movie will undoubtedly make the book’s writer Greg Rucka and artist Steve Lieber wish they had never sold the rights.

The only thing that might’ve restored the movie from its lack of mystery is interesting characters. For a successful whodunit, the viewer must be involved in finding each new clue, guided by the fascinating investigator. Sherlock Holmes was certainly more compelling than any of the cases he solved; the same goes for Phillip Marlowe and Sam Spade. Here, the protagonist remains emotionally frigid, rendering the whole effort cold as ice. Whether that was intentional, perhaps to reflect the barren landscape in which the movie takes place, who can know.

Kate Beckinsale plays U.S. Marshal Carrie Stetko, who’s been the law at McMurdo Station in Antarctica for two years, mostly dealing with petty theft. There’s never been a murder on the continent, and since they’re isolated on the most desolate landmass on the planet, it’s probably for the best that she doesn’t have too much work. Of course, she’s eventually tipped to a body that was evidently stabbed and pushed from a plane onto the ice. Her timeframe is limited, as she plans to return to the states on the next day’s plane, the last for a six-month winter rotation. She investigates, along with shifty-eyed, conspicuously helpful Dr. Fury (Tom Skerritt), and discovers a low-grade scheme involving more dead bodies, an old Russian plane buried under the ice, and mysterious metal cylinders filled with… jelly beans?

As the mystery unfolds, director Dominic Sena (Gone in Sixty Seconds, Swordfish) cuts back into Stetko’s past for a melodramatic presentation of what her pensive expressions are about. Apparently, something really bad happened when she was stationed in Miami. Scenes saturated in orange, to represent the contrasting climate, inform why Stetko sits and stares off into nothingness so often. The blame for this silly structural device goes to the four credited screenwriters for not conceiving of anything interesting for Beckinsale’s character to do, although the actress doesn’t help matters by overcompensating with her performance. Stetko’s loss of digits to frostbite, for example, is handled more like a bad breakup than a limb amputation.

The Antarctic setting—which this movie relies on as its sole marketing tool, seconded only by Beckinsale’s shower scene—never feels dangerous or very real because of how shoddily it’s depicted. During outdoor fight scenes, the environment is filled with what’s obviously computer-generated snow and gusts of wind. We’re supposed to believe it’s fifty-below out there. The movie shows us a cup of spilled coffee freezing instantly when it’s exposed to the elements, but then save for goggles, the actors’ faces aren’t covered when they’re outside. Shouldn’t their lips be falling off? Part of this is just poor attention to detail on Sena’s behalf, and part is so we can identify which blurry figure in the storm is Beckinsale and which is the killer by their stubble or lack thereof. Except, the overused CGI weather and choppy editing obscure their faces anyway, making this detail a pointless distraction.

So we watch unidentifiable snow-suited characters wrestle in a haze of white, and we’re supposed to be gripping our fellow moviegoers in the ensuing suspense. Ice-axes are waved about, the weather kills, and the clock is ticking. Danger is abundant in Whiteout, though there’s something seriously ineffective about a thriller whose plot keeps its audience more involved in the weather than its central murder mystery. If the weather is all you’re interested in, save yourself the price of a movie ticket and stare out the window.