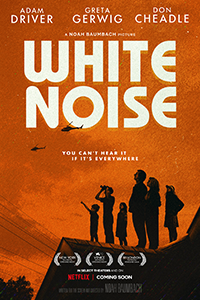 Noah Baumbach’s White Noise opens with a scene of a film professor, Murray (Don Cheadle), rhapsodizing about the tradition of car crashes in American cinema. Murray argues that scenes of vehicles smashing and exploding, often with a sense of one-upmanship from one example to the next, suggest a “spirit of innocence and fun” to what ultimately is a traumatic experience. In this, Baumbach, through Murray, underscores how death preoccupies and fascinates Americans, though we process such anxieties by, in this case, commercial entertainment that replaces legitimate fear with escapism. Baumbach’s choice to adapt Don DeLillo’s so-called unfilmable postmodern satire, White Noise, published in 1985, suggests the writer-director saw in the material a chance to comment on our times. The novel is a paranoid story about our obsession with death—from humanity’s role in environmental disasters to our preoccupation with impending doom—and how we distract ourselves with consumerism and other methods of diversion. The Netflix adaptation is no less relevant today despite its outmoded fashion, the backdrop of Reaganism, and well-stocked A&P grocery stores. It’s a germane and ambitious undertaking, unlike anything the filmmaker has made, and one of 2022 most intriguing films.