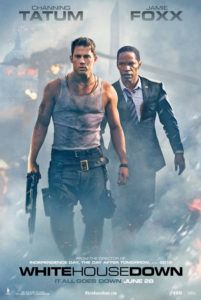 Of the dueling White House invasion movies released in 2013, the brainless summer blockbuster White House Down edges out March’s grave Olympus Has Fallen by not taking its absurd scenario too seriously. These strikingly similar titles follow the same basic story structure. Consider the likenesses: in both movies, a band of terrorists seizes the Presidential Mansion for hostage demands; both contain a traitor in the Secret Service whose master plan involves stealing lots of money and gaining access to nuclear launch codes; both include a scene where the flag atop the White House is knocked down, symbolizing the great national peril of the situation; both represent ineffectual American military personnel outside the White House gates powerless to help the captives inside; and both feature a rogue hero, a would-be Secret Service agent who saves the day all by his lonesome. There are more similarities between the two, but why go on? They’re both borrowing actioner DNA from Die Hard.

Roland Emmerich—director of Independence Day, The Day After Tomorrow, and 2012—once again brings the world to the brink of destruction, only to leave us feeling safe and sound. Just as corny and ham-fisted as his earlier films, Emmerich’s mildly light-hearted PG-13 approach on White House Down at least has a streak of fun running through it, unlike the bloody, mean-spirited, R-rated experience of Olympus Has Fallen. Anyone familiar with Emmerich’s body of work knows exactly how he operates (outside of his refreshingly smart turn on the underseen Anonymous in 2011), and he doesn’t deviate from his usual schema here. The movie follows Emmerich’s prototypical path where the mass destruction of various iconic monuments inspires awe-faced onlookers to regard the horror with amazement; also, his first act is drawn out, his cheesy characters utter sloppy dialogue, and his third act feels rushed and sloppily assembled. These qualities apply to almost every film bearing Emmerich’s name. At least he’s consistent.

Channing Tatum stars as former soldier John Cale, who now serves as part of the security detail for Speaker of the House Raphelson (Richard Jenkins). To impress his precocious 11-year-old, Emily (Joey King), Cale arranges to interview for a Secret Service job with department head Agent Finnerty (Maggie Gyllenhaal). He doesn’t get the job, a fact which he hides from his daughter when they take a White House tour. At the same time, President Sawyer (Jamie Foxx, playing a thinly veiled Barack Obama), is nearing peace in the Middle East with a new treaty. All at once, a group of shady mercenaries headed by Jason Clarke (from Zero Dark Thirty) make their way into the White House and blow up the Capitol building. President Sawyer evades capture and meets up with Cale, who keeps our commander-in-chief safe by hiding out in elevator shafts and other such hiding spots. All the while, we know James Woods’ shifty-eyed Head of the Presidential Detail is behind it all because he’s the character who took off his American flag pin that morning while ominously regarding himself in the mirror.

As the story plays out, Cale takes out the bad guys one by one, quipping along the way. Outside of a Steven Soderbergh film (see Haywire, Magic Mike, or Side Effects), Tatum has almost no ability to emote, and his dead-faced expressions are a far cry from the humanity given to the heroic one-man-against-a-group-of-terrorists role originated by Bruce Willis in Die Hard. Foxx’s presidential airs as Sawyer are enlivened by some comic attitude (“Get… Your… Hands… Off… My… Jordans!”), but he’s hardly as loveable a movie president as Michael Douglas, Kevin Kline, or Harrison Ford. Outside, serious-faced officials (Jenkins, Gyllenhaal, Lance Reddick, Michael Murphy) debate jurisdictional nonsense and scramble to launch botched helicopter attacks. Action movie rule: If there’s a helicopter involved, it’s probably going to explode or crash-then-explode. Here, about five helicopters explode.

Screenwriter James Vanderbilt (The Amazing Spider-Man) has reached deep into the bag of overused movie clichés, and Emmerich has embraced said clichés wholeheartedly. For example, how many times have you seen the following circumstances play out: Early in the movie, a character introduces an item (book, pin, trinket, pocket watch, etc.) which is kept in their breast pocket; later on, that character is shot, but they’re miraculously saved because the item in their pocket has taken the bullet. Or what about a silly plot device used to movie-ruining effect in The Lost World: Jurassic Park, where the little girl who failed her gymnastics tryout proves she should have made the cut by swinging on parallel bars into a Velociraptor? Well, there are no Velociraptors in White House Down, sadly, but there’s a little girl whose talent show doesn’t go well, and late in the movie, she proves her flag-twirling abilities are up to snuff—just as Cale proves himself worthy of the Secret Service job he didn’t get. It’s all eye-rollingly stupid.

Regardless of how “meta” Emmerich tries to be by referencing his own movies (an annoying White House tour guide remarks, “Yes, the Capitol building dome is the one that blew up in Independence Day.”), this formulaic material in no way reaches beyond its own limitations. Never does White House Down surprise us or go in a direction we didn’t see coming. It’s all been manufactured to proven specifications and refuses to deviate from customary action movie schematics. Every predictable twist plays out in the expected fashion, so we’re left to enjoy only the blandly amusing performances and the mindless popcorn-munching escapism of the action itself. Admittedly, Emmerich assembles two or three diverting sequences, as he’s capable of delivering clear-cut action to some extent—he doesn’t rely on today’s overused, garbled shaky-cam methods. But, clocking in at 2 hours and 11 minutes, the movie drags on and on, giving us plenty of time to reflect on the formulaic quality of everything onscreen. And since we’ve seen this all before in various forms, from Die Hard to Air Force One to Olympus Has Fallen, the ending can’t come soon enough.