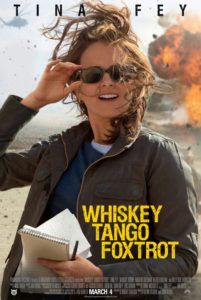 Just as Robin Williams added a layer of dramatic intensity to his comic persona in Good Morning, Vietnam (1987), Tina Fey broadens her horizons with Whiskey Tango Foxtrot. Fey produced alongside her SNL compatriot Lorne Michaels and for the story, Robert Carlock, one of Fey’s writers on 30 Rock and Unbreakable Kimmy Schmidt, adapted The Taliban Shuffle, journalist Kim Baker’s 2011 memoir about her time covering stories in Afghanistan and Pakistan. The filmic result depends far too much on comedy and Baker’s biographical throughline, and almost completely washes over the political impetus behind the U.S. being in Afghanistan for Baker’s time there, from 2003 to 2006. Although the film itself is undecided about whether it wants to be a comedy, a romance, or a wartime satire, Fey remains charming as ever and washes over the material’s inconsistent approach.

Fey plays Baker, a reporter with no serious real-life attachments and in need of something new. With a brief goodbye to her boyfriend (Josh Charles) and the promise of returning in three months, Baker catches a plane to Kabul. She’s assigned a security detail and a “fixer”, the latter of whom, Farouk (Christopher Abbott), also translates, with a filter anyway. Subtitles tell us that a screaming Afghan woman addresses Baker by saying “Cover yourself, you shameless whore!” But as Farouk explains it, “She said, ‘Welcome to Kabul.'” Once inside her press frat house, she befriends the only other female reporter, the risk-taking Tanya (Margot Robbie), as well as Iain (Martin Freeman), an overconfident Scotsman. Meanwhile, she’s told by the resident military presence, the marine General Hollanek (Billy Bob Thornton), that she’s not to sleep with any of his men. After all, as Tanya explains, “You’re a 6 in New York, but in Kabul you’re a 9-and-a-half. ”

Underestimations of Fey’s looks aside, the film meanders along, showing us how the journalists grow dependent on the danger and excitement Kabul brings. It’s like an addition, and they always want more. At the same time, Baker censures her network for not showing more of what’s going on in Afghanistan; however, the filmmakers deserve the same censure. Regardless of several shootouts and amusing interactions with local political figures (the attorney general is played by Alfred Molina), Whiskey Tango Foxtrot never delves into the politics or real issues shaping the Afghan political landscape. Ultimately, not being able to bring her American viewership the stories that matter leads Baker to clash with her network and, by the end, leave to start her own news program. One cannot help but wonder what the real Baker thinks of a film that showcases her own story over the setting that helped sculpt her current revitalized outlook on journalism and world politics.

As a comic satire about a female correspondent in Afghanistan whose life is changed by the experience, Whiskey Tango Foxtrot serves its audience by delivering several hilarious and even somewhat heartening moments. Directors Glenn Ficarra and John Requa (Crazy, Stupid, Love) manage to find rom-com situations in the strangest of places, while they restrain from digging into the violence and danger of the area in any specific detail. Several scenes show us the potential risk to Baker, being a woman in a place that’s historically unfavorable to women’s rights, whereas Tanya narrowly survives a drone strike from mere yards away. Perhaps the filmmakers hoped to channel something like Robert Altman’s MASH (1970), in which there’s barely a mention of the Korean War, just the absurd antics had by the American doctors on staff.

As you might’ve guessed, the title Whiskey Tango Foxtrot is a reverse acronym for “WTF”—doubtless, you already know what that means. It would be easier to write a more positive review if the film contained no sense of seriousness whatsoever, but that’s not the case. Intermittent moments showing the peril and atrocity creep into the comic milieu, feeling underdeveloped and somewhat obligatory. Luckily, Fey’s onscreen presence shows Baker as a sympathetic and endearingly flawed individual. She’s intelligent, funny, and effectively leads this film about a woman’s self-discovery. Less important are questions of journalistic ethics or political acknowledgment, notions that remain underdeveloped in this otherwise entertaining story about a female reporter fighting for integrity in one of the world’s most women-unfriendly countries. Although that’s an unfortunate reality of the film, it doesn’t entirely spoil our enjoyment.