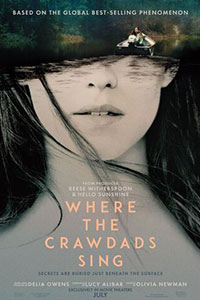 With its “Reece’s Book Club” sticker and a storyline that involves both a love triangle and a courtroom drama, author Delia Owens’ Where the Crawdads Sing became a major best-seller during the height of COVID-19. The book shattered all sorts of records in the publishing industry, and in the subsequent pandemic years, Owens’ debut outsold competition from Stephen King, John Grisham, Margaret Atwood, and Nicholas Sparks. In all transparency, I haven’t read the book. And sitting down to the movie, I knew only vaguely of its popularity and nothing of its story. Afterward, I was surprised to learn the book isn’t categorized as young adult fiction. In its screen form, the coming-of-age story recalls so much of Stephenie Meyer and Suzanne Collins, where a young woman, an outsider, finds herself caught between two hunks while facing threats from the establishment and uncovering personal revelations along the way. Exchange vampires or a post-apocalyptic setting for the marshes of North Carolina in the mid-twentieth century, and you have yourself a Harlequin Romance inflected with zoology, Southern charm, and a banal murder mystery.

Neither a compelling romance nor a convincing whodunit, the movie has the styleless feel of many best-seller adaptations. Filmmakers often resist making bold choices when translating from page to screen, fearing that readers will reject any cinematic flourishes that don’t align with their mental image of a book’s events. The goal of some adaptations, then, seems to be creating a movie so generic that readers will unconsciously project their experiences with the book onto the blank-canvas film and re-experience the book on screen. Where the Crawdads Sing fulfills that demand nicely. Director Olivia Newman delivers a competent-looking production, and cinematographer Polly Morgan (A Quiet Place Part II) captures some gorgeous scenery from the location shooting around Louisiana. The performances are generally good, especially the lead, and the plot will hold your attention well enough. But somehow, the movie doesn’t have a vibrant life of its own, suggesting it has been crafted for established fans who will imbue the experience with what the filmmaking lacks, leaving those like me unconverted.

For the uninitiated, the story takes place primarily in 1969 around the winding marshes of Barkley Cove, North Carolina. The opening shots follow a CGI crane that flies from the marsh to the ocean to the swamp, surveying terrain that will become important later. The intrigue begins at the bottom of a fire tower, where some locals find the dead body of Chase, a young man said to have been in a relationship with the “Marsh Girl”—a solitary young woman who lives on the margins of town. This is Kya (Daisy Edgar-Jones, excellent in this year’s Fresh), an intelligent and artistic amateur biologist who makes lovely drawings of the animals she relates to most: birds, because she likes her freedom; shells, because she lives in one; and insects, because they have no politics. Kya is blamed for Chase’s death and put on trial for murder. Her defense attorney, the kindly Tom Milton (David Strathairn), must work her case despite her unwillingness to speak up or confront impossible prejudices from locals who believe she’s a witch or a mystical swamp thing. 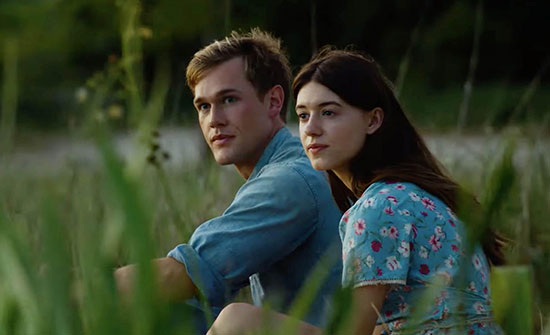 Then the story leaps back to 1953 during Kya’s troubled upbringing. Abandoned by her mother and four siblings, she must contend first with her abusive father (Garrett Dillahunt), a hermetic World War II veteran and alcoholic, then with fending for herself when he abandons her. A kindly couple (Michael Hyatt, Sterling Macer Jr.) helps her along, but Kya maintains a solitary life in the marsh. This is familiar territory for screenwriter Lucy Alibar, who co-scripted 2012’s similarly themed Beasts of the Southern Wild. Alibar takes us inside Kya’s head with periodic narration, where our protagonist ruminates about the circle of life, and how in Nature, there is no sin, only natural selection. The YA of it all involves Kya’s two beaus, Tate (Taylor John Smith) and Chase (Harris Dickinson). The former comes from river life, and the latter is a townie who feels misunderstood. The two actors look practically identical; thanks only to Tate’s blonde highlights, I could tell them apart. Over time, Tate teaches her to read and encourages her to publish her artwork, but he abandons her for college. With Tate gone, things get steamy with Chase, but he turns out to be trouble.

Newman and editor Alan Edward Bell alternate between the backstory and courtroom scenes, a tactic designed to create tension about the central question: Who killed Chase? But the viewer never feels much concern that Kya will be convicted. The prosecutor (Eric Ladin) has pretty lame evidence, so Milton doesn’t have to try all that hard to convince the jury of Kya’s innocence. There’s no dramatic testimony or revelations in the courtroom, thus the viewer of Where the Crawdads Sing feels no real anxiety over Kya’s fate. When it’s eventually revealed what happened to Chase, it’s less an answer to a lingering question throughout the film than another facet of Kya’s interior life. Structurally, the court case becomes a deflated excuse to put Kya’s lifestyle on trial against the so-called normal lifestyles of the townies, who should be envying that the Marsh Girl looks so much like a model despite living, you know, in a marsh. Meanwhile, no one, not even Kya, addresses the cruelty of the natural world. Her life is committed to observing, documenting, and cherishing the creatures of the marsh, and she blissfully ignores how savage Nature can be. Werner Herzog would be disappointed. If her life were a documentary, it would be one that conveniently cuts away when a predator corners its defenseless prey.

Although the last-minute twist feels like a cheap trick, I liked what it said about Kya, suggesting that some part of her remained a lifelong secret, contentedly free within her own shell in the expansive marshes. But I never felt wholly connected to Kya; whether it’s Newman’s direction or an issue with the source material, I cannot be sure. I suspect that we were supposed to view Kya the way she sees her natural specimens—a creature that inhabits Nature, with an almost biological imperative in that world. We can observe her behavior and appreciate her beauty as spectators, but we cannot bottle her. And we cannot fully understand her mind any more than we can fully understand a bird’s thoughts. If that’s true, then narration seems like a counterintuitive choice. Owens’ third-person book doubtlessly kept an appropriate distance, and the film perhaps should have created more mystery about the character. All of this is overshadowed by the fact that Owens was questioned about but never charged with the real-life murder of a poacher in 1995, leading to all manner of fascinating and troubling questions about the book’s origins and how much Owens put herself into Kya.

Undoubtedly, fans will tell me that I would like the movie more had I read the book. Maybe that’s true. But my critic’s brain tells me that I shouldn’t have to read a book to enjoy a movie, and I think it’s right. Unless of course, the filmmakers intended the adaptation as a multi-textual experience like David Cronenberg’s 1991 film Naked Lunch (though, I suspect they did not). Instead, Where the Crawdads Sing is a sentimental crowd-pleaser. It’s also a silly fantasy that avoids any of the ugly realities of mid-century America in the South to a troubling degree. 1969 was one of the most disruptive and volatile years in American history, yet Kya manages to live in her bubble and avoid all that, pure and almost saintly in her commitment to Nature. Escaping the realities of humanity is a pleasant notion, to be sure. Perhaps that’s what attracts readers to the material. Their secret wish of living independently among butterflies and birds is an idyllic dream. But in its present form, the story lacks a compelling thrust and treatment.