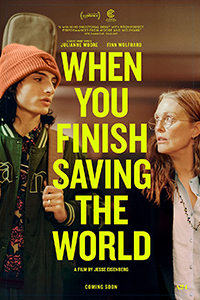 Jesse Eisenberg makes his debut as a writer-director with When You Finish Saving the World, an indie dramedy reminiscent of the actor’s breakout role in Noah Baumbach’s The Squid and the Whale (2005). Both feature a teen boy whose privileged and accomplished parents loom large, and in his effort to stand apart and gain the attention of a girl his age, he resorts to some less-than-authentic behavior. But Eisenberg’s feature deals with other familiar themes, such as families whose members have different priorities and even ideologies. In our increasingly divisive culture, everyone has someone in their family who voted for the wrong candidate or supports a policy others don’t. Eisenberg’s film explores how those family members might relate to one another, at first with the volatility befitting a dysfunctional dynamic, but eventually, with a sense of understanding and open-mindedness. Far more optimistic and thematically obvious than Baumbach’s film, When You Finish Saving the World is a mostly light affair anchored by two strong performances from Julianne Moore and Finn Wolfhard.

The story centers around the Katz family. Evelyn (Moore) and Roger (Jay O. Sanders) live a comfortable life in Indiana, where she runs a shelter for survivors of domestic abuse. But Evelyn’s seemingly selfless profession gives her the ammunition to judge others, often through barbed passive aggression, given the moral superiority of her cause. Her main target is Ziggy (Wolfhard), her teenage son. His existence revolves around an online community, where he livestreams for an audience that showers him with upvotes and likes, which translates into income. He plays sincere but novice acoustic songs about graduating from junior high and the girl he likes at school, and for him, there’s nothing more important than his 20,000 subscribers—a stat he regularly shares, unprompted. Even so, Evelyn remains dismissive toward Ziggy’s passion, and he responds with grating teenage outbursts (“I’m going to be rich, and you’re going to be poor!” he declares with petulance).

The seed of Eisenberg’s film was planted with his pandemic project—the five-hour Audible original of the same name, featuring some of the same themes and a family also called the Katzes. Both the film and audio production feature Wolfhard as Ziggy, and the actor is no stranger to livestreams; he had an online presence well before his appearance on Stranger Things. Moreover, according to the press notes, Eisenberg’s late mother-in-law ran a shelter in Indiana, and her example inspired him to ask questions about whether creating pop content for the masses is a worthy endeavor compared to people who put so much back into their community. Eisenberg’s screenplay seems to weigh whether his work in commercial fare, such as the Zombieland and DCEU movies, has an important place in the world. Yet, even while exploring those issues in an unsubtle way, he crafts some memorable characters. 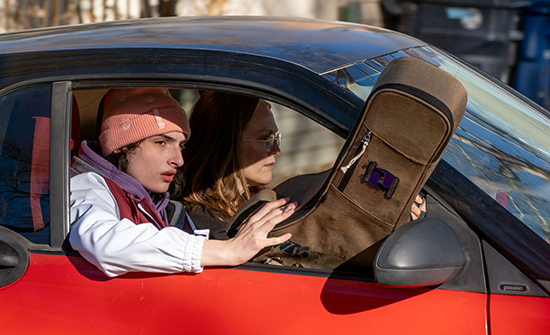 The most complex of them is Evelyn, whose noble cause doesn’t change the fact that she’s awkward in every human interaction. In an early scene, she scolds her employees for their office birthday party and then, realizing her behavior, strains herself to offer a halfhearted “Congratulations on your birthday.” Resentful that Ziggy isn’t more like her, Evelyn fixates on a teen boy, Kyle (Billy Bryk), staying at the shelter with his mother, and she oversteps boundaries with Kyle in cringey, smothering ways. But Ziggy is no better. He’s quick to tell his parents to “shut the fuck up,” and his angsty behavior includes drilling a red light onto the living room wall, altering his family that a livestream is in session. Similar to his mother’s obsession with Kyle, Ziggy fixates on Lila (Alisha Boe), a politically engaged teen girl for whom he attempts to “be political.” Still, it’s apparent that his efforts amount to nothing more than a superficial courtship gesture. In the middle is Roger, who calls out Evelyn and Ziggy for being a “couple of narcissists”—performed with pitch-perfect deadpan humor by Sanders.

Shot on 16mm by After Yang (2022) cinematographer Benjamin Loeb, When You Finish Saving the World has a vaguely wobbly and naturalistic feel, accompanied by a warm, yellowish hue that makes everything look comfortable and lived in, lending the film a curious throwback appearance. This is accompanied by Emile Mosseri’s largely electronic score, recalling an 8-bit video game—a curious choice, given the modern setting. But there’s an evident aesthetic cohesiveness behind the filmmaking, which doesn’t pronounce itself and allows the characters to remain central. Still, some of Eisenberg’s choices when depicting youth culture remain unconvincing. Ziggy’s persistent habit of complimenting something by calling it “so lift,” in a version of “mint” or “cool” that I suspect Eisenberg invented for this film, proves overdone. The high school milieu, which features political teens singing Dust Bowl songs, also feels like an outsider trying to capture teen life and getting it wrong.

Though Eisenberg delivers confident filmmaking and directs some strong performances—particularly Moore’s terrific turn—his dramaturgy cannot help but feel stagey. When You Finish Saving the World finds Evelyn and Ziggy on similar paths in a manner that feels overly ordered and contrasts with Eisenberg’s otherwise natural choices. Mother and child parallel each other in how they share mutual animosity, fixate on someone else in unhealthy ways, and eventually return to each other in a conveniently timed resolution. The final moments feel unconvincing in their dramatic full circle, though they contain a worthy message about trying to understand different perspectives. Eisenberg tells us that not only should parents be more involved with their children’s interests, but children should invest in learning about their parents. Ultimately, the film reveals the value of a little less self-centeredness and a little more understanding within a family, but Eisenberg’s palpable thematic drives sometimes rob his characters of their authenticity.