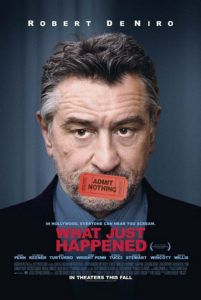 Producer Art Linson’s filmography demands attention. Having worked closely with Brian De Palma (Casualties of War, The Untouchables) and David Mamet (Heist, Spartan) on a number of projects, he also supplied the backbone for risky ventures like Fight Club and Into the Wild. Linson is a behind-the-scenes figure who, even if you’re well versed in film trivia, might have eluded you. His book What Just Happened?: Bitter Hollywood Tales from the Front Line details Linson’s experiences with primadonna actors, nervous agents, and ball-breaking studio executives, providing the basis for Barry Levinson’s new film What Just Happened.

Robert De Niro stars as Ben, a veiled caricature representing your average troubled Hollywood producer who juggles his personal problems and professional failings. The test screening for Ben’s latest film, a Sean Penn vehicle entitled Fiercely, did not go so well. Preview audiences shrieked when in the final scene, the film’s crooked gangsters shoot the dog in the head. And if there’s one thing that will instantly turn your audience against you, it’s shooting the dog. Driving home from the preview, Ben listens to Ennio Morricone’s Once Upon a Time in the West soundtrack, which fatalistically harmonizes the duel between the audience’s test scores and the producer whose neck is on the line. When he eventually reviews the audience’s comments, the most subtle complaint reads, “My wife is still crying, asshole!”

And then there’s the big-budget actioner Ben’s producing. Bruce Willis is signed to star, and shooting begins Friday, but Willis arrives onset overweight and sporting a bushy beard. Who gets the lousy job of telling their megastar the production will shut down unless Willis shaves and gets into shape? Certainly not Willis’ cowering agent Dick Bell (John Turturro). Certainly not the backers threatening to sue for misrepresentation if something resembling John McClane doesn’t magically appear.

Cluttered and confused, Ben gets through the chaos by self-delusions and empty promises, placing his friends and loved ones on hold for a business call. He waves off alarming test scores to biting studio exec Lou (Catherine Keener) with the “it’s only a number” defense. He tries desperately to avoid confronting Willis, until he’s forced to do so. And then there’s his personal life. He and his ex-wife (Robin Wright Penn) are seeing a marriage counselor to assist with their separation, but since “progress” means separating further, it hardly seems like an accomplishment. And his teenage daughter (Kristen Stewart) has some dirty secrets involving a fellow producer-turned-suicide.

Rumor has it Linson’s book was based on his experiences sorting out Alec Baldwin’s sudden weight gain before filming The Edge. But Linson offers none of the juicy details and name-naming that would have made the movie worthwhile. Every possible punch is pulled, every character a disguise for the real one, and every bit of commentary diluted. The progression of bad behavior and power-plays serves as redundancy since we’ve seen Hollywood satires before. Levinson himself directed a prime example of one back in 1997, called Wag the Dog, again with star Robert De Niro. That film at least had sense enough to exaggerate itself to make the point. By the end of What Just Happened, I was indeed wondering what just happened, or at least what the point was.

De Niro does the best he can with a role written as an empty vessel. His character is prey acting like a predator, selling himself out at every opportunity just to get by. Sympathizing with him is impossible. At every turn, he switches on a different level of pathetic groveling, which of course is the central task of a movie producer, but makes for an uninteresting character in a movie without an overlying arc. There is no arc for Ben. He floats safely in the business until a bigger fish emerges from below to swallow him up. Despite lending the part his natural presence and demanding mild pity, De Niro sleeps through this one.

The great Robert Altman made a similar film in 1992 called The Player, which names names, doesn’t pull punches, and wouldn’t know how to be roundabout in its Hollywood commentary. Altman’s very direct work provides the antithesis to a “safe” satire like What Just Happened.  The behavior therein doesn’t surprise us, the allusions are almost nonexistent, and the average viewer will find themselves indifferent.  About the only appeal is watching the long list of celebrities in the cast poke fun at their industry—a small time consolation considering how sharp this film could have been.