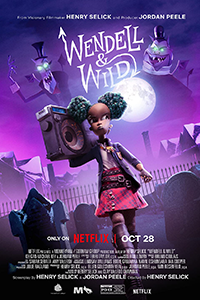 Henry Selick must have the most overlooked name in animation history. Few directors have been responsible for so much memorable stop-motion output, whereas his collaborators—Tim Burton, Roald Dahl, Neil Gaiman—often draw attention away from Selick’s helming of The Nightmare Before Christmas (1993), James and the Giant Peach (1996), and Coraline (2009). Even so, each example features a distinct visual style, rhythm to the movements, tactile details, surreal logic, and use of color and shape that accumulate into “a Henry Selick film.” Wendell & Wild, his first feature in thirteen years, finds him paired with another name that might prove distracting. This time, Jordan Peele serves as co-writer, producer, and voice actor alongside Selick. But rather than adapt someone else’s material, Selick directs a screen version of the unpublished book he co-wrote with Clay McLeod Chapman. Peele’s influence appears throughout the proceedings, but there is, at the very least, no suppression of Selick’s name on this Netflix-backed production. Yet, much of Selick’s considerable artistry has been jam-packed into a story that never quite achieves harmony with its visual presentation.